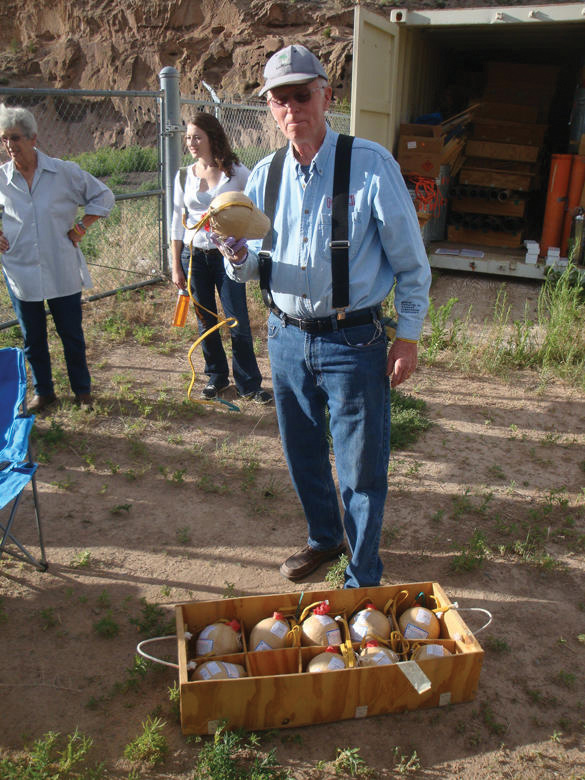 Fireworks Committee Chairman Pat Soran, demonstrating squibbing, checking, and boxing. A box of three-inch shells is in the forground. Photo by Don Casperson

During the 2016 Kiwanis Fourth of July Fireworks next week, about 4,470 shells will go up into the air. That’s a record—and it’s the payoff for the generosity of people who donated as they came into Overlook Park for the fireworks a year ago.

Not every person understands, as he comes through the gates into the park, that the donations collected by Kiwanis volunteers make it possible to have a good show 12 months later (and even new Kiwanis members need a while to understand the complexity of the preparation).

However, that “great show a year down the road” is the reason that Kiwanis is asking this year—as it has in the past—for teens and adults entering the park to donate $5 each. Children 12 and younger are free.

In some communities, the city pays for Fourth of July fireworks, but that has never been true here. In Los Alamos, Kiwanis collects donations and determines how many shells it can afford to buy for the next Fourth. Los Alamos County, in turn, provides the venue for the show and Police Department and Fire Department support to make sure the people in the park are safe.

The vast amounts of volunteer effort necessary to put on the show are a gift from Kiwanis to the community—and the work for 2016 is already well under-way.

Pat Soran, chairman of the Fireworks Committee, said in a telephone interview June 26 that a truck and trailer from Fireworks Production of Arizona in Chandler, Ariz., dropped off the Los Alamos shells on June 21.

It then drove on to Taos, where pyrotechnicians had also ordered fireworks.  Several Kiwanis members and friends—Soran, John Arrowsmith, Roger Stutz, and Kathy Boerigter—unloaded the thousands of Los Alamos shells from the trailer and loaded them onto county “mules” (all-terrain vehicles). County drivers then transported them to the Kiwanis magazine, where the Kiwanis volunteers once again unloaded them and placed them in storage.

Soran said that at 9 a.m. Sunday, June 26, Kiwanis volunteers met at the storage area again and “did inventory of all of our shells,” following Department of Justice regulations. (A record must be kept showing where and when each shell was built.)

Once the inventory was done, Soran said, another group of volunteers—John Arrowsmith, Soran, Soran’s wife Ann Hayes, and “our two grandchildren, Emily Hayes Rich, a 19-year-old sophomore at Lewis and Clark College, and Nathan Hayes-Rich, 16, a junior at Santa Fe Preparatory School,” got a head start on “squibbing”—placing electronic fuses in each shell to greatly improve its chance of going off as planned instead of becoming “a dud.” A total of 144 five-inch and six-inch shells were squibbed.

Another group of volunteers planned to gather at 8:30 a.m. on Saturday, July 2, to squib the smaller shells. It’s a long, intricate process, but those who volunteer find it fun to work and talk together. Some have called it “a sewing circle with explosives.”

Meanwhile, Kiwanis member Rick Reiss has prepared and computerized the program for the show, and he and Soran have laid out the “rails” where shells will be wired into the system. They have tested and retested the system (in Reiss’s garage) to make sure that all will go as planned.

On the Fourth, Kiwanis volunteers will take all of the shells out of storage, put them on a flatbed truck, and transport them to the firing site, where they will be wired to the rails.

Members of Key Club, the Kiwanis high school affiliate organization, have been selling tickets to “Best Seat in the House.”  When it gets dark on the Fourth, about 9 p.m., those with the winning tickets will push one button at the appropriate time and start a sequence that will paint the sky with beautiful colors, non-stop, for 30 glorious minutes. Their “seat” will be right alongside the Kiwanis volunteers who wired up the shells.

At the end of the show, still more Kiwanis volunteers will break down the firing system, load all the equipment back onto the flatbed, and take it back to storage. They will also start the cleanup process.

For those who love fireworks, this is enough—but over the years, many other activities have become part of the day.

Steve Boerigter, chairman of the Kiwanis Fourth of July Festivities, said that once again this year, from mid-afternoon on there will be booths with food and drinks and information available. There will be music. And “Ton o’ Fun” from Bernalillo will have a bouncing house for children.

Los Alamos buses, based at Sullivan Field in Los Alamos and at the Visitor Center in White Rock, will be available for those who don’t want to drive or walk to the park. (A schedule will be published in advance.)

Kiwanis Treasurer Cindy Eaton has rounded up a large crew of Kiwanis volunteers who will man (and woman) the pedestrian and motor-vehicle gates, asking for donations while trying to answer questions and keep the line moving. If all goes as expected, by the time the fireworks start, more than 8,000 people will have arrived at the park—and money will be in hand to pay for the shells that will be ordered for 2017.