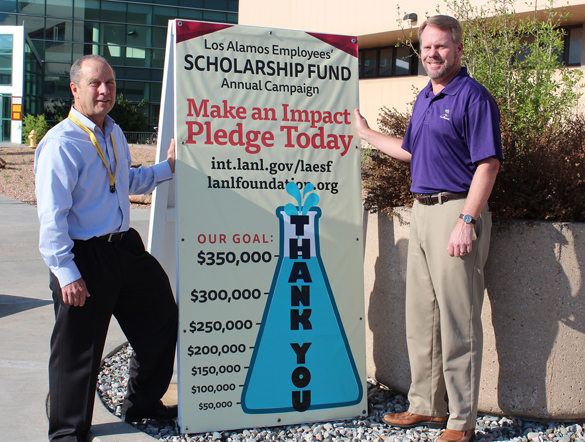 Of that amount, 910 LANL employees, contractors and visiting scientists contributed $357,835.40, surpassing the $350,000 goal set by LAESF. Los Alamos National Security, LLC (LANS) provided a $250,000 match of employee donations. The additional $5,353.10 came from special events and contributors outside the Laboratory.

“Thank you to all who contributed during the campaign,” said Fox. “The scholarships funded by our donors help to create education and career pathways of opportunity for many exceptional students, and reduce the need for student loans and burden of debt after graduation. The positive impact of LAESF truly echoes far beyond a single generation.”

In 2014, 620 LANL employees contributed $327,000, marking a 46 percent increase in participation this year. Steve Girrens, Associate Director for Engineering Sciences at the Lab and campaign champion, said he is pleased by the significant increase in donors and contributions.

“Thank you to the loyal repeat supporters and to the new donors who together lifted our participation level to record heights,” Girrens said. “The generosity of LANL employees and LANS continues to create scholarships for local students, investing in Northern New Mexico and the future Laboratory workforce.”

The 2014 campaign funded 85 scholarships totaling $422,500 awarded to 78 students so far in 2015. Winners of the Tribal Business Scholarships and the second round of Regional College/Returning Student awards are soon to be announced.

Students receive awards ranging from $1000 to $20,000 during a ceremony at the LANL Foundation office in Española. A list of winners may be found at www.LANLfoundation.org/scholarships, where contributions from the general public may be made year-round.

The Los Alamos Employees’ Scholarship Fund program began in 1998 to support students and encourage higher education in the vicinity of the Laboratory. The program serves the seven counties of Los Alamos, Mora, Rio Arriba, San Miguel, Sandoval, Santa Fe, and Taos. The fund is managed and administered by the Los Alamos National Laboratory Foundation with oversight by an advisory committee of donors.