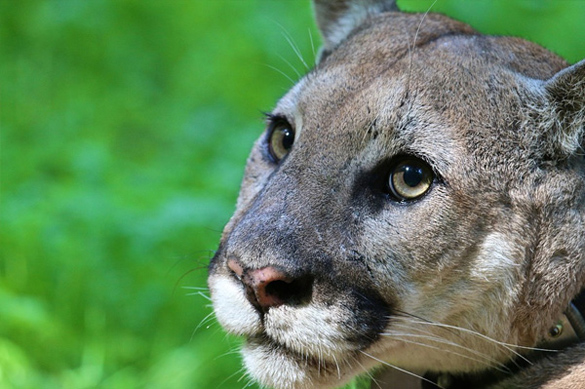 Hikers should be on the alert and take care when walking dogs as cougar trapping got underway Nov. 1 in portions of Los Alamos County and across New Mexico. Courtesy/apnm.org

The practice of wildlife trapping and snaring has caused enormous controversy and concern across the state. In an August 2015 statewide poll, New Mexicans opposed the Cougar Rule and the practice of trapping and snaring on public lands by a three-to-one margin. Traps and snares are indiscriminate, routinely capturing non-target animals such as dogs and endangered species of similar size sharing the same habitat.

The new policy permits trapping and snaring on approximately nine million acres that spread across nearly every county in New Mexico and that include habitat of endangered Mexican wolves and jaguars and relaxes permit requirements that previously provided a check on setting traps and snares on privately owned land.

Steel-jawed leg-hold traps operate using a spring-loaded trigger mechanism that closes two metal jaws—which typically spread nearly eight inches wide—around the leg of an animal that steps in the pan in the middle of the trap. Foot snares operate using a metal arm holding a coiled spring that throws a looped metal cable around an animal’s leg or foot and cinches the cable tightly, causing great pain. Captured animals often exacerbate their injuries while thrashing or chewing the trapped limb in order to escape.

Animal Protection of New Mexico, The Humane Society of the United States, and concerned New Mexico citizens are challenging the policy in state and federal court. Citizens involved in the litigation include longtime wolf enthusiasts and advocates, rescuers who run Search and Rescue missions, and a professional hunting and fishing guide.

The plaintiffs argue that the Game Commission approved the Cougar Rule recklessly and arbitrarily, having ignored and misconstrued the best available science, creating an unacceptable risk from traps and snares to search and rescue animals, companion animals and their guardians, and nursing cougar mothers and their kittens who are required to be protected under the same state regulations. The plaintiffs also argue that expansive cougar trapping across the state presents a mortal and unlawful threat to endangered Mexican wolves and jaguars because they will inevitably be caught in indiscriminate traps set for cougars, in violation of the federal Endangered Species Act.

“Allowing people to scatter these barbaric devices across the state to maim and kill protected cougars, endangered species, companion dogs, and countless other animals is unacceptable. The New Mexico Game Commission completely ignored science and ethics when it approved this reckless and extreme policy of recreational cougar trapping,” said Jessica Johnson, chief legislative officer for APNM. “We’re committed to using every legal and legislative tool possible to right that wrong.”

“The Commission’s expansive authorization of recreational cougar trapping is an unsupported and unlawful experiment that will not only cause unnecessary suffering to cougars—including mothers and their cubs—but also illegally expose some of the most endangered animals in North America to death and injury in traps,” said Anna Frostic, senior wildlife attorney for The HSUS.

Although the current annual cougar harvest limit is set at 749, no more than 300 cougars have been killed for sport or depredation in any year since 1981, when NMDGF began tracking cougar mortality numbers. Opponents of the Cougar Rule are supported by the nation’s top cougar biologists, who assert that the harvest limit is dramatically higher than is sustainable according to the best available scientific studies and that the State Game Commission is unjustifiably seeking to radically increase the numbers of cougars killed annually.

The Albuquerque Journal’s Editorial Board recently condemned the new trapping regulations and the state’s waste of taxpayer dollars defending the regulation.