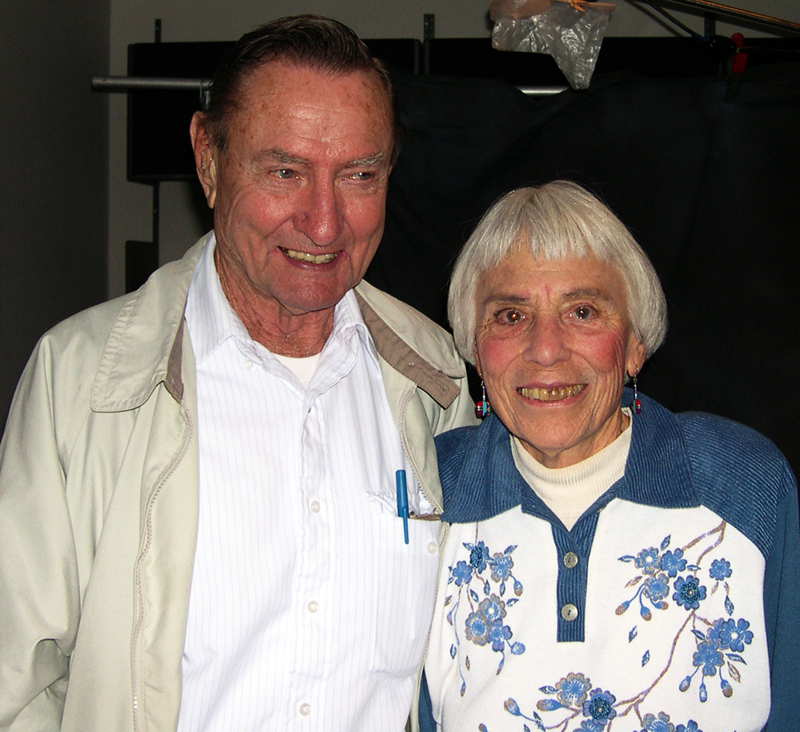 Rebecca Bradford Diven died peacefully in her sleep June 17, 2014. She began her work for the Manhattan Project at Los Alamos in 1944, where she developed a quartz fiber microbalance to weigh extremely small amounts of plutonium.

Diven discusses what it was like for women working at the Manhattan Project and talks about workers’ relations with the Pueblos, most of whom worked as maids or janitors during an interview for the Voices of the Manhattan Project with Cynthia C. Kelly, president of the Atomic Heritage Foundation in Washington, D.C.

I was born in Globa, Arizona, January 6th, 1918. My parents were—my mother was a school teacher, my father was a banker. I went through school in Pasa—we moved to California and I went to schools in Pasadena up through Junior College, and then went first to Berkeley for a year and then to USC for my final year. I graduated with a BS in Science, but it was really—well, sorry, that’s incorrect—a BS in Education, it was physical education as a major and life science as a minor. I never worked in teaching.

I graduated in June of 1941 and immediately went to a summer job that I’d had for three years as a counselor at an expensive girl’s camp at Echo Lake, which is above Tahoe Lake. I went two weeks pre-camp, four weeks of camp, and two weeks of post-camp. I loved it. I was a lifeguard and a crafts teacher. I could play with the kids. It was as near an ideal job as a person at the very end of the Depression could’ve had.

Another counselor and I had agreed that in September, we thought we would go to Mexico together and then be there in time for the February session of the University of Mexico, but I needed another hundred dollars to be secure. And to put it mildly, my father spiraled through the ceiling, refused the money, and I said, “That’s all right, I’ll get a job.”

Well, the job I got was unexpected. It was at California Institute of Technology, in the sub-basement. We were not exactly honest with each other. I didn’t say that I planned to leave in February, and they didn’t tell me I was working on a National Defense Project. So December 7th came along. I went to work, a great big sign on the door: “National Defense Project, No Entrance without Permission.” I was locked in. I couldn’t change. You couldn’t leave work without permission, written permission, to prevent proselytizing during the war. So it wasn’t the time to go to Mexico anyway and I stayed. This job involved quartz fiber work, microfibers, and it was in the sub-basement of the chemistry building working on Linus Pauling invention of a oxygen meter for submarines. I was trained on the job. I had never worked with microfibers. And by close to October of ’43, the oxygen meter had gone into manufacturing to make it on scale for the submarines and I was bored silly. That wasn’t what I wanted so I told my bosses at Caltech that I was going to quit, and told, “You can’t quit. You are locked in.”

And I said, “But I can quit. I have saved my money. I can live at home for the three months I have to be without employment, and then I’m going to join the Navy, the Army, or Red Cross, whoever will take me.”

And they said, “Well let us think about that.” And in a little while I was called in and [they] said, “We have a job. We can’t tell you what it is, where it is, but they want you to come and do quartz fiber work.” Well, that sounded kind of strange and then he said, “Well, after you agree to take the job we’ll tell you where it is and what you will be doing.” And I said, “Well, can you tell me, is it for the war effort?”

“Well, it’s secret. I will only tell you that I don’t approve of it.”

“But it is for the war effort?”

Well I thought about that for a while, and said, “Okay, I’ll take it.”

Read the rest of the Atomic Heritage Foundation’s Voices of the Manhattan Project inverview here.