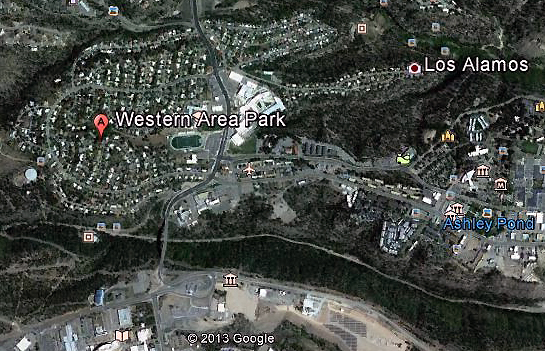 Any discussion of the real estate and the history of our neighborhoods in Los Alamos must begin with the first neighborhood developed in our mountain community – “the Western Area.”

The Western Area derived its name from the location in which it resides. At the time it was being developed, it was thought that Los Alamos would remain on only one mesa.

Therefore it was believed that a distinction between East and West would be all that is necessary. The Western Area consisted of an open meadow and grain fields during the Ranch School days. During Project Y, part of it was converted into a golf course.

In 1946, The Atomic Energy Commission developed it into a suburb in an attempt to retain many of the Laboratory’s wartime staff.

The homes were well built in what came to be known as Cold War Moderne with concrete block and stucco with an attached carport but did not offer many variations.

After having lived in temporary structures hastily built during the war, the first occupants of the area were incredibly grateful to have one of the single-family homes.

The postwar community received national coverage as a model community. While it was the first suburb to be created in New Mexico, residents often described it as a suburb without an “urb.”

One of the early residents of the The Western Area, Jim Bramble, 93, who still resides in his Western Area home on Trinity Drive, has lived in the neighborhood for more than 60 years.

He says it is the best part of Los Alamos to live in. He enjoys being close to downtown and the Los Alamos Medical Center, yet he can walk right up to the Quemazon Trail and take a hike in the forest or just enjoy gardening in his large back yard.

The western area boasts a large park, playground equipment, a soccer field, and tennis courts in the middle of the neighborhood that can only be accessed by sidewalk. There are sidewalks on every interior street that provide access to the park.

While many of the original homes in the Western Area have been updated, added on and modified in different ways since their creation, the Cerro Grande Fire in the summer of 2000 had the largest impact on the area.

Many of the perimeter homes destroyed in the fire. Many larger homes of all different floor plans were built in their place enhancing the neighborhood.

The Western Area remains a very popular area to live in today and home sales in the area show that. In 2012, 26 homes were sold in the Western Area ranging in price from $85,000 for a small half duplex to $535,000 for a large newer single family home.

The average time on the market was significantly lower than many other areas of town. There are currently five homes on the market ranging in price from $162,500 to $280,000.

Perhaps if you are in the market for a new home, New Mexico’s first suburb without the “urb” is the place for you.

Editor’s note: James Chrobocinski is the Owner/Broker of Zia Realty Group. He can be reached at (505) 662-8899 or ziarealtygroup.com/