During a RCLC meeting Friday in Taos, Neptune’s Paul Black (together with Paul Black) discusses a stakeholder engagement and community outreach program the company is launching soon. Courtesy photo 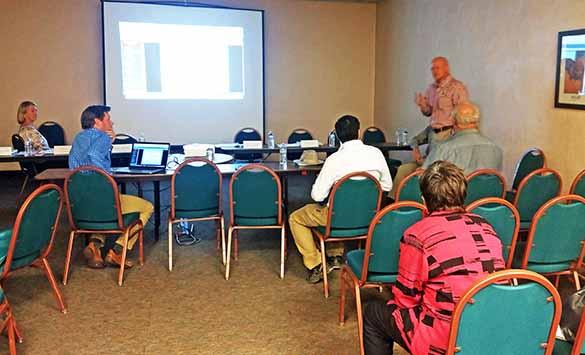 The Regional Coalition of LANL Communities (RCLC) met Friday in Taos where they heard from an auditor contracted to complete six years of back audits in order to bring the organization into compliance following past mismanagement issues.

RCLC board members, staff and representatives from Los Alamos County, which serves as the RCLC fiscal agent, discussed preliminary results of six years of audits via an exit conference with the contracting auditor.

Vasquez emphasized the value of an independent third-party audit of all the RCLC’s dealings, as well as a sign off from the Office of the State Auditor, stating, “We can now be assured of making the public whole from past fiscal mismanagement and mistakes”.

Vasquez also briefed the board on efforts to contract with outside, independent legal counsel. In 2018, the previous management team had failed to comply with state regulations regarding the spending of public dollars resulting in a special audit, which reported 18 findings against the RCLC.

At a previous RCLC meeting in June, Vasquez reported that the organization was now fully compliant with 15 of the 18 findings and with completion of the audits should be fully compliant.

The group also heard from environmental contractor Neptune about a stakeholder engagement and community outreach program they are launching, designed to engage the various communities in northern New Mexico to identify what the public’s shared values and goals for clean-up at Los Alamos and the surrounding sites would look like.

The presentation was made by Neptune’s Paul Black and Tom Stockton. Doug Hintze, manager at the DOE-EM Field Office in Los Alamos, attended the meeting and introduced Black and Stockton.

Finally, the RCLC board heard a finance presentation from their newly hired independent accounting firm Zlotnick Law & Sandoval PC. Rick Sandoval spoke to the board and gave them detailed financial reports for June and July and highlighted what information the RCLC board can expect to hear from the firm going forward.

The new RCLC management team contracted with firm Zlotnick Law & Sandoval PC as part of their efforts to bring the organization into full compliance with state regulations and to provide more transparency and accountability. 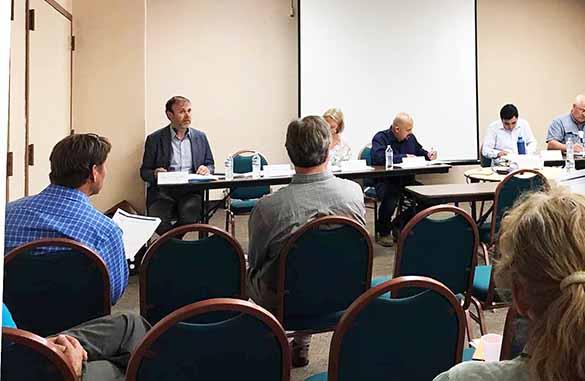 RCLC Executive Director Eric Vasquez, left, and members of the board at the RCLC meeting Friday in Taos. Courtesy photo