Ravens Among Smartest Of All Birds 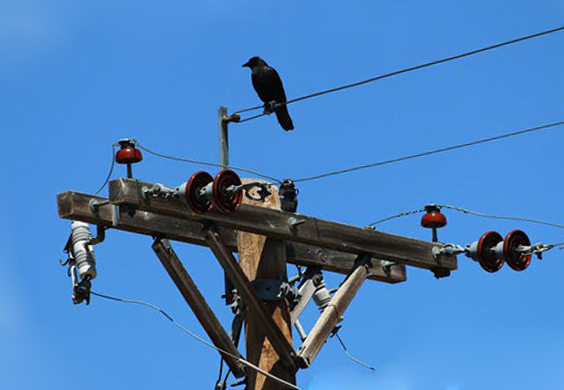 Perched high on a utility pole, this Common Raven has a bird’s eye view of homes on Zuni Street in Los Alamos. Photo by Cory Lueninghoener

The intriguing Common Raven has accompanied people around the Northern Hemisphere for centuries, following their wagons, sleds, sleighs and hunting parties in hopes of a quick meal.

Ravens are among the smartest of all birds, gaining a reputation for solving ever more complicated problems invented by ever more creative scientists.

Not just large but massive, with a thick neck, shaggy throat feathers, and a Bowie knife of a beak. In flight, ravens have long, wedge-shaped tails. They’re more slender than crows, with longer, narrower wings, and longer, thinner “fingers” at the wingtips.

Common Ravens aren’t as social as crows; they tend to go it alone or in pairs except at food sources like landfills. Ravens are confident, inquisitive birds that strut around or occasionally bound forward with light, two-footed hops. In flight they are buoyant and graceful, interspersing soaring, gliding, and slow flaps.

Common Ravens live in open and forest habitats across western and northern North America. This includes deciduous and evergreen forests up to treeline, as well as high desert, sea coast, sagebrush, tundra, and grasslands. They do well around people, particularly rural settlements but also some towns and cities.