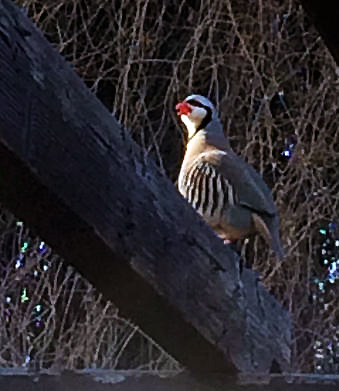 This rare sighting of a chukar was captured on camera Monday morning on Bathtub Row in Los Alamos. Photo by Jim O’Donnell
Staff Report
The chukar partridge or chukar (Alectoris chukar), a Eurasian upland gamebird in the pheasant family Phasianidae, was sighted Monday on Bathtub Row in downtown Los Alamos. Reports also have surfaced that the rare sighting of this bird has occurred in recent days around Oppenheimer Place.
The chukar has been considered to form a superspecies complex along with the rock partridge, Philby’s partridge and Przevalski’s partridge and treated in the past as conspecific particularly with the first.
The chukar partridge has well marked black and white bars on the flanks and a black band running from the forehead across the eye and running down the head to form a necklace that encloses a white throat. The species has been introduced into many other places and feral populations have established themselves in parts of North America and New Zealand. This bird can be found in parts of Middle East.

This partridge has its native range in Asia, including Israel, Lebanon, Turkey, Iran, Afghanistan, Pakistan and India, along the inner ranges of the Western Himalayas to Nepal. Further west in southeastern Europe it is replaced by the red-legged partridge, Alectoris rufa. It barely ranges into Africa on the Sinai Peninsula. The habitat in the native range is rocky open hillsides with grass or scattered scrub or cultivation.

It has been introduced widely as a game bird, and feral populations have become established in the United States Rocky Mountains, Great Basin, high desert areas of California, Canada, Chile, Argentina, New Zealand and Hawaii. Initial introductions into the US were from the nominate populations collected from Afghanistan and Nepal.

It has also been introduced to New South Wales in Australia but breeding populations have not persisted and are probably extinct. A small population exists on Robben Island in South Africa since it was introduced there in 1964.