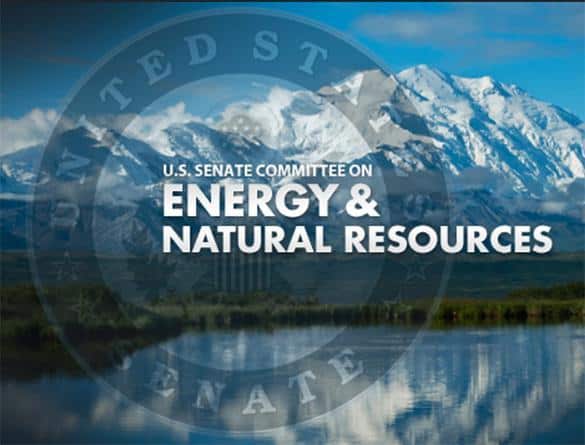 U.S. SENATE News:
WASHINGTON, D.C. ― U.S. Sen. Martin Heinrich (D-N.M.), the Ranking Member of the Subcommittee on Energy, delivered opening remarks during a hearing Tuesday on a number of important issues, including energy efficiency, energy storage, artificial intelligence, and carbon capture.
Heinrich called for increased research, development, and deployment of long-term energy storage capabilities and to strengthen the U.S. Department of Energy’s role in utilizing artificial intelligence and supercomputing applications for grid modernization and veteran’s health care.
Heinrich has been a champion for building a more secure and robust 21st century energy infrastructure, which is critical to realizing the nation’s true clean energy potential and creating jobs. A key component of that is integrating energy storage into the nation’s grid. Energy storage complements intermittent renewable resources–such as wind and solar–to increase full-time availability, provide backup power in case of emergencies, and help reduce the need for high-cost power during periods of peak demand.
Heinrich introduced the bipartisan Energy Storage Tax Incentive and Deployment Act of 2019 to establish an investment tax credit for business and home use of energy storage. Currently, there are no direct tax incentives available for energy storage. He is also a cosponsor of the Better Energy Storage Technology (BEST) Act to support grid-scale storage research and development, and the Promoting Grid Storage Act that lays out the foundation for the systematic deployment of energy storage technologies.
Testimony and the archived webcast of hearing available here.
Senator Heinrich’s opening remarks as prepared for delivery:
I’d like to thank Chairman Cassidy for calling this hearing today – our first hearing together as Chairman and Ranking Member of the Energy Subcommittee.
I’d also like to welcome our two witnesses from the DOE.
The Energy and Natural Resources Committee hit the ground running this Congress with a good bipartisan public lands package.
I was pleased to see that legislation get to the President’s desk in March, but it left a good number of energy bills behind.
Today we begin consideration of important energy legislation with eleven bills, almost all of which are bipartisan.
The list of bills on today’s agenda could have been twice as long, so I hope the Subcommittee will continue to process legislation with additional hearings and a markup in the full committee.
We should be able to assemble fairly quickly one or more packages of energy legislation that can be marked up in the committee with bipartisan support.
I look forward to working with the Chairman, Ranking Member Manchin, and our colleagues on the full Committee to pass important energy legislation.
Today’s hearing will address several important energy issues, including energy efficiency, energy storage, artificial intelligence and carbon capture.
Energy technologies are one of the critical tools we need to address climate change – and what many of us believe has become a climate crisis.
We need to get additional low-carbon energy technologies ready for commercialization, and then we need to get them deployed.
Energy storage is clearly a major topic of interest for members judging by the five bills before us today. I am pleased to cosponsor of several of the bills.
Expanded use of energy storage, especially long-term storage, is the key to modernizing the grid and the near-term transition to clean energy economy.
There is widespread support in Congress for a robust R&D program on energy storage, including long-term storage, and I look forward to working with my colleagues to move legislation forward.
Although I think the president’s FY2020 overall request for energy R&D is totally inadequate, the Administration has acknowledged energy storage as an important area for investment and I want to hear more about the Department of Energy’s plans.
Again, I thank the chairman for calling today’s hearing.
I look forward to hearing from our witnesses and working with you to pass strong energy legislation.
I have a number of letters of support for the bills on today’s agenda and I asked that they be included in the record.
Menu
Los Alamos
88°
Fair
5:49am8:24pm MDT
Feels like: 88°F
Wind: 10mph NNW
Humidity: 10%
Pressure: 30.09"Hg
UV index: 8
MonTueWed
84/57°F
90/66°F
86/64°F
Weather forecast Los Alamos, New Mexico ▸