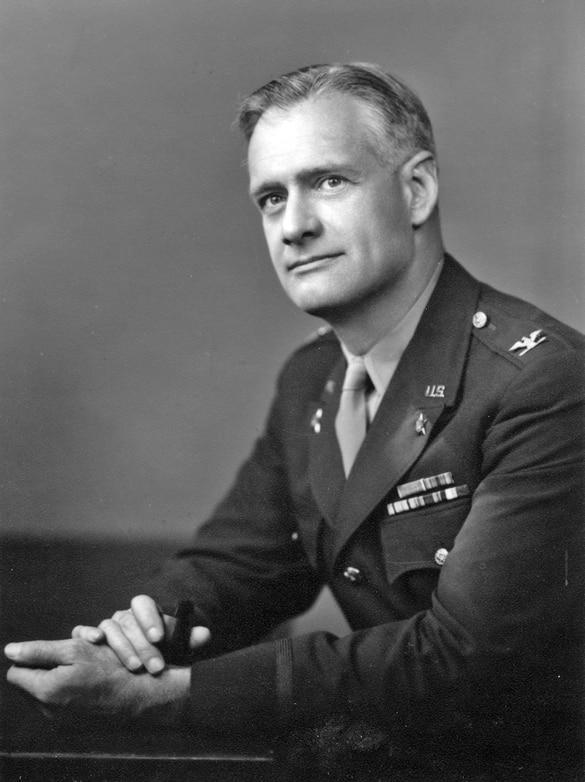 In the long, varied history of Los Alamos, we often hear of unsung heroes, those whose names have mostly been left out of history books but whose influence and impact are lasting. One of our unsung heroes is Lawrence Sill Hitchcock, known as Hitch, the headmaster of the Los Alamos Ranch School (LARS) from 1927-1942.

Last week, in a small private ceremony, Hitch’s daughter, Jodi Hitchcock Benson, “brought father home.” A gathering, near trails built during the Ranch School days, memorialized Hitch for his profound and remarkable influence on generations of boys and on the nation.

Born in 1898 to a Presbyterian minister and his wife, Hitch lived his early life in New England and was the fourth generation in his family to attend Yale.

Fayette Curtis, then the only teacher at LARS and in desperate need of help, recruited Hitch in 1919. Hitch considered it “a call to adventure, a chance to spend a year in the west.”

After two days on a train, Hitchcock disembarked at Buckman, where Curtis met him with a horse and the two rode together the 10 miles to the school. That year, they taught a total of 20 boys.

While he complained to his mother about having to pump “knowledge into unwilling craniums,” he also appreciated the freedom he had in teaching at LARS. “The variety of subjects I teach, the possibility of getting my results in my own way and being answerable for only results and not for methods, and of course, the outdoor life, all appeal to me very strongly, and the pay appears to be as good as I would be likely to get anywhere,” he wrote.

When Curtis died rather suddenly in 1926, Hitch became the school’s headmaster. He spoke multiple languages—his master’s thesis was on the Latin verb quo—and he always felt the Spanish he learned in northern New Mexico didn’t measure up.

Ranch School historians John Wirth and Linda Aldrich described Hitch as introspective, scholarly, and serious, an assessment with which his daughter agrees.

Hitch’s time at the Ranch School came to an abrupt end when, as an army reservist, he was called up in January 1942 to serve in World War II. As Colonel Hitchcock he worked for the Office of Strategic Services, forerunner of the CIA. After the war, he was a CIA administrator and supervised the construction of the agency’s headquarters in Langley, Va.

From 1942-1947 he served as Secretary General of the Inter-American Defense Board where, his daughter says, his responsibility was to help keep Central and South American countries from “going communist.”

Hitch married late in life at age 48 and had a son and a daughter, who also attended Yale.  In 1981, he wrote for his children an autobiography, which remains unpublished.

Benson recalls that even though two large, western saddles from Hitch’s days at the Ranch School were always in their Maryland home, the Hitchcock family was the only one in their neighborhood that didn’t have horses.

She speculates that Hitch longed for his days in Los Alamos and just couldn’t bring himself to ride again.

At a LARS reunion in 1970, the students presented a Latin salutation for Hitch that read, in part, “Master Lawrence Hitchcock, finest of men and most learned, your students wish to do you the greatest honor…Fortune favors youth under your instruction…To you for such services, we give you greatest thanks.”

Later this month, to commemorate the 100th anniversary of Troop 22 in Los Alamos and in cooperation with Los Alamos County Open Space, Scouts from the troop will place a memorial marker at the end of Graduation Point, the site where Ranch School graduations were held before Fuller Lodge was built.

The memory of Hitch will be forever tied to mountains, valleys, mesas and canyons where he dedicated his life to serving and teaching others. 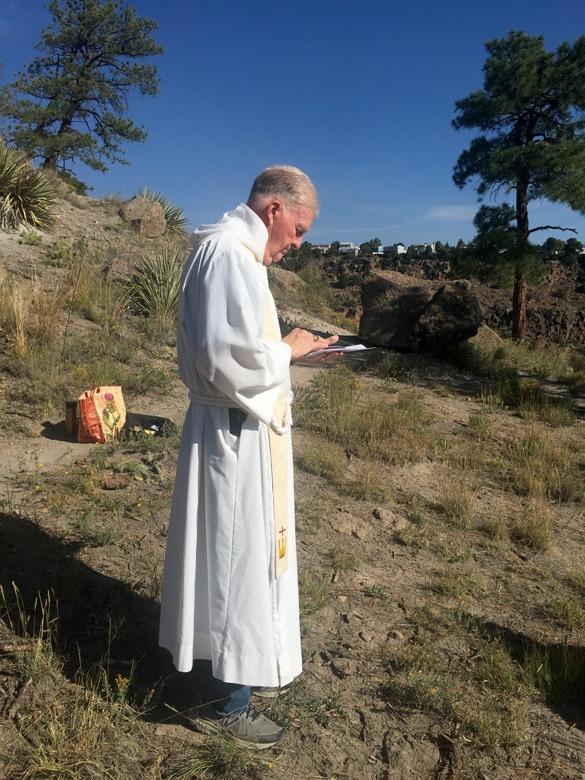 Father Colin Kelly, retired priest from Trinity on the Hill, presides over a memorial ceremony for Lawrence Hitchcock, long-time headmaster of the Los Alamos Ranch School. Photo by Heather McClenahan