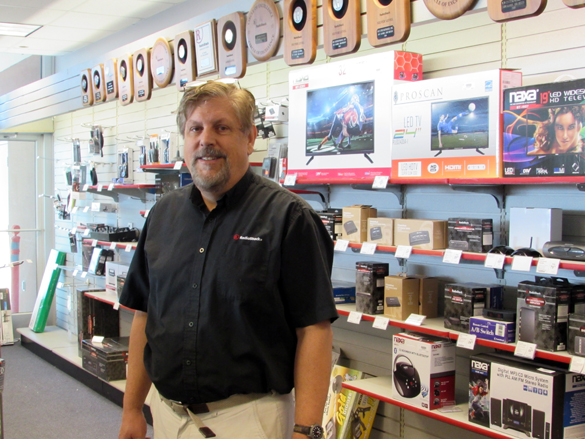 Los Alamos Radio Shack Owner Bill Cabral assures the community that although the coporation may be in trouble, his store is not. Photo by Kirsten Laskey/ladailypost.com

“We’re a franchise and we’re independently, locally owned and they couldn’t close us even if they wanted to,” Cabral said.

Being independently owned means Cabral purchases inventory from Radio Shack and sells merchandise using their name but the corporation hasn’t provided much inventory over the years, Cabral said. As a result, he said, “We’ve been working on getting inventory from other sources  and we now have better inventory than we’ve had in years.”

“We now have back in stock a range of TVs,” Cabral added.

Another popular addition to the store is science project items including telescopes, prisms, radiometers, magnets  and crystal growing kits. “We got toys; we got the best toys in town,” Cabral said.

Cabral also takes pride in his business’ pricing. “Because we’ve been independent, we can set our own prices. We gotten very aggressive pricing as we gotten items back. We beat our local competition on most pricing these days and on some things we beat them by a lot.”

His business offers good customer service, too, he said.

“One thing is the way retail has been going the last few years is you can’t go into a store and get help with anything and technology is difficult enough,” Cabral said. “There’s so many nuances to the products that I’ve gotten great satisfaction over the years with matching the right products with the right needs to help the customers.”

“It’s only getting worse,” he added, “with all the different cables and adapters these days you have to be a rocket scientist to figure out what you’re doing and I can help. It’s not at all easy to go on the Internet and figure it out. A lot of people order the wrong part and come to me and say, ‘Where did I go wrong?’”

As Cabral assists his customers, he is learning as well. “The customers come in and challenge me. They always ask new things I never hear before,” he said.

While the store’s doors are not going to permanently close, Cabral said it could get another name. “We may not be here as a Radio Shack but we will be here as an electronic business with the same mix of products.”

Cabral has owned the store since 2001. Before that, it was owned by Dan and Lynne Steele. “The Radio Shack of Los Alamos has been here forever,” Cabral said. And that will continue. “We’ll here even if Radio Shack goes away,” he said.