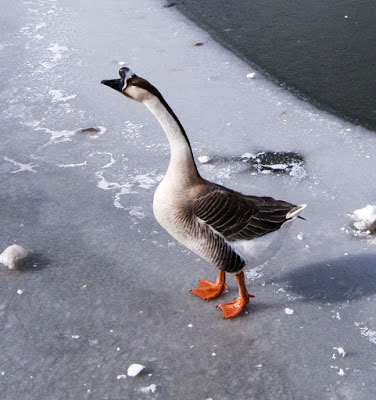 It’s a sad day today as my good pal “Brownie the Goose” was seen early this morning being carried away by a big coyote.

My wife and I walk past Ashley Pond nearly every day and I never failed to greet Brownie and Homer with a squawk and a bow.

Brownie was a pretty aggressive goose and was often seen terrorizing kids. That was his nature. I was once told that if you bow at a goose, they consider it a sign of respect. I tried it and it worked. He stopped chasing me and we became good pals. 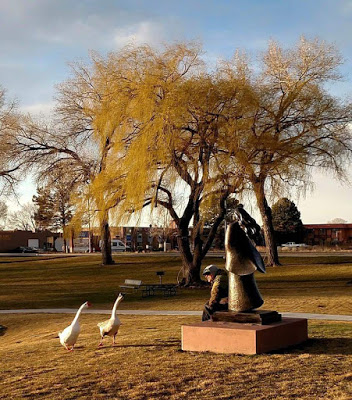 Homer, Brownie and Greg up on the grass at Ashley Pond. Not a very safe place for geese to be, it turns out. Photo by Karen Kendall

Brownie’s companion goose at Ashley Pond was Homer. They were inseparable. Each day as Karen and I approached the pond, they would spot us from a distance and start squawking up a storm. It was nice to have such an excited greeting.

I felt like Norm on Cheers, where every goose knows your name!

I noticed this year that Brownie and Homer were spending a lot more time up on the grass near the waterfall. It didn’t seem like a smart thing for them to do with all the coyotes that roam around downtown.

I would usually try to herd them back down to the pond when I saw them up there. I guess a coyote got lucky and caught Brownie unaware up on the grass. Brownie was getting older and his legs would shake as he stood on dry land. Maybe he was just not quick enough this morning to get back to the safety of the pond. 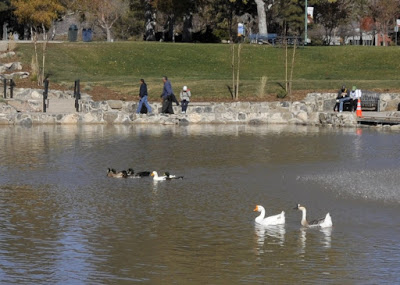 Homer and Brownie in happier days. Photo by Greg Kendall

I’m really going to miss Brownie and I’m certain Homer will be very sad, too. It just won’t be the same without Brownie.

Thanks to Carl Maxx for keeping the ducks and geese happy and fed on a nearly daily basis through good and bad weather.

And thanks to Sallye Sibbett for all her work running Duck Buddies for many years and feeding them often.

Carl and Sallye are two of the unsung heroes of Los Alamos.