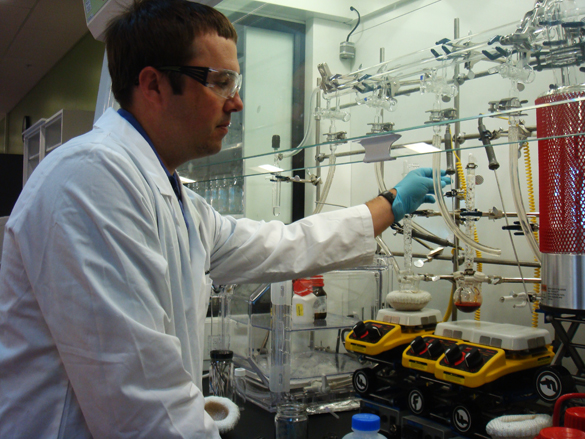 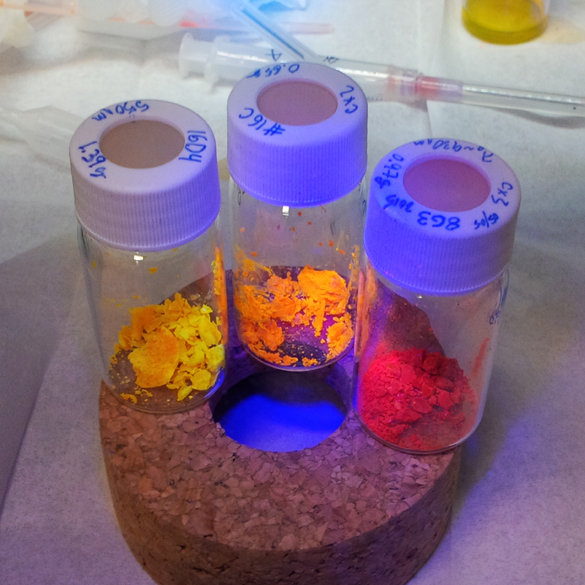 Quantum dots can take any light and turn it into any color. Courtesy photo
By ROGER SNODGRASS
Los Alamos Daily Post

If it were possible to win a trifecta in the high-stakes/high-gain world of start-up technology, a two-year-old Los Alamos company with a geeky name might have just pulled one off.

Hunter McDaniel, president and founder of a local venture called UbiQD, LLC, announced Monday that his company had signed two key intellectual property licensing agreements, one with Massachusetts Institute of Technology and the other with Los Alamos National Security, the partnership that manages Los Alamos National Laboratory.

The licenses have been in the works for more than a year,

Last week UbiQD was one of four local businesses selected for the Venture Acceleration Fund (VAF) awards, administered by the Regional Development Corporation (RDC). For extra measure, McDaniel added, “We’ve just closed another $110,000 in angel financing, which included a new board member. Also, we have extended our lease agreement with the New Mexico Consortium until late 2017.”

McDaniel sees an upward swing for the company.

“Together they represent the foundational state of the business, which is quite strong,” he said. “We have these intellectual property licenses to a technology that is potentially very disruptive to a number of industries, and we have the capital and local support to actually execute on that opportunity.”

The new licenses and UbiQD’s focus have to do with quantum dots – the “QD” in the company’s name. The “Ubi” syllable means everywhere, the dream of every new tech company that hopes to dominate its market. “UbiQD” rhymes with “ubiquity.”

“Quantum dots are not new in themselves,” said McDaniel, noting a recent conference in Santa Fe celebrating 20 years of work on the technology, also known as “nanocrystals” at Los Alamos.They are “really tiny pieces of material that are 10,000 times smaller than a human hair, vanishingly small,” McDaniel said. Because of quantum properties of physics at that scale, the color they emit depends on their size. “They can take any light and turn it into any color, or sunlight and turn it into energy.”

Victor Klimov, director of the Center for Advanced Photophysics and founder of the quantum dot program at Los Alamos, has described the quantum dot as a kind of virtual tool. “Because of their size-controlled electronic properties and chemical flexibility, quantum dots can be viewed as ‘artificial atoms’ that can be engineered on demand to address a specific physical problem or a need of a certain application.”

McDaniel, who worked with Klimov and was a coauthor on some of the team’s papers, said quantum dots were already a hot subject in the electronics industry.

“Quantum dots are not new in themselves,” he said, “but they are going into new products – mobile tablets, Amazon Fire, television screens by big Chinese manufacturers; Apple is filing patents. There’s a lot of money to be made.”

The problem with much of the work thus far has been to reduce the toxic properties needed to make the dots. A lot of the dots were made with toxic alloys and some of the early solutions to that problem were too expensive. But an MIT material and a Los Alamos process for making it, now under license to UbiQD, McDaniel claims, will give their product a significant market advantage.

UbiQD’s license with MIT is exclusive and the license with Los Alamos is non-exclusive. Both require royalty payments based on sales. McDaniel said the non-exclusive with LANL was a condition required by the lab’s lawyers, to negate any potential conflict of interest because McDaniel is a former employee.

McDaniel said his basic plan for the next phase is to explore a number of industrial partnerships with larger companies for use in their products, like luminescent paint and solid state lighting. “You can put quantum dots into a composite material like paint, and then make that glow,” for things like traffic signs at night and things that need to grab attention.

As a generic example, McDaniel talked about a bike reflector. “We’re not going make the bike reflectors,” he said. “The manufacturer already does that, but they can make them with quantum dots if we show them how.”

McDaniel said the marketing outlook is hypothetical because there are actual markets and markets that don’t exist yet. But not counting the hypothetical, a $160 million actual market in 2014 is projected to grow a cumulative 91 percent a year and reach more than $3 billion a year in 2018. That’s according to BCCC research

“I don’t want to sound hyperbolic, but I think we’re on the threshold of a major shift in the way that quantum dots are being applied and deployed to supply consumer products,” McDaniel said. What he proposes is a safer product at a lower cost.