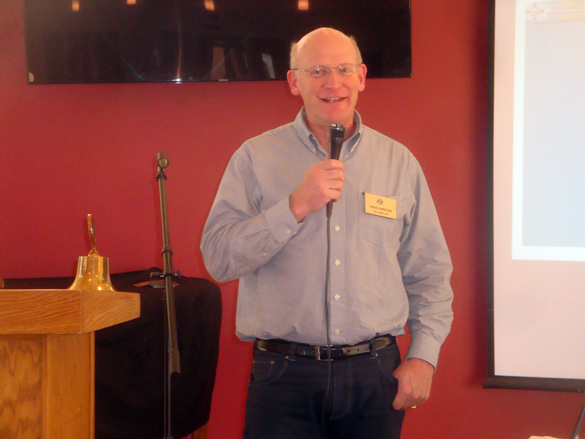 Puzzled by all the discussion and promotion about an upcoming Los Alamos County bond election on potential recreation projects? Signs are popping all over the County again. Los Alamos County Public Works Director Philo Shelton—who is also Second Vice President of the Kiwanis Club of Los Alamos—gave the club a briefing early this year on an election that the County Council is planning in May. He provided Kiwanians with a one-page handout that listed five proposed projects, the probable cost of each, and the annual operations and maintenance budget projections for each.

The election will be a yes-no, mail-in vote on the five projects. Voters won’t have the option of breaking out individual projects and voting on them separately. The ballots go out May 2, and must be mailed or returned in person by May 23 to the County Clerk’s Office.

If the voters approve the plan, the County will issue a $20 million general obligation bond, which will require a property tax increase of 2.2 mils. To illustrate the potential impact of this increase: this tax increase would cost a homeowner an additional $220 per year on a home with a value of $300,000 (which is a taxable value of $100,000).

Existing and anticipated capital improvement funding of $13.4 million would be used “to leverage the $20 million bond to fully fund these recreation projects,” which have a grand total probable construction cost of $33,400,000, the handout said. The total annual operations and maintenance budget associated with the projects is $1,595,000.

Improvements to the existing varsity softball field at Overlook Park. Among the improvements would be construction of a concession stand, and installation of restrooms, lights, and fencing. The probable construction cost (as estimated—in this case and the other five—”based on high-level concepts for potential projects along with a range of assumptions about site, building type, and finishes”) would be $1,042,000. The estimated cost of annual operations and maintenance would be $61,000.

Improvements to the existing Golf Course. The plan is to upgrade the irrigation system, and improve the greens, fairways, tee boxes, and bunkers. (Shelton noted that this project would include no further improvements to the relatively new Golf Course building that houses shops and a restaurant.) He noted that about 40% of the water delivered by the aging irrigation system now in place is being lost. The estimated new-project construction cost is $4,524,000, but there would be no increase in the current annual operations and maintenance budget.

Construction of a Multi-Generational Pool, with water depths ranging from near zero to about four feet. It would be “co-located with the existing pool at the Aquatic Center.” The probable construction cost would be $8,684,000, and the annual operations and maintenance would run about $426,000. Shelton said that the facility wouldn’t just be for little children. It would be available to serve all people learning to swim and senior citizens taking aerobics classes, for example.

Construction of a Recreation Center and Ice Arena. The handout said that this “indoor facility (would) accommodate a range of activities from soccer to basketball to track.” In addition, the “co-located” Ice Arena would “provide more reliable ice conditions and serve as a multi-purpose indoor facility during the summer.” (The old, outdoor ice rink in Los Alamos Canyon would continue to exist., Shelton said, catering to those who appreciate it as “the southernmost outdoor ice rink in the country.”) The new center and arena would be located on DP Road. The projected cost of the center and arena is $18,430,000, and the cost of annual operations and maintenance is estimated at $1,071,000.

Splash Pad. This concrete pad with water available for “rain” and “play” would be located in Piñon Park in White Rock. Adjoining “shade structures” and “a picnic area” would also be provided. Construction cost: $720,000. Annual operation and maintenance cost: $37,000. Shelton and one or two people in his audience commented that splash pads constructed in other communities to help people “escape the heat” have proved to be very popular.

Jane Roberson, for example, asked about the impact that this election might have on people with fixed incomes. Shelton said, “That’s going to be one of the (major) questions.” He said the plan amounts to an $18.33-per-month investment in recreational facilities that could make it “more desirable to live here,” and, therefore “raise the value of your home.”

Roger Stutz questioned the geographic distribution of the proposed projects, noting that far more of the money would be spent in Los Alamos than in White Rock. He asked why the multi-generational pool couldn’t be built in White Rock. Shelton said locating the new pool near the existing pool in the Aquatic Center in Los Alamos would save money on the cost of lifeguards, lights, and other essentials.

Lana Schulte noted that property tax rates in many other New Mexico communities are much higher than those in Los Alamos. Shelton agreed and said he believed that the rate in Los Alamos would still be lower than the rate in Santa Fe County if the county recreation proposals passed.