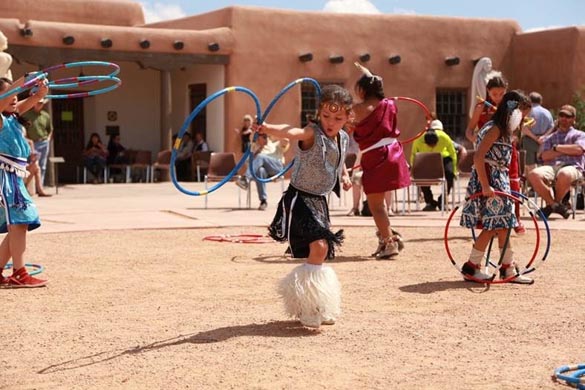 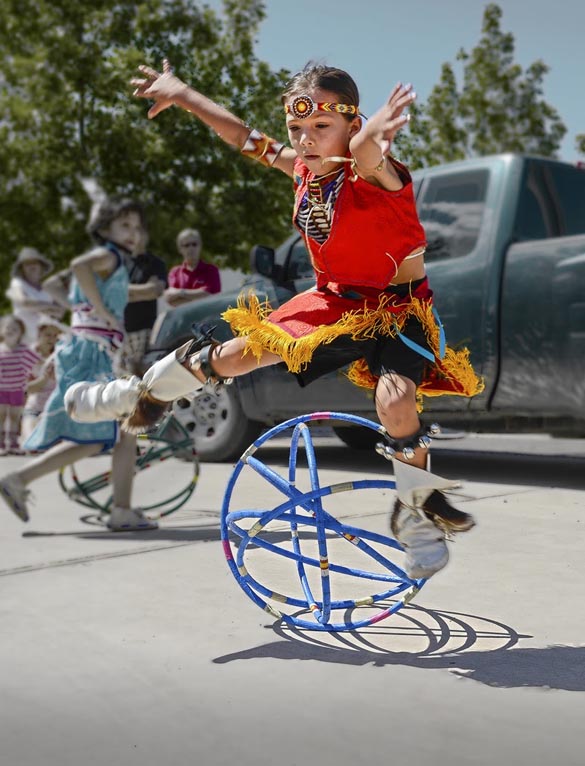 Valentino Tzigiwhaeno Rivera jumping over his hoop world. Photo by George Rivera
MIAC News:
SANTA FE ― The Museum of Indian Arts & Culture invites the public to a commemorative sculpture unveiling and celebration of life – honoring the late Valentino Tzigiwhaeno Rivera of Pojoaque Pueblo, 2008 – 2016.
The unveiling and celebration is 1-4 p.m. Sunday, Nov. 5 at the Museum of Indian Arts & Culture at 710 Camino Lejo, featuring speakers George Rivera (Pojoaque Pueblo), Olympian Gold Medalist Billy Mills (Oglala Lakota), Steve LaRance (Hopi/Assiniboine), as well as performances by the Pueblo Buffalo Dancers, Santa Fe Break Dancers, Jir Project, and Lightning Boy Hoop Dancers.
“We are honored to have this sculpture – depicting Valentino in his Hoop Dance Regalia – created by his father George Rivera, the renowned sculptor, in the Museum’s permanent collection,” says Della Warrior (Otoe Missouria), director of the museum.
“The Museum of Indian Arts & Culture is truly grateful for this outstanding gift celebrating the life of Valentino and his love and joy of dancing,” Warrior said.
Valentino was inspired by world champion hoop dancer Nakotah LaRance (Assiniboine/Hopi/Tewa), and had an affinity for the late Michael Jackson’s dance and performance abilities. His relationship with LaRance – and his father Steve – led to the founding of the Pueblo of Pojoaque Youth Hoop Dance Group.
“Valentino immediately started sharing Nakotah and Steve’s instruction, showing gratitude and blessings for the well-being of others any time he was able,” says his mother Felicia Rivera, “at family parties, at school, in the parks, for relatives when they were sick or well.”
He performed at Pearl Harbor at the Homecoming of the USS Santa Fe, in San Diego with fellow dancers from around New Mexico for the National Indian Gaming Association, and in Phoenix at the World Hoop Dance Competition. In 2014 they traveled to Europe and performed in Paris, Florence, and Geneva, where they danced at the US Embassy for Keith Harper, US Ambassador to the UN Human Rights Council, and Ambassadors for many other countries. “Valentino left a lasting impression everywhere he danced,” says Felicia Rivera. “While many [people] are advised to ‘dance like no one is watching’…Valentino danced like the whole universe was watching…”
A world performer, Valentino danced at the Museum of Indian Arts & Culture, too, in the former Ann and Alan Rolley Performance Circle, now being sponsored by Ashlyn and Dan Perry in Valentino’s honor.
“This sculpture of Valentino performing the ‘Hoop Dance’ will greatly enhance the beauty of Milner Plaza and Museum Hill. We commend Dan and Ashlyn Perry for their leadership role in making this gift possible, with the support of the Museum of New Mexico Foundation.”
For more information, visit the museum’s website at indianartsandculture.org or call 505.476.1271.
Editor’s note: Valentino Tzigiwhaeno Rivera and his sister Paloma were going home with their babysitter for a sleepover March 21, 2015, when the vehicle they were in was T-boned while stopped at a red light. He eventually died from injuries sustained in the collision.
Menu
LOS ALAMOS