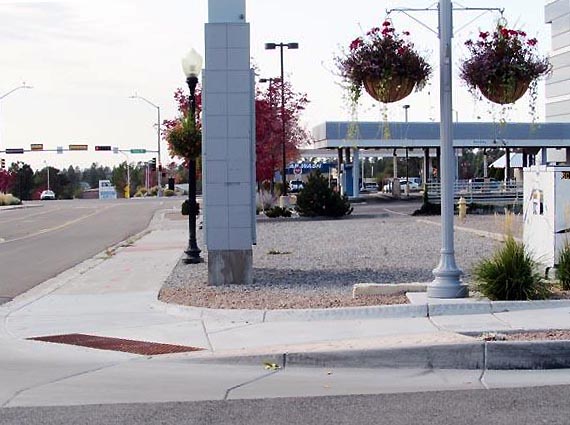 In March, Wilson & Company, an engineering firm from Albuquerque, was hired by the County to assemble the plan. A first draft of the plan was presented to the Transportation Board during its Oct. 5 meeting, but the public has more opportunities to provide feedback.

The plan can be accessed on the County website at https://www.losalamosnm.us/cms/One.aspx?portalId=6435810&pageId=6503682 and input may be provided either by emailing the Public Works Department at lacpw@lacnm.us or calling 505.662.8150. A second draft will be presented to the Transportation Board at its Nov. 2 meeting.

Work on the transition plan began upon being notified by the New Mexico Department of Transportation (NMDOT), working on behalf of the Federal Highway Administration, as an effort to ensure compliance with federal ADA statutes. Martinez said NMDOT is requiring all local agencies comply with federal statute on ADA transition plans as a condition of receiving federal transportation funding.

This is a statewide effort by NMDOT that affects all municipalities. NMDOT also must meet the same requirement by drafting their own transition plan for state facilities. State highways under NMDOT jurisdiction like N.M. 502 (Trinity Drive) and N.M. 4 in Los Alamos must be included in NMDOT’s transition plan.

“Identification of physical barriers for all County owned facilities is a large effort, so our initial focus as recommended by NMDOT has been on the street right of way which includes features like sidewalks and curb ramps,” Martinez said. “In this case, the community is our biggest resource with helping us identify needs to improve accessibility for the disabled, so we encourage folks to contact us.”

The County does not have to start from scratch on this, Martinez said. He pointed out many County facilities are new and built to current codes including ADA. Martinez added new sidewalks and curb ramps are built to comply with ADA despite some challenging terrain in areas. In such cases, ADA allows achieving compliance to the maximum extent feasible.

“We plan projects on a yearly basis, and when we implement those projects, current ADA design and construction standards are utilized for both facilities and streets,” Martinez said. “We do a great job with addressing ADA needs in maintenance and new construction projects, but understand there’s still work to be done.”

Some members of the public weighed in during the Transportation Board meeting. Wendy Swanson, a member of the advocacy group, LA Walks, said although she found some inconsistencies in the way the data appears in the plan, she was generally pleased with the plan.

“Overall the plan sounds good to me,” Swanson said.

Doris Roberts, owner of All Individuals First, wondered about funding.

“I’ve been part of the ADA policy since 1973 … I have deaf parents, I’ve taught deaf special needs students for 27 years, I have my business … so  I am very familiar with ADA. I’m also familiar with people saying we’re adopting this and we do all this work but there’s no funding that goes with it,” she said.

Roberts added that while Public Works has been great to work with, she has a client who is in an electric wheelchair and must help her get from one sidewalk to another, at times by getting into the street to assist her. Ultimately, Roberts asked what the transition plan will ultimately bring.

“Where is this leading, I guess is my major question,” Roberts said.

Martinez said the intent of this document is that it is not static and sets a path toward implementation of improvements, which can occur over time. It should be reviewed and updated as needed, Martinez said.

“The community is the department’s eyes and ears. If there are things that need to be brought to Public Work’s attention, then the department would like folks to make us aware of it,” he said.

Many times an ADA concern, like a request for an audible indication at a signalized crossing could be addressed in relatively short order by the County’s field crews while larger issues may take time to program. Public Works also is engaged with the NMDOT on larger pedestrian improvements like the N.M. 502 Reconstruction Project and have submitted grant requests to improve Trinity Drive between 15th Street and Oppenheimer.

Martinez said the plan needs to be finalized and submitted to NMDOT by Dec. 22 for its review.