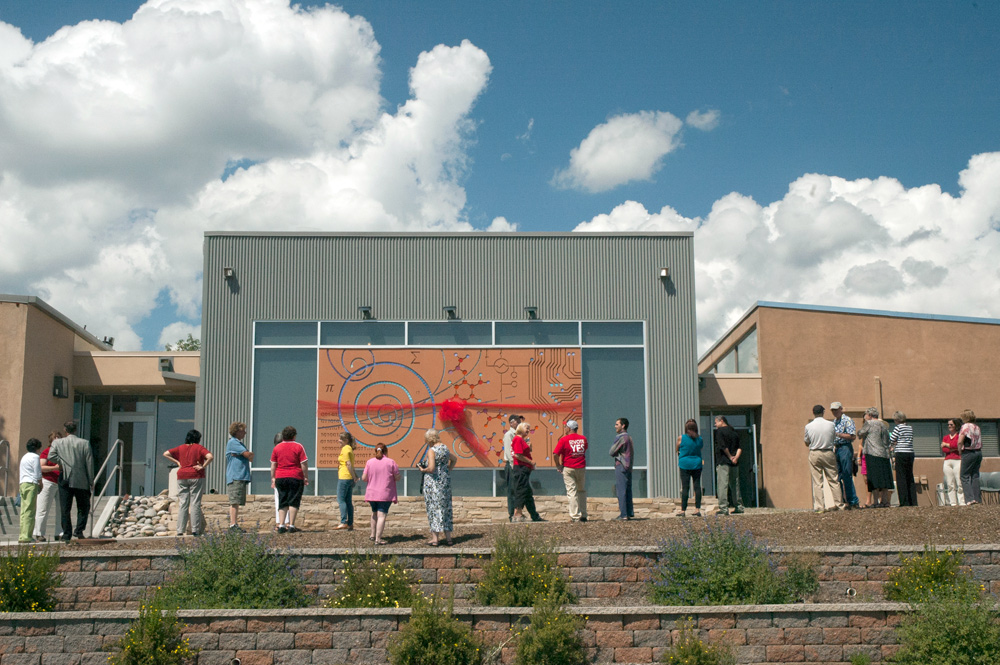 UNM-LA faculty, staff and community members gather before the ribbon cutting ceremony for ‘The Power of Code,’ the new public art project on the UNM-LA campus. Photo by Vint Miller 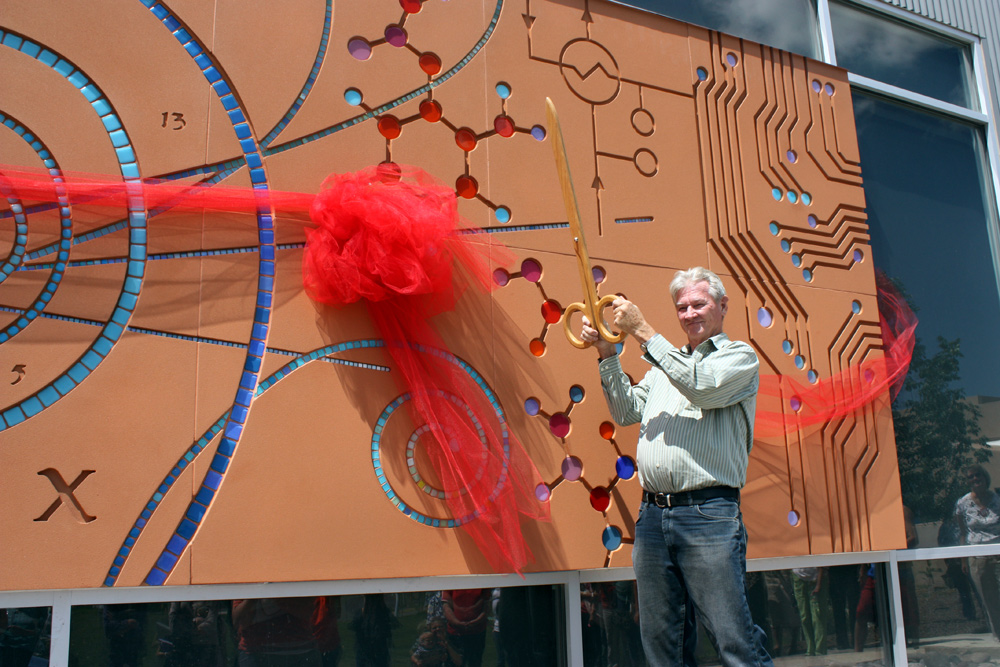 It’s been nearly eight years in the making, but The University of New Mexico-Los Alamos (UNM-LA) finally dedicated the new public art piece, The Power of Code, Tuesday at a gathering of students, staff and community members on the UNM-LA campus.

The 18-foot by eight foot, bas-relief, mural is installed on the exterior of Building Five, overlooking Mesa Field and is visible from Diamond Drive.

The New Mexico Department of Cultural Affairs and New Mexico Art in Public Places provided additional funding for the commissioned work. No UNM-LA operational funds were used for the art. Additionally, the UNM-LA Student Government contributed $7,000 for the hardscape. Total cost of the project was $57,000.

The Power of Code is the work of Santa Fe artist Nicholas Gadbois and was installed by the artist over the summer. He spent more than a year in the planning and fabrication stages.

Constructed of 10 glass fiber reinforced concrete panels, which have routed channels depicting a dominant spiral, circuitry, mathematical symbols, molecules and binary code, all highlighted with luminescent hand-made glass tiles that make the light dance as the viewer walks past.

“I see the mural as a contemporary example of the bas-relief art form that updates the ancient practice of inscribing messages and symbols into stone. Bas-relief has a unique tactile quality that attracts the eye and combines elements of painting and sculpture together,” Gadbois said in his proposal for the project.

The choice of symbolism was a deliberate one. The selection committee for the piece wanted something to reflect the core areas of study at UNM-LA: science, technology, engineering, math and health sciences, or STEMH. Submissions from artists were received in early 2012 and five were selected to present their concepts in June of that year. Gadbois’ concept was selected as the winner.

“It was a great honor,” Gadbois said. “I was dutiful about addressing STEMH. That was what the committee was looking for. That was important to me.”

Gadbois is not new to public art installations. He was commissioned to complete another cast concrete piece for the Tri Cities Cancer Center in Kennewick, Wash. in 2008. He is also an accomplished painter and teacher who has exhibited in New York, Los Angeles, Portland, Seattle and Santa Fe. His work is included in many private and corporate collections.

“I’m fascinated by science ─ that it comes up with these visuals. The thing about molecules really attracted me,” Gadbois said. “I’m into symbols and molecules as a symbol of something. They kind of remind me of petroglyphs in a way.”

“The seed idea or ‘the eureka moment,’ came from actually going to the library at UNM-LA,” Gadbois said.  “I wanted to research images. I saw for the first time, these images from bubble chambers and super colliders which make these spirals and arched lines and suddenly that was like, aha! I wanted this to be the core of what this mural was about.”

The project presented some challenges, such as how to fabricate such a large piece and make it manageable.

“I’m an old schooler and I did it old school,” Gadbois said.

An experienced commercial illustrator, Gadbois was used to using pen and ink and French curves, so he first made a drawing.

“I had to project the drawing on a wall to see how thick the channels were and that was the difficult part,” he said.

Next the drawing had to be digitized, and Gadbois sent an electronic file to the fabricator in Texas where it was converted to CAD. Once converted, he was able to make specific adjustments to line thickness and proportions until he was satisfied.

Once the digital files were complete, molds were then carved out of foam by a computer-controlled router, which uses the digital file to guide the router. The mold was then filled with the terra cotta tinted glass fiber reinforced concrete. The panels were shipped to Los Alamos by truck.

While the panels were being constructed, Gadbois set out to make the glass tiles that fill the channels and give it its vibrant color.

“I had two different ideas,” Gadbois said. “I’d seen cast glass and I thought it would be great to have parts made from that. That turned out to be way too expensive. Then I discovered a resource in Santa Fe that was an amazing state-of-the-art facility, with a cutting edge approach to glass.”

Gadbois took a class there and was then invited to come to the open studios and hand-make the tiles, which he admits was a laborious process.

“There were happy accidents while making the tile,” he said. “The rounded corners were something I hadn’t thought would happen.”

When it came time to install the 150-pound panels, there was the challenge of wrestling them into place without damage.

“There was a lot of huffing and puffing and you’re up in the air trying to get it [the panel] onto this little clip system.” Gadbois said.

He also had to deal with the summer heat and smoke from the local forest fires burning at the time. Once the panels were secured to the wall, the tiles took about two weeks to place, grout and seal. Gadbois then hired a local stonemason to help with the installation of the stacked stone retaining wall and flagstone sidewalk, which were part of the original design.

“UNM Los Alamos is extremely pleased to have our latest art piece on campus,” Wismer said. “We thought giving the artists a STEMH theme might limit their creative ideas, but we found that was not true. The Power of Code is a wonderful piece incorporating the various disciplines of instruction at UNM-LA and creating a pleasant addition to the Los Alamos community.”