Pssst … ‘Rumors’ Is In Town 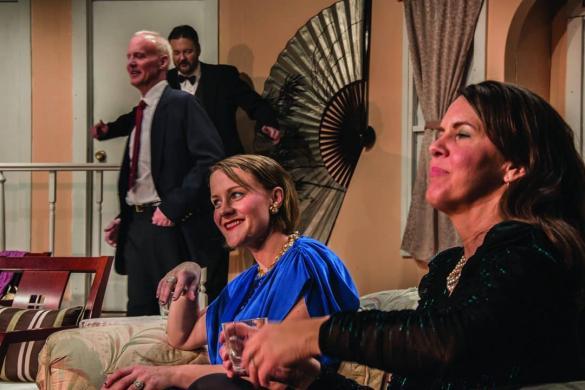 ‘Rumors’ is the great Neil Simon’s only farce. This play is just for laughs, having no other message, as you should be able to ascertain from the plot, which goes like this.

Four couples are attending an anniversary party for their unseen host, a New York deputy mayor and his wife.

The first couple arrives to discover that the host has shot himself in the ear and his wife has disappeared. The party guests are desperate to hush up the possible scandal.

For much of Act I, the party’s earliest arrivals try to keep events a secret from later arriving guests. Later, the police arrive and the secret has to be kept from them.

This play is well directed by Patrick Webb. The physical humor and quick repartee by the ensemble cast is a credit to his talents. The set is gorgeous.

All the actors do a great job. It’s been fun to see Holly Robinson (Claire Ganz) get better and better in each production she graces. She makes the caustic Claire seem like the brains of this crazy bunch while also being funny.

Another standout is Thomas Graves as Glenn Cooper. Graves does a standout job of making this guy charming as well as smarmy.

Tami Martinson as Cookie Cusak handles the physical comedy involved in the role with aplomb. Also good as her spouse Ernie, Larry Gibbons brings life to the quietist character in the play.

Paul Lewis and Trisha Werner are up to snuff as Ken and Chris Gorman. Cindy Hines is great as the least likable character, Cassie Cooper.

Trevor Nickless puts in a good performance in the small role of the exasperated Officer Welch.

Now on to Ian Foti-Landis as Lenny Ganz. His is the biggest role and he puts in a fantastic performance as the passionate, if silly Lenny. His monologue near the end of the play was its funniest moment for me.

The play didn’t please me half as much as the cast. Yes, it’s funny, at least most of the time, but it’s a Swiss cheese of plot holes that force the players to work really hard to make their characters believable.

To their credit, they manage to do it.

Why doesn’t anyone ever think of just having the hidden host tell the cops he accidentally shot himself?
Why is the group so intent on keeping this secret from each other if they are all friends? The fact that these questions bother me at all is an indicator that farce is not my favorite form of comedy.

But what makes a farce go, is that the plot works, even if it’s really silly. This one doesn’t. The play is also about 45 minutes too long.

But that said, there are plenty of laughs to be had here, and a great cast makes this evening at the theatre a fun time.