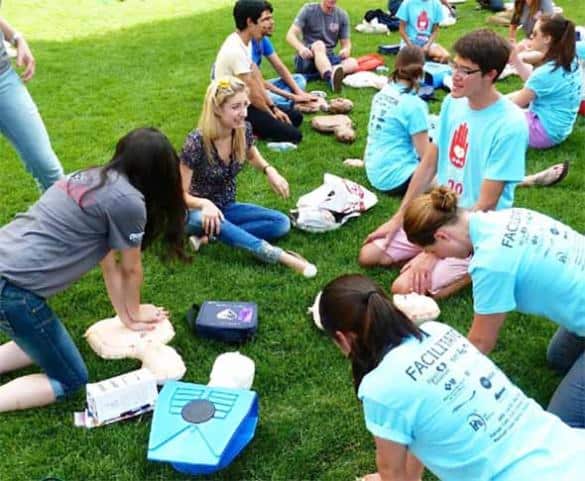 For the 6th year in a row, the Los Alamos Fire Department (LAFD) is offering a free Project Heart Start course.

The community is invited to attend one of three sessions starting at 9 a.m., 10 a.m. and 11 a.m. Saturday, June 15 at Fuller Lodge and learn to save a life in 30 minutes.

Because 70-80 percent of cardiac arrests occur in the home, it is important to learn CPR. Children as young as elementary school age have provided CPR that saved a family member.

LAPD also teaches a hands only CPR class for Los Alamos Public Schools and train 200-300 students annually. LAFD AHA instructors have certified Los Alamos Police Officers in Basic Life Support CPR and bleeding control. Thanks to their efforts, two people have survived who may not have.

Often these individuals are definitely too young to die. It might be a colleague who was 55 years old and had been well all his life or a woman who thought women were immune from heart disease, thinking it’s a men’s disease.

The key to survival involved creating a seamless emergency medical services system. At the heart of the system were members of the public. These individuals learn the three actions that one must take if someone suddenly collapses in front of them and is unconscious.

The response should be to immediately call 911 or have someone else do it, begin chest compressions to restore circulation and call for an automated external defibrillator (AED).

In New Mexico, with the support of the New Mexico Heart Institute Foundation and KOAT- TV, there is Project Heart Start. It is a program that trains as many individuals in New Mexico as possible to save a life of someone who suffered a sudden cardiac arrest, maybe is having a heart attack or is choking to death. More than 30,000 people have been trained in New Mexico to respond to these emergencies. LAFD wants you to become part of this growing community who has taken the Project Heart Start course and learned how to respond.

The course has four components: First, we teach you the new hands-only CPR which begins by recognizing that someone is unconscious and then do three things: begin chest compressions, call 911 and request an AED.

Hands-only CPR is easy because you no longer have to provide mouth-to-mouth breathing. This makes it much more likely that individuals will respond to someone who is in sudden cardiac arrest. The other skills include learning how to save someone who is choking, how to use the AED and how to recognize the signs of a heart attack and what to do.