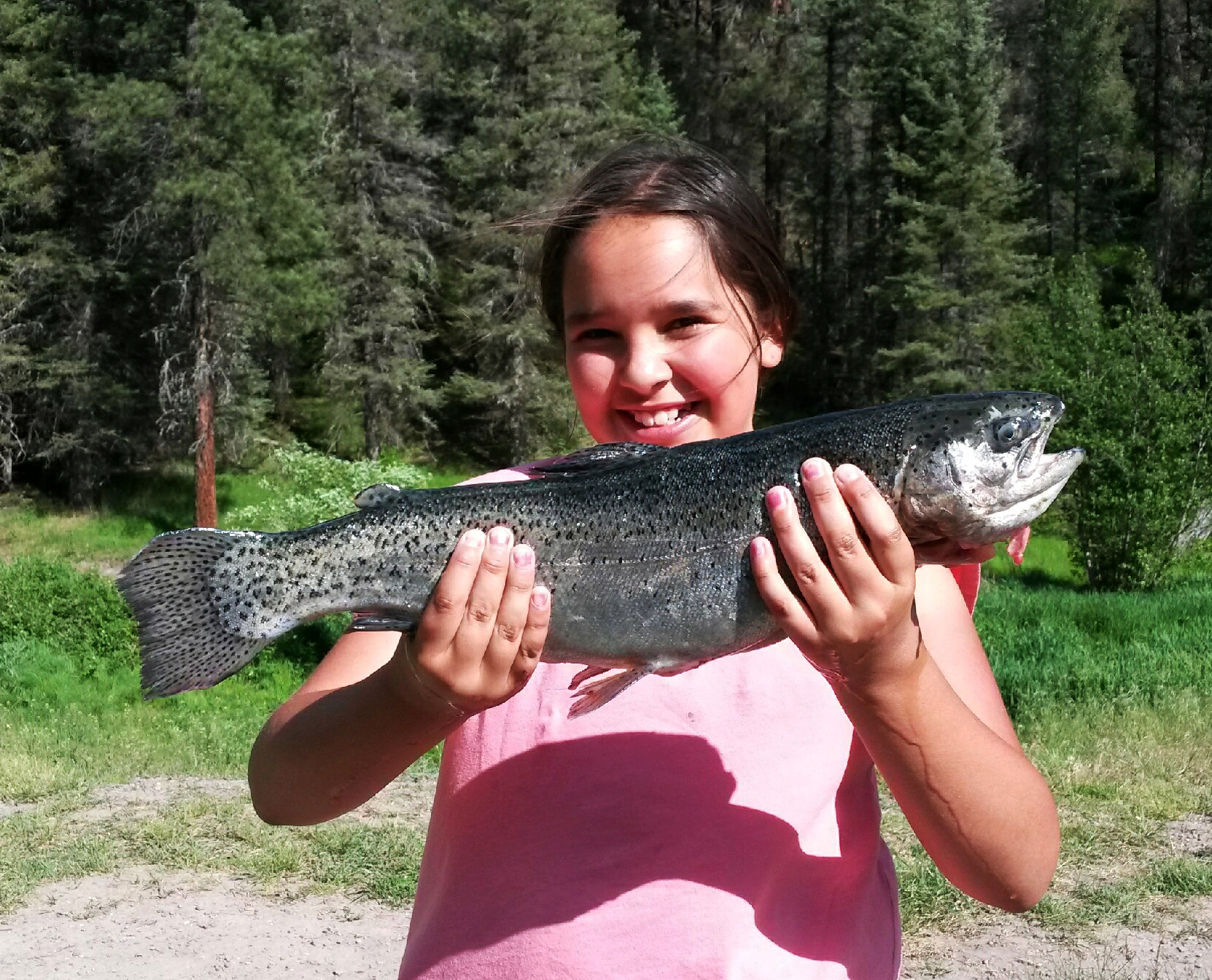 Anglers should be catching fatter fish this summer because the New Mexico Department of Game and Fish is growing them even bigger than ever.

“I don’t know what they’re feeding them down at the hatchery, but they need to keep it up,” says Josh Anspach Hanson, 34, of Albuquerque. “It’s sure made my fishing really exciting again.”

While fly-fishing below the Red River Fish Hatchery last fall, Hanson hooked into something much larger than the average-size, stocked rainbow trout he’d been catching all day.

“I thought it was one of those big, wild browns like I caught there last year,” says Hanson, who grew up in Montana where he learned to fish on renowned rivers like the Big Horn and Gallatin. “Then this monster just exploded out of the water.”

At more than 20 inches, the silver-sided, stocked rainbow trout put up a great fight. After landing and releasing it, Hanson thought she was going to be his “big fish” of the day. That was until he caught three more big, stocked rainbows that afternoon. He lost two, but landed the last just yards shy of the hatchery parking lot. Lucky for him, a couple of fellow anglers on the bank were watching his battle and took a picture of him with his 23-inch trout. Hanson later posted it on the Department’s Facebook page.

“Man, that was exciting catching those big trout in that little stream,” Hanson says. “That was the best day I’ve had fishing since moving here.”

Hanson, a pathologist at the University of New Mexico Hospital, moved to Albuquerque in July 2012. He and his wife Jennifer, a speech pathologist, have a 3-year-old son, Parker, who is just learning to fish. Because of the big fish program, Hanson says he can’t wait to take his son fishing.

That’s just what the Department had in mind when it created a new program to grow larger trout at several of its hatcheries — keep anglers excited about the sport. Anglers can check the Department’s website at www.wildlife.state.nm.us for the latest report showing where the big fish are stocked.

The idea for the program grew from the tremendous positive responses the department has received from anglers who had caught big trout, stocked in numerous fishing areas during the past few seasons.

Many of those fat trout were the first generation raised at the Los Ojos Fish Hatchery after it had been closed for decontamination to eliminate whirling disease a few years ago. About 1,000 fish had to be held over at the facility to ensure they were free of the disease. They grew to around 17 inches each before being stocked in nearby Hopewell and Canjilon Lakes and the Chama River, said Eric Frey, the department’s sport fish program manager.

Those hefty trout got the big fish program rolling and the drought kept them coming.

Large trout raised at the Red River fish hatchery and usually stocked in Shuree Ponds on the Valle Vidal had to be diverted to other waters because of low levels in the ponds the last several years, Frey said.

Some of those big trout were caught by anglers on the Rio Costilla or Red River while kids were pulling them out of fish hatchery ponds and places like Tingley Beach. Even remote Charette Lakes, far out on the plains of eastern New Mexico, got a load of the big fish.

And the response from anglers couldn’t have been better, Frey said.

“People all over were telling us they were thrilled with what they were catching,” he said.

So a plan was hatched to continue growing bigger fish at several northern New Mexico hatcheries to augment regular loads of catchable-size, stocked rainbows. This year, fish hatcheries at Red River and Los Ojos will raise thousands of fish in the 15 to 17-inch range for stocking in about 20 selected lakes and ponds.

Frey said kids’ fishing ponds at hatcheries and lakes that disabled and senior anglers frequent most will get the bulk of the fish at first. Tiger Lake near Aztec, Tingley Beach in Albuquerque, Cowles Pond and Monastery Lake on the Pecos River, Morphy Lake near Las Vegas and Canjilon Lakes are just some places that will receive them.

Frey said the idea is to keep fishing exciting for younger and older anglers.

“But I suspect as the project gains popularity we will have to consider expanding it to some of our larger rivers and streams too,” Frey said.

The Department started stocking sterile trout to reduce the possibility of crossbreeding with native cutthroats that are being reintroduced to many waters across the state.

Sterile trout grow bigger and faster because they are not spending as much energy on achieving sexual maturity and reproduction, said Bernard who holds a master’s degree in fisheries and aquaculture from Pittsburg State University in Pittsburg, Kansas.

Triploid trout also grow up to be very aggressive feeders, which is sure to please anglers.

“We had a salmon fly hatch here recently and those trout in the raceways were ripping them up,” Bernard said. “It was impressive.”

Trout eggs gathered for hatchery rearing are subjected to a heat or pressure process following fertilization that causes the eggs to retain a third chromosome, hence the name “triploid.” The extra chromosome renders the resulting fish incapable of reproduction but it is normal in all other features.

Bernard, who has been with the Department for nine years, says raising bigger fish requires a group of trout to remain on site longer and eat more than a typical supply of “catchables.” Most trout reach catchable size of about 10 inches in a little under a year, while the big 17-inch trout require another six months, said Bernard.

New Mexico has six hatcheries cranking out an estimated 16 million fish annually, including trout, bass, catfish, bluegill, walleye and salmon. The state hosts an estimated 160,000 resident and nonresident anglers who spend $268 million annually on fishing, according to a recent study commissioned by the Department. Anglers help support more than 7,900 outdoor recreational jobs in New Mexico and contribute about $51 million in state and local tax revenues, according to the study.

The full study, including county-by-county analysis, is available online at: http://www.wildlife.state.nm.us/download/publications/press-release/NMDGF-Economics-of-Fishing-Hunting-and-Trapping-Final.pdf.

Karl Moffatt is a writer, photographer and media relations coordinator for the New Mexico Department of Game and Fish. Contact at karl.moffatt@state.nm.us or 505.476.8007.