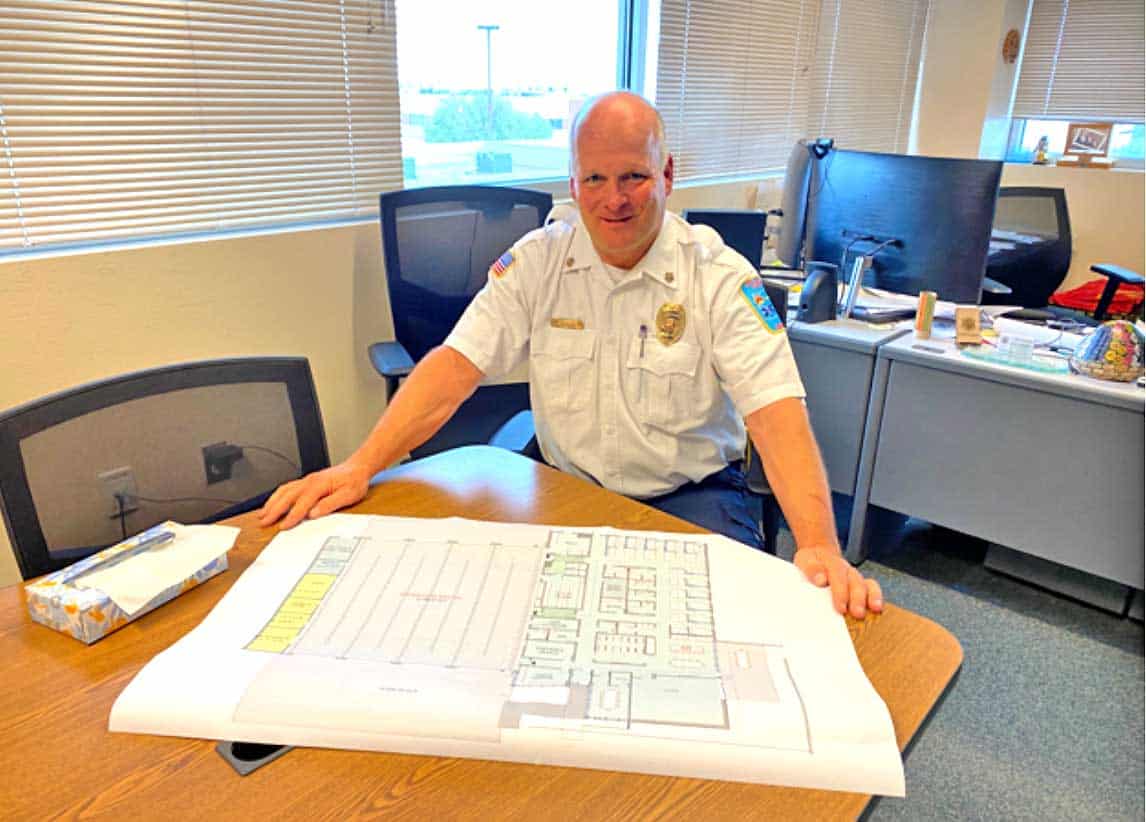 Fire Chief Troy Hughes looks over plans for new Station 5, which will be the first of several replacements of LAFD’s stations. Station 5 is owned by DOE and located on West Jemez Road.  Photo by Kirsten Laskey/ladailypost.com

Firefighting has changed a lot since many of the Los Alamos Fire Department’s stations were built around 70 years ago. As a result, the process is underway to replace the fire stations – starting with the ones located on Los Alamos National Laboratory property.

“The plan, the Laboratory plan or DOE plan, is we are going to replace two stations,” Los Alamos Fire Chief Troy Hughes said. “The first one, we’re actively going through the design process now, they’re about at the 30 precent completion factor on the architectural design, which is kind of a big mark …”

The first to be replaced is Station 5, which is located on West Jemez Road, near the back gate on N.M 501., he said. The new building is expected to “rise out of the ground” starting in October.

Station 5 is the first of three stations, owned by DOE, that will be constructed, Hughes said.

The other two will replace Station 1 located near the vehicle access portal in TA3. This station will be replaced by two new stations. Station 1’s crew will be split between a new facility on Pajarito Road, near TA-63, and a second one located between Los Alamos County’s Eco Station and Elk Ridge.

While their locations are earmarked, there are no design plans for these two stations yet, Hughes said.

“As soon as we get the first one in the process, surely we will do the design and all that based on the locations of the other two at LANL,” he said. “They will be very similar to the first replacement station with some minor differences dependent on building site differences.”

While DOE is planning to replace its fire stations, the County is making similar plans.

“The County has placed in its capital improvements plans the replacement of Station 4, which is by the golf course, for 2024,” Hughes said. “And we’re looking at a lot of funding sources for that – our state fire funds (or) maybe the Governor’s special project money that they occasionally distribute. We don’t have a location completely earmarked for that, we looked at multiple places and then Station 6 (located near Los Alamos Airport) is programed in at 2026.”

While replacement for the County fire stations is scheduled down the road, Hughes said the capital improvement plan for future years was tentatively approved during this year’s budget hearings. The capital project plan provides $7.5 million in 2024 and $7.5 million in 2026 to replace fire stations 4 and 6. Hughes explained that funding for these two County owned fire stations will be sought from different sources to reduce the impact on local taxpayers.

Replacement of the fire stations is necessary, he explained, because the department’s needs have changed.

“There’s a lot of new technology that will greatly improve the safety of our firefighters and improve cancer prevention within our stations,” Hughes said. “The decon room is something new to our fire stations. Segregating our stations into hot, warm, and cold zones  – similar to what we do with hazmat – to where people come back contaminated from a call with cancer causing carbons from a fire, or bloodborne pathogens from a medical call, they can shed that gear, get cleaned up, take a shower, get clean clothes and not go into living quarters … a lot of our stations right now were not built with that in mind. Even the exhaust within the bays …  the kind of trucks we buy … we’re looking at cancer prevention, and keeping potential contamination out of our living quarters…”

Space is another factor.

The stations owned by LANL were originally built in the 1950s and were not designed for male and female quarters, he said. In fact, most of the fire stations are getting up in age. Station 5 and Station 1 were built in 1952, Station 4 was built in 1964, Station 6 in 1991. Additionally, the new stations will allow for some future expansion of crew size or apparatus and equipment that needs to be stored indoors.  They are currently out of bay space, which forces them to store some equipment and apparatus outside exposed to the elements.

Energy efficiency is being incorporated, too, such as greater insulating properties and LED lighting, Hughes said.

“One of things firefighters didn’t have in the 50s was fitness requirements … (so) more gym facilities and things like that are being built in the new facilities.”

Plus, the older buildings require a lot of work and it’s work that is difficult to do on the buildings because of their age, he said. It is hard to penetrate through the masonry walls, the roofs occasionally leak, and older heating and cooling equipment is not efficient in maintaining climate control in the current stations.

For all these reasons, he said there is a lot of excitement for these new stations.

“We’re excited. It’s great news for our people. We can put them in a safer more energy efficient building … where they can do the things necessary to prepare themselves for response,” Hughes said.