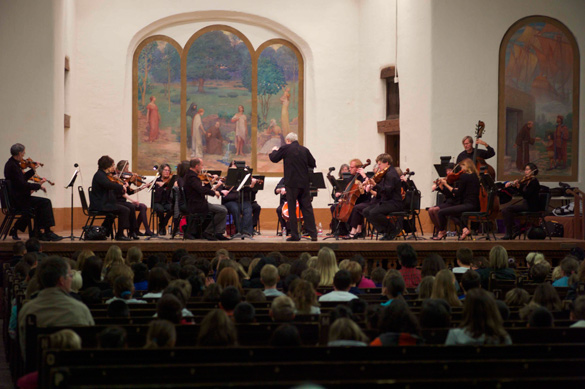 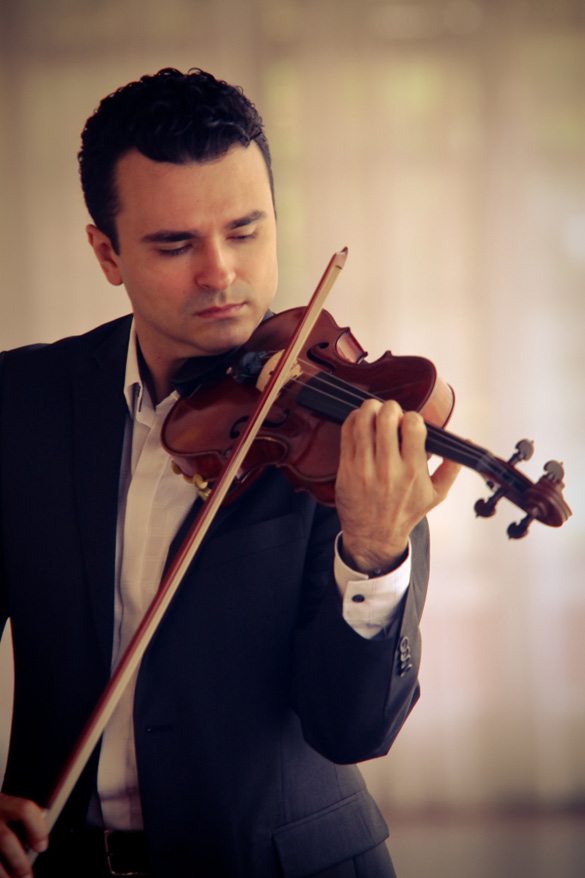 The holiday celebration continues with Santa Fe Pro Musica’s presentation of Music for the Royal Fireworks, a concert featuring celebrated works of Telemann, Vivaldi and Handel.

Telemann composed his Water Music in 1723 for the centennial celebration of the College of the Admiralty in Hamburg, Germany. For the festivities Telemann wrote a suite with representations of the River Elbe, and the gods and nymphs of the sea. Nereus, the Old Man of the Sea, is a trusting and gentle god who, with his wife Doris, had fifty lovely daughters, the nymphs of the sea (Nereids).

Autumn and Winter from The Four Seasons

Vivaldi’s violin concertos The Four Seasons constitute one of the most famous and beloved collections of string music. Each concerto is prefaced by a poem that describes its contents, and their programmatic nature brings seasonal sights and sounds to the ear.

I. The peasants celebrate the good harvest with singing, dancing, and drinking wine (Vivaldi notated some of the solo violin passages with the description “the drunkard”).

II. When the singing and dancing stops, everyone falls asleep.

III. The hunters set out with horns, guns, and dogs. The wild beasts flee, but become tired and are caught.

I. Shivering in the cold and in the icy wind, and with chattering teeth, he stamps his feet to keep warm.

II. He contentedly sits by the fire while the rain beats down.

III. Walking on the ice, first carefully, then boldly, he slips and falls. The winds fight each other, but winter still brings pleasure.

Music for the Royal Fireworks

To celebrate the end of the War of Austrian Succession (1748), King George II hired Chevalier Servandoni to design a fireworks display. Servandoni was a famous stage designer for the Paris Opera and well known for his spectacular stage machinery. For this commission, he designed a fireworks machine 114 feet high and 410 feet long, containing more than 10,000 rockets, and brought in a team of Italian pyro-technicians to operate the huge contraption. At the King’s request, Handel wrote music for a large ensemble of “war-like instruments” to accompany the fireworks display.

On April 21, 1749 there was a rehearsal held in Vauxhall Gardens, and according to varying descriptions, between 50 and 100 wind and percussion instruments participated. Public interest was keen; the rehearsal drew an audience of 12,000 and created a traffic jam that tied up London Bridge for hours. The actual performance took place on the evening of April 27, 1749 and it did not go well. English and Italian technicians argued about the operation and safety of the machine. There was an explosion, and a pavilion caught fire. The frustrated Chevalier Servandoni drew his sword and had to be disarmed and arrested.

Learn more about the music you love! Thomas O’Connor, Santa Fe Pro Musica Conductor and Music Director, will present a “behind the scenes” discussion of the music one hour prior to each concert at the St. Francis Auditorium – free to ticket holders. Brazilian-born violinist Cármelo de los Santos enjoys an exciting career as a soloist, chamber musician, and pedagogue. From his extensive concerto appearances to his recent performances of the 24 Caprices by Paganini, his virtuosity and musical commitment captivate audiences worldwide.

At the age of 16, Cármelo de los Santos gained celebrity status in Brazil by winning its most prestigious music competition, the Eldorado Prize, in São Paulo. Since then he has been a guest soloist with more than 40 orchestras, including the New World Symphony, Santa Fe Pro Musica, the Santa Fe and New Mexico Symphonies, the Montevideo Philharmonic, Orchestra Musica de Oltreoceano (Rome), and the major orchestras in Brazil. Cármelo de los Santos has won prizes in several international competitions, including the first prize at the IV Júlio Cardona International String Competition (Portugal), first prize at the Music Teachers National Association Collegiate Artist Competition (USA), and second prize in the Young Artist International Competition (Argentina).

Cármelo is an Associate Professor of Violin at the University of New Mexico in Albuquerque where he lives with his wife Eugenia and son Arthur. He plays on a Carl Becker violin, 1929.