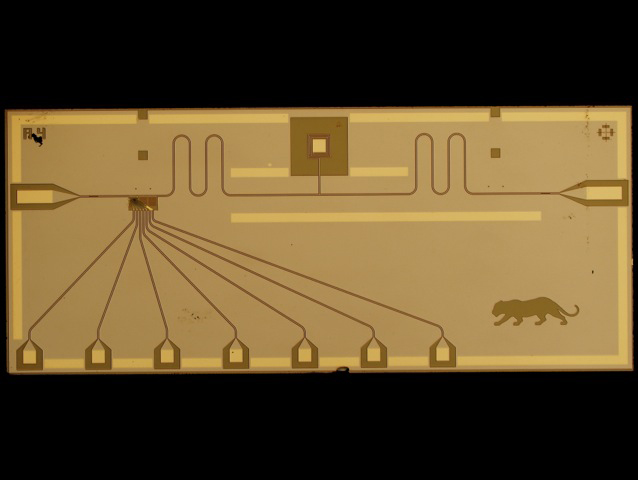 Micrograph of a quantum bus device similar to the one measured for this experiment. Note the Princeton tiger is 1 mm from head to tail. The spin-orbit qubits are located at the nexus of the seven gate electrodes. Photo by K. Petersson/Princeton

In yet another step toward the realization of a practical quantum computer, scientists working at Princeton and the Joint Quantum Institute (JQI) have shown how a major hurdle in transferring information from one quantum bit, or qubit, to another might be overcome.*

Their so-called “quantum bus” provides the link that would enable quantum processors to perform complex computations.

The JQI is a collaborative institute of the National Institute of Standards and Technology (NIST) and the University of Maryland College Park.

Qubits are unlike a classical bit because they can be not only a 1 or 0 but also both, simultaneously.

This property of qubits, called superposition, helps give quantum computers a tremendous advantage over conventional computers when doing certain types of calculations.

But these quantum states are fragile and short-lived, which makes designing ways for them to perform basic functions, such as getting qubits to talk to one another—or “coupling”—difficult.

“In order to couple qubits, we need to be able to move information about one to the other,” NIST physicist Jacob Taylor says. “There are a few ways that this can be done and they usually involve moving around the particles themselves, which is very difficult to do quickly without destabilizing their spins—which are carrying the information—or transferring information about the spins to light. While this is easier than moving the particles themselves, the interaction between light and matter is generally very weak.”

Taylor says you can think of their solution sort of like playing doubles tennis.

“Whether or not a team will be able to return a serve depends entirely on how well they play together,” Taylor said. “If they are complementing each other, with one playing the front half of the court and the other playing the back half, they will be able to return the serve to the other set of players. If they are both trying to play in the front court or the back court they won’t be able to return the serve and the ball will go past them. Similarly, if the spins of the electrons are complementary, their field will affect the field of the photon as it goes past, and the photon will carry the information about the electrons’ spin to the other qubit. When the spins are not coupled, they will not affect the photon and no information will go to the other qubit.”

The spin-orbit qubits are a pair of indium-arsenide quantum dots that have been engineered to enable strong coupling between the spins of the electrons trapped inside the dot and the electrons’ positions within the dot.

This in turn allows the magnetic field of the qubit, comprising spins, to couple with the field of microwave photons traveling through a connected superconducting cavity.

The experiment, which was the culmination of five years of effort, took place at Princeton University. NIST/JQI provided assistance with the quantum theory.