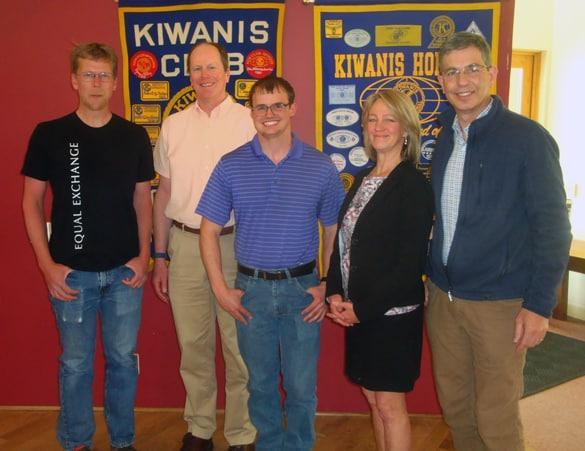 The Kiwanis Club of Los Alamos held its second Primary Election briefing recently. All six candidates seeking to be among the four Democratic candidates for County Council were invited to come and speak.

All six confirmed that they would come, but one of them—Quentin David Dimick—came down with strep throat and was unable to attend.

At the April 17 meeting, the club drew names from a cup to determine speaking order, and then each candidate present had five minutes to address his/her qualifications, reasons for running, and goals if elected. Brief summaries of their remarks are provided below, in the order in which they spoke.

Sara C. Scott has a 30-year perspective on Los Alamos County. She has raised children, pursued a scientific career, and enjoyed the recreational, cultural, and educational benefits here.

Her work has involved “responsible management” of budgets totaling more than $100 million and oversight of a staff of more than 400. Throughout her career, she says in her literature, she has maintained “fundamental respect for diversity, transparency, and communication,” while seeking to improve planning, operations, and “constructive federal engagement.”

At Kiwanis, she recalled a trip to Siberia in which she led a U.S. team that hoped to assist the Russians in implementing measures to protect weapons-grade plutonium. “We overcame cultural, language, and technical challenges,” she said, “to hammer out a plan” that identified the scope of work, the materials and locations needed, and appropriate technologies.

“I learned a lot in this effort” and others like it, she told Kiwanis. “I’d like to put that experience and know how” to work for the County Council.

She would like to help the county improve its economic base, supporting and assisting the growth and health of businesses and tourism; protect the environment and move ahead with initiatives such as the county’s carbon-neutral goal; expand recreational opportunities for residents and tourists; address the need for a range of housing; and engage actively with “our Northern New Mexico neighbors….”

James N. Robinson grew up in Los Alamos, graduating from Los Alamos High School, obtaining an associate’s degree from the University of New Mexico-Los Alamos (UNM-LA), and going to the main UNM campus in Albuquerque to earn a bachelor’s degree.

In his literature, he notes, “Many of my milestones in life happened in Los Alamos—my first job, my first apartment, and my first purchased home.”

He reminded Kiwanis that he had previously spoken at the club when he was running for the UNM Advisory Board. He said he has been involved in other organizations as well, and “has learned how things are done.”

He foresees “a bright and prosperous future ahead” in Los Alamos, but expects “many changes,” including competition for the Los Alamos National Laboratory contract.

In his literature, he says, “As your councilor, I will focus on upgrade and expansion of our infrastructure and housing, clarification of the county ordinances, expansion of the environmentalism initiatives, and development of tourism and recreation.”

Enlarging on those topics, he spoke of the clash between “aging infrastructure” and the hopes of young people who come here needing housing. He wants to clarify and add measurable standards to some ordinances. He noted that Los Alamos has 60 miles of trails, plus pools, tennis courts, and a golf course. He would like to build on this base and add to it, serving tourists.

He invited voters to visit his website at, www.vote-robinson.com .

Although David Izraelevitz lived in “six different towns and two different countries while growing up,” Los Alamos is definitely his hometown now. He has lived here for 23 years, and he and his wife, Terry, have raised three children here.

He has served on the County Council for seven years. He is president-elect of the New Mexico Municipal League; a retiree from Los Alamos National Laboratory; and president and co-founder of the Los Alamos Community Foundation. He has also been involved in Big Brothers/Big Sisters; has been president of the Los Alamos Jewish Center; and has served five years on the Planning and Zoning Commission.

He hopes to serve one more term on the County Council—his last under county rules.

He emphasized three things in his talk to Kiwanis:

Councilors are “stewards” of the county, making sure that the police “are out there,” that the streets are clean, etc. “There are always things you can do better,” he said, but during his years in office, improvements in efficiency have made it possible to cut staff by 15 people.

Communication is vital, he said. “We should be out there listening to people” and making a point of “being accessible.”

However, the “most fun but the hardest is strategic planning,” determining “what Los Alamos is going to be like—10, 15, 20 years from now.”

At first he wanted to be a physicist, but then he became interested in economics, found that he believed deeply in co-ops—and became one of the founding members of the Los Alamos Co-op Market, where he has now been general manager for two years. When the co-op was in trouble, he said, he came back, determined to help save it.

So why is he running for County Council? “I spent a lot of time thinking about it,” he said—months, in fact.

His work at the co-op is more than a full-time job, he said, and people told him that a good councilor should spent 15 to 20 hours a week on work at the county. Still, after attending several council meetings “to see what I would be signing up for,” he finally decided to run.

The co-op is “coming along nicely” now, he said, and, “I think I can do the same thing on the Council … I think I would be good at the job.”

He commented that the population in Los Alamos has been “flat” since the late 1970s, but, “The business community has become smaller.” He would like to focus on getting more businesses established in Los Alamos.

He also believes that unless efforts are made to preserve the environment, it will have a “dim future.”

Randall Ryti has lived in Los Alamos since 1992. He was a co-founder of Neptune and Company, Inc., and he has served on the Pajarito Environmental Education Center (PEEC) Board for six years.

He served four years on the Transportation Board; he has been a Los Alamos County Science Fair volunteer for 13 years; and he is a Leadership Los Alamos graduate.

In his literature, he says, “Los Alamos government is built on collaboration. My experience as a scientist, small business owner, and volunteer … demonstrates my qualifications and my enthusiasm to serve on the council. If elected, I will seek evidence-based solutions for issues of concern to the county.”

In his talk, he gave several examples of citizen needs.

He said he recently talked with an elderly couple, and one of them said he can no longer drive, but, “’I have three cars.’”

He mentioned the impact that housing options can have on quality of life.

And he said he would like to see the county provide a water pipeline to the ski hill.

Kiwanis had only a few moments for questions and answers to the Democratic candidates, but two strong questions drew interesting answers.

Chuck Kooshian, Immediate Past President of Kiwanis, asked the candidates what the council should do if a non-profit organization is chosen as the new contractor at the laboratory—a change that would, under existing state law, result in a massive loss of gross receipts tax income to the county.

Morrison said, “Scale everything back.” He noted that a non-profit (the University of California) ran the laboratory for many years, and the county still managed to survive.

Scott also spoke of scaling back, but she also mentioned talking with the state in an attempt to change state law so that the county could collect taxes from a non-profit contractor. And she suggested talking with the Department of Energy (DOE) about the problem. “The lab cares,” she said.

Izraelevitz said the county has about $20 million in reserves, and could weather such a transition for a while, but eventually, it would have to scale back. There is no question, he said, that such a change would have “a dramatic effect” in the long term. He mentioned, for example, that county transportation (which, he said, still costs the county $1 million per year despite income from grants), might have to be cut. However, he said, “We would work very, very hard … with the Legislature” to try to find a solution.

Ryti said such a change might bring about a “fairly draconian future.” The county could increase its own tax rate, he said, if it had public support for such a move, and it would work with DOE. However, it would be “a very difficult time.”

Robinson said, “Yes … start conversations with the federal government.”  He said the county could put on hold all public recreation programs that had not yet been started. He also said the county might need to make cuts at the landfill. But, he said, “We survived it before. We could do it again.” It would be essential, he said, that the county be in constant communication with the public. “That’s our job,” he said.

Kiwanian Paul Cunningham noted that Israelevitz had mentioned making more space for the community by “going up.” He asked what Israelevitz meant by that comment.

Israelevitz said that the Comprehensive Plan allows for mixed-use development in certain circumstances. He said, for example, that the bottom of a multi-story building downtown could be used for commercial development, while the second and third floors could be devoted to apartments. He emphasized, however, that, “You can’t just let everybody build whatever they want.”

Editor’s note. The next Primary Election event is May 1, when all candidates running for county assessor or county sheriff will be invited to come and speak.