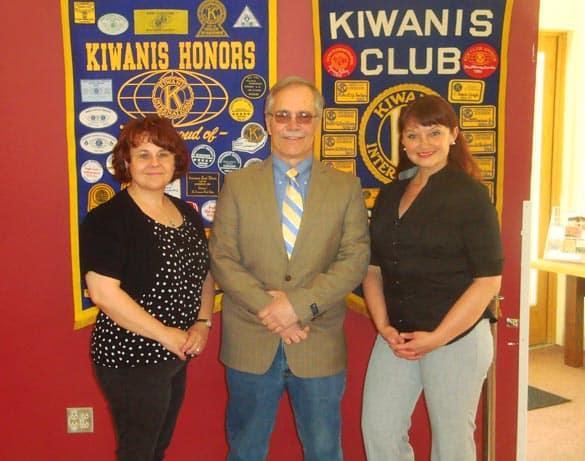 The Kiwanis Club of Los Alamos began its Primary Election Speaker Series with talks by candidates for County Council from left, Libertarian Helen M. Milenski, Republican Brady W. Burke and Republican Dawn C. Trujillo Voss. The Democratic candidates for council were invited to a subsequent meeting, and their remarks will be adderessed in an upcoming story and photo. Courtesy/Kiwanis

Burke and Voss are Republicans. Milenski is a Libertarian. Another Republican candidate, John L. Bliss, was unable to attend but may come and speak if there is an opening  later in the Kiwanis Primary Election Series.

Speaking order was determined by drawing. Each of the candidates was given five minutes to speak on his/her qualifications, reasons for running, and goals if elected. After all three had spoken, there was enough time left for a few questions, and all of the candidates lingered after the meeting ended, answering more questions from audience members.

Brady W. Burke, the first Republican to speak, described himself in his campaign literature as a “small business owner, fiscal conservative, (and) proponent of smaller government, transparency, and accountability.” He told Kiwanis, “We need to make significant changes as to how we lead and govern our community. I am driven to make these changes.”

He asked, “Why do we have a contentious relationship between the council and the people” on such issues as the Nuisance Ordinance, spending on large discretionary projects, giving away resources “to entities outside of Los Alamos,” and the existence and operation of the sheriff’s office?

“The County Council has forgotten, or chosen to ignore, the voters who placed them in office,” he said.

If elected, he said, he would “reaffirm our (councilors’) roles as public servants.” He said, “We have to tell the voters what we are planning so they can assess if we are doing what they want. Only by listening to the community can we expect to regain their trust.” Free and open discussion are essential, he said.

He also said, “The county government needs to be more forthcoming and transparent with what things cost. When they present a project, they need to include all the costs, all of the labor, not just construction.” And, he said, county construction projects should create apprenticeships for students and local workers and utilize established local businesses.

Dawn Trujillo Voss, also a Republican, grew up in Española and Chimayó and graduated from Española High School. She said that when she was younger, “Never in a million years did running for office come to mind.” As a child, she wanted to be a cashier in a store.

She was the only child of a single mother, she said, with no way to get to activities. She missed many opportunities.

In her 20s, she said, she realized she needed an education. At age 24, she met her father, and he told her, “ ‘In order to soar with the eagles, you must learn to talk with the owls.’”

In the years that followed, she earned an associate degree in biotechnology and learned about radiation technology. When she wanted a change, even though she was married and a mother, she started working toward a bachelor’s degree in project management. She finished in 15 months, she said—with honors.

She found herself spending a lot of time in the library, and she started going to County Council meetings. Listening is important, she said. Many people “don’t know what is going on … We need to improve our communication. I think I can help our community change.”

Helen Milenski, the Libertarian in the race, is a long-time Los Alamos resident who graduated from Los Alamos High School. She spent two years in Santa Fe before she was emancipated from her parents.

Later, as a married woman with children, she went to work for the state (working in the Governor’s Office, among other places). She moved on to other jobs, then, in 2009, became “unemployed in the downturn.”

She responded by working toward an associate degree in engineering, an effort she funded with a scholarship and an internship at Los Alamos National Laboratory (LANL). She now works at LANL, and, she said, “I love my job.”

She campaigned for Gary Johnson, the Republican governor of New Mexico from 1995 to 2003, who subsequently switched to Libertarian and ran for President.

Milenski said she is listening to the public, and “I’m not going away.” She made two cards available. One, covered with formulas, said, “The Solution is Simple. Helen Milenski for County Council.” The second said, on one side, “Libertarian—Peace, Prosperity, Freedom.”  On the flip side, it said, “New Mexico Libertarian Party, Helen M. Milenski, Vice Chair.”

She said the Recreation Board has done “a number on our community.” She also has concerns about code enforcement.

And she wants to see small business succeed and educational advancement flourish here—notably at the University of New Mexico-Los Alamos.

The question and answer session after the three candidates spoke was lively.

One Kiwanis member asked all three candidates specifically why they decided to run for council.

Burke said the deciding factor for him was the three-minute rule for public commenters at council. He didn’t think three minutes was enough time, and he felt that public comment should have influence at the meetings—and didn’t. He attended meetings of the boards, he said, and found the same problem. He decided that if he served on the council, he could “open up some of those doors.”

Voss said that she started meeting people and having discussions about the council—and then she started getting calls from people asking her to run. She said they felt that she was “approachable,” was a person who could listen, and was “down to earth.”

Milenski said she felt strongly that a councilor must “learn how to skillfully take into consideration all the different opinions,” and she felt that she could do that. She said that a friend said to her, “ ‘You live in this community … Do something to better it.’”

Steve Boerigter asked the candidates what their first motion would be if they won election.

Burke said he would try to “slow down the process.” He said the complexity of many topics that come to the council requires more time and research to ensure a good decision.

Voss said, “I agree with Brady 100 percent.” When complex decisions are made rapidly, she said, the community doesn’t have time to decide its views and express them. She said her first motion might be to “slow down the carbon-free” goal the county plans to apply to the production of electricity. When an agreement is for 40 years, she said, “our children will be paying for this.”

Kiwanis member Pat Soran said, “You all sound to me like you’re micromanagers.” He noted “all that hard work” done in advance by boards and committees, and he said that if the process is slowed down a lot, “Nothing is going to get accomplished.” He added, “You don’t have time to listen to all 17,000” people in the community.

Burke said, “I think you’re right,” but he added that although the community should keep the boards and commissions, “We must not forgo addressing the right questions.”

Voss said she appreciated Soran’s comment and understood what he meant about the work of boards and commissions, “But,” she asked, “how does that information get to anyone else?” Sometimes, she said, the final recommendation arrives at the council with blanks in information.

Milenski also thanked Soran for his comment. She said, however, “I’ve seen a lot from the boards,” but sometimes they just “don’t get the full picture.” Discussion must start earlier, she said.

Editor’s note: Abiding by the order established in the club’s earlier drawing, Kiwanis invited the six Democrats running for County Council to speak at a later meeting and answer the same questions in the same allotted time given to the Republicans and the Libertarian. The results of that second round of talks will be reported in an upcoming story.