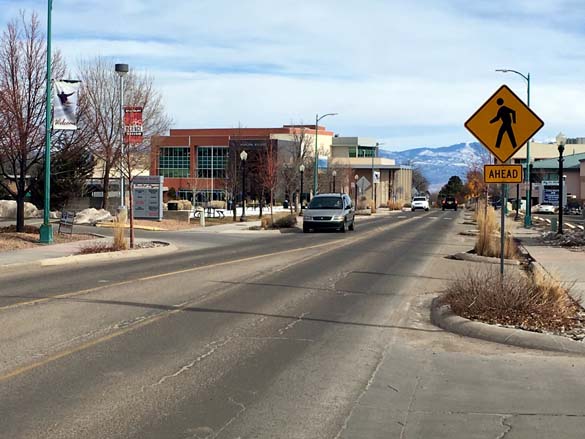 The section of Central Avenue from 15th to 9th Street is in need of work. The asphalt is in bad shape, a sewer line needs to be replaced and more parking spaces are needed.

The state of the road combined with the fact the New Mexico Department of Transportation delayed the start date to work on N.M. 502, pushed Los Alamos County to begin work on phase 2 of the Central Avenue improvement project.

The project is expected to begin in August and while the cost is still being calculated, County Engineer Eric Martinez said the ballpark figure is $1.5 million. Before the work begins, he said the design needs to be completed, the cost needs to be finalized and a bid needs to be awarded for the work.

He explained there are three reasons for the project:

Martinez said County staff would prefer to finish work on Central Avenue before roadwork on N.M. 502 begins so the community does not have to deal with two major street projects occurring simultaneously. He added a major pavement condition survey confirmed that the asphalt on this particular section of Central Avenue “is in pretty bad shape.”

Likewise, a sewer line that runs from 15th Street to the Subway restaurant needs to be reconstructed. Martinez said this is “a critical section that needs to be replaced.”

Plus, the project calls for continuing the streetscape and landscaping improvements done during the first phase of the Central Avenue improvement project, which occurred in the summer of 2014 and involved the section of Central from 15th to 20th Streets. Phase two will also take out some existing landscaping for parking and bus pullouts “to obtain more on-street parking and relocate the bus bays on the north and south side of Central Avenue right in front of the Shannon Corp. building,” Martinez said.

During the public meeting, Martinez said there were some concerns expressed by business owners regarding access to their businesses during construction. Some also wondered what the hours would be construction work.

These concerns may stem from the impact several downtown business experienced while phase one of the project occurred. During that phase of the project, several business owners said the project hurt sales by severely limiting access to their businesses.

Martinez said the public works department is listening to local businesses’ concerns. “We have opened the door and are continuously talking to businesses on this stretch of road to get their concerns and our door is always open in that respect.”

He noted that there are a few differences between phase one and phase two of the project. First, the businesses located on Central Avenue from 15th to 9th Streets have the advantage of having more than one access  to their businesses. Also, this portion of Central Avenue is shorter and should be quicker to finish. Still, there are uncontrollable factors such as the weather, Martinez said.

Martinez also emphasized improving Central will be a benefit for the whole community.

“Besides improving the utility infrastructure, it will improve the roadway condition, (have) wider sidewalks, more on-street parking and the bus stop situation will be improved,” he said, adding that the streetscape, landscape and lighting also will be “a really good visual.”