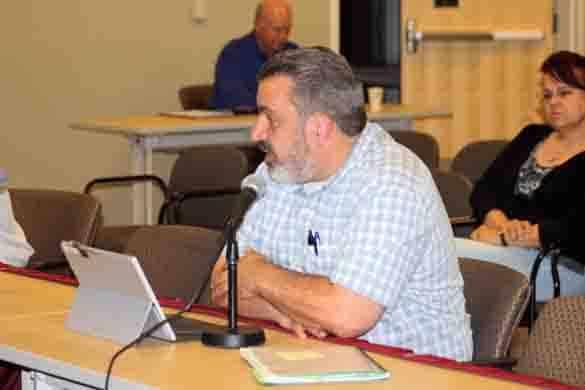 Deputy County Manager Steve Lynne presents an update on the old Smith’s, Mari Marc Plaza and Smith’s Marketplace during Tuesday’s Council work session. Photo by Kirsten Laskey/ladailypost.com
By KIRSTEN LASKEY
Los Alamos Daily Post
kirsten@ladailypost.com
The old Smith’s Food and Drug building’s stint as an abandoned building may soon be over, Deputy County Manager Steve Lynne reported Tuesday night during the Los Alamos County Council’s work session.
Lynne said Kroger has received an offer to purchase their entire portion of the Mari Mac property on Central Avenue.
The hope is that there will be substantial progress made on the deal in the next 90 days, he said, adding that the offer is going through Kroger’s internal processes of underwriting and valuation.
Lynne said it is unknown what the potential buyers plan to do with the site. However, discussions have been made regarding potential uses currently not allowed within Mari Mac’s conveyances, such as housing.
In following up on the County’s request for an amended plan of how Kroger will complete the undeveloped portion of the new Smith’s Marketplace, Kroger officials are planning to submit a written response, Lynne said. He added the company does not plan to develop the unbuilt sites based on speculation.
In his report, Lynne said Kroger is actively marketing the two vacant spaces and two pad sites but their cost structure requires a higher price and as a result, it is harder to find tenants. He said Kroger is open to considering offers for build-to-suit.
Additionally, Lynne said the Los Alamos County Economic Development Administrator Joanie Ahlers will meet with Kroger Corporate Real Estate Manager Don Barnett at the International Council of  Shopping Centers‐REConGlobal Retail Real Estate Convention later this month to continue pursuing opportunities.
Kroger officials also expressed interest in whatever help or incentives the County could provide to future tenants.
Councilor Susan O’Leary, who requested the agenda item, said, “I think this is a really important parcel for our community.”
She added the County does not own the land but given its significance this could be an opportunity for the County to have some kind of participation in the development planning.
O’Leary asked her fellow Councilors to provide feedback directing the County Manager to hire a design firm to make a few conceptual plans for the site, which could be given to the future buyers for their consideration. The plans would recommend development that addresses key issues that the County is dealing with, like housing or the need for a new  hotel. The cost for this kind of design work would be about $10,000-$15,000.
By doing so, the County could take on a leadership role and give options to Kroger, which could lead to a robust discussion about the development at the Mari Mac center, O’Leary said.
Councilor Antonio Maggiore said half of Mari Mac is occupied; he asked how the design plans would affect the current tenants. He added he would like to see multiple possibilities be considered.
O’Leary said the design plans are yet to be determined but having the plans could help further the County’s strategic goals and improve this large land parcel’s blight in ways that matter the most to the community.

Council Chair David Izraelevitz opposed the idea. Whether it was $5,000 or $15,000, he said he saw no value in it.
Menu
LOS ALAMOS