Posts From The Road: Pearl District And Emma Hotel 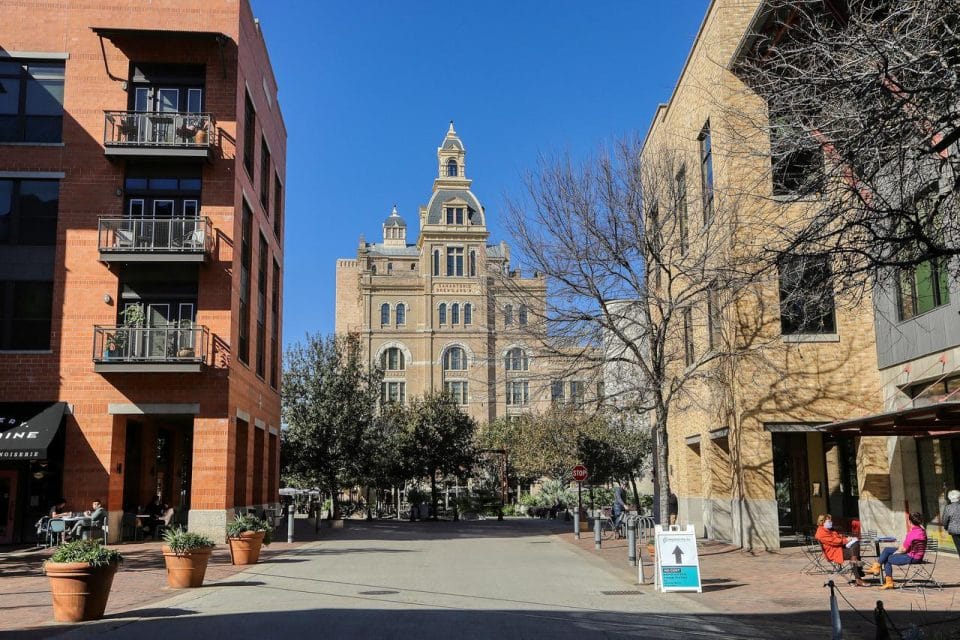 Pearl District: The Pearl District in San Antonio sits on 22 acres just north of downtown. Pearl Brewery was operated on this site from 1883-2001 before closing. The area has been saved from destruction and is now a multi-use destination featuring restaurants, offices, apartments, a park, and a hotel. The centerpiece of the complex is the former brewhouse seen in the center of this photo, which has been repurposed into the Hotel Emma. Photo by Gary Warren/ladailypost.com 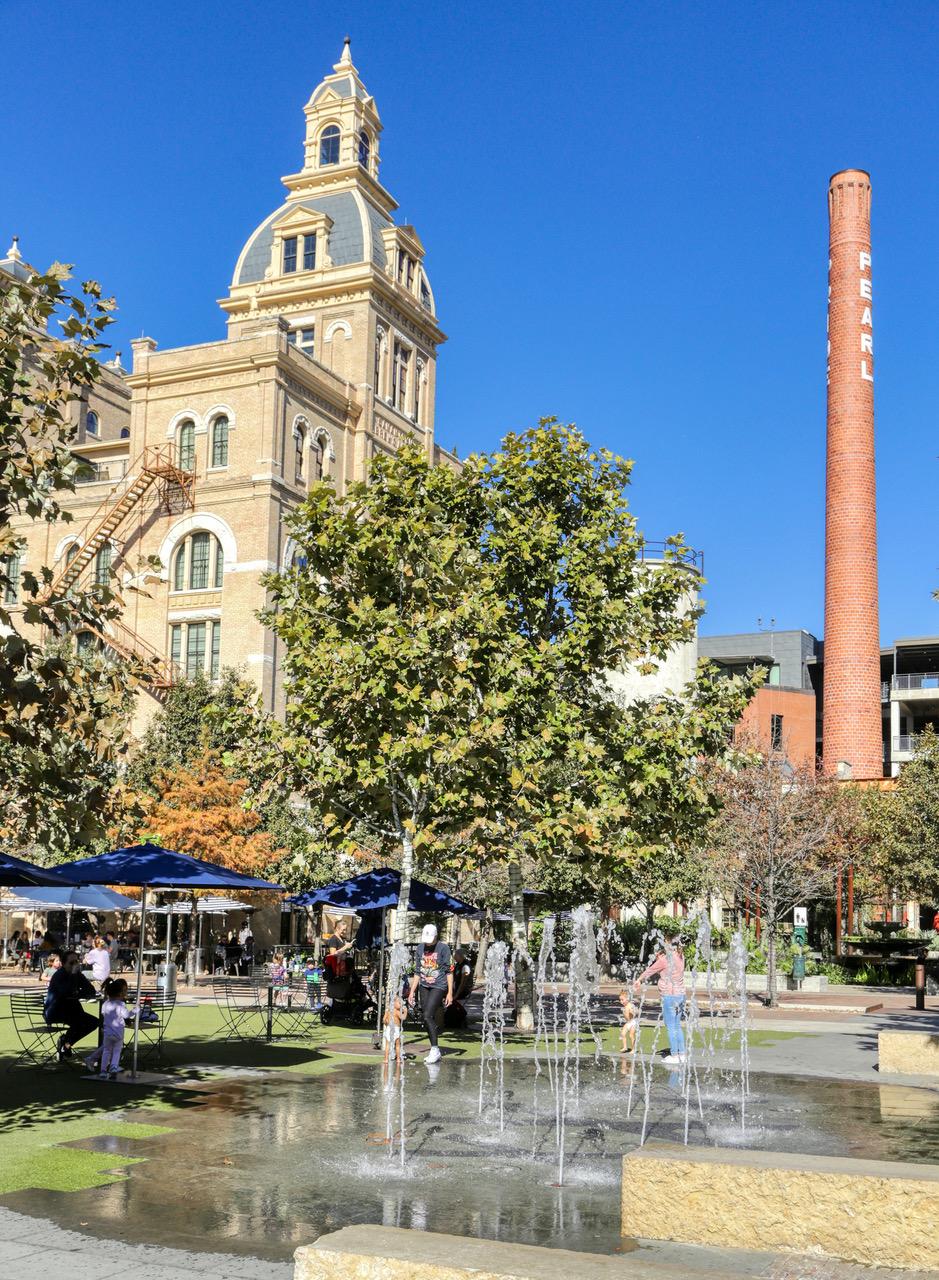 Park: A family-oriented park sits in the middle of the Pearl District complex next to several restaurants and retail outlets. The former brewhouse is seen beyond the park and remains the focal point of the district. Photo by Gary Warren/ladailypost.com

We carved out a couple of days on our recent trip to Texas to visit and enjoy the city of San Antonio. During our second morning in town, Marilyn’s brother suggested we visit the Pearl District near downtown. I am usually not too fond of driving the RV in downtown traffic, but this sounded like an exciting excursion, so we were off to the inner city.

The Pearl District is the site of the Pearl Brewing Company, a beer brewery that was started in 1883 and ran continuously through 2001. The brewery found other products and ways to stay in business during Prohibition but went back to beer the minute that era ended. However, when the last shipment of beer left the facility in 2001, the complex became a ghost town and began to deteriorate.

The Pearl is about a mile north of downtown San Antonio and occupies 22 acres that once served as the brewery. We did not really know what to expect but we were both amazed at the fine job of revitalization that was done with the property. The buildings were repurposed into a mixed-use complex consisting of residential apartments and condos, restaurants and cafes, retail space, office space, the Culinary Institute of America, an outdoor park in the center of the property and the Hotel Emma. Many festivals and events are held year-round at the Pearl District, including a weekly farmers market.

While the entire project is very impressive, I want to focus on the Hotel Emma, a boutique hotel in the center of the Pearl complex. The hotel was named for Emma Koehler who ran the Pearl Brewery after her husband and Pearl Brewery President Otto Koehler died in 1914. Emma ran the brewery until 1933 before turning the reigns to a nephew. She remained active in the brewery’s operation until her death in 1943. She is credited with saving the brewery through Prohibition and the business flourished during the era which she ran the brewery.

The Hotel Emma occupies what was the brewhouse in a building constructed in 1884 and was the tallest building in San Antonio at the time as well as other nearby buildings that were the heart of Pearl Brewing. The hotel opened in 2015 and has 146 rooms, restaurants, bar, a library, retail shops, meeting and event space and many unique details that come along with converting a brewery into a luxury hotel. The brewhouse building and the Hotel Emma remains the centerpiece of the Pearl District today.

Hotel Emma offers services similar to other higher end hotels but with a different flavor and look. The developers worked to maintain the history and integrity of the site’s past while making it a modern-day destination.

I am no expert in building design or revitalization, but the Hotel Emma is one of the most impressive works of revitalization that I have ever seen. The hotel’s lobby was an engine room, and a massive red ammonia compressor sits as a centerpiece in the lobby today and is one of many details that remind visitors of the building’s history. Off the lobby, visitors can sit and read from the hotel’s library of over 3,700 books for guests with beautiful seating areas and just beyond the library is the Sternewirth which is the bar for this prestigious hotel which also has ample sitting areas for guests as they enjoy the industrial surroundings.

Every direction you look on the main level of the Hotel Emma, industrial valves, gears, piping, and tanks are a constant reminder that this hotel space was used for over 100 years to brew beer. The history of Pearl Brewery has been artfully preserved throughout the entire Pearl District, but it is especially evident in the Hotel Emma. Much credit must be given to the city of San Antonio and the design of this “new historic district” near downtown. It saved this wonderful facility from being bull dozed and forgotten and created a destination for residents and visitors to enjoy while in San Antonio.

We were thankful for the tip to visit the Pearl District in San Antonio and were impressed with the revitalization efforts in the district. We will visit the area again when we have more time to spend at this beautiful facility near downtown San Antonio. 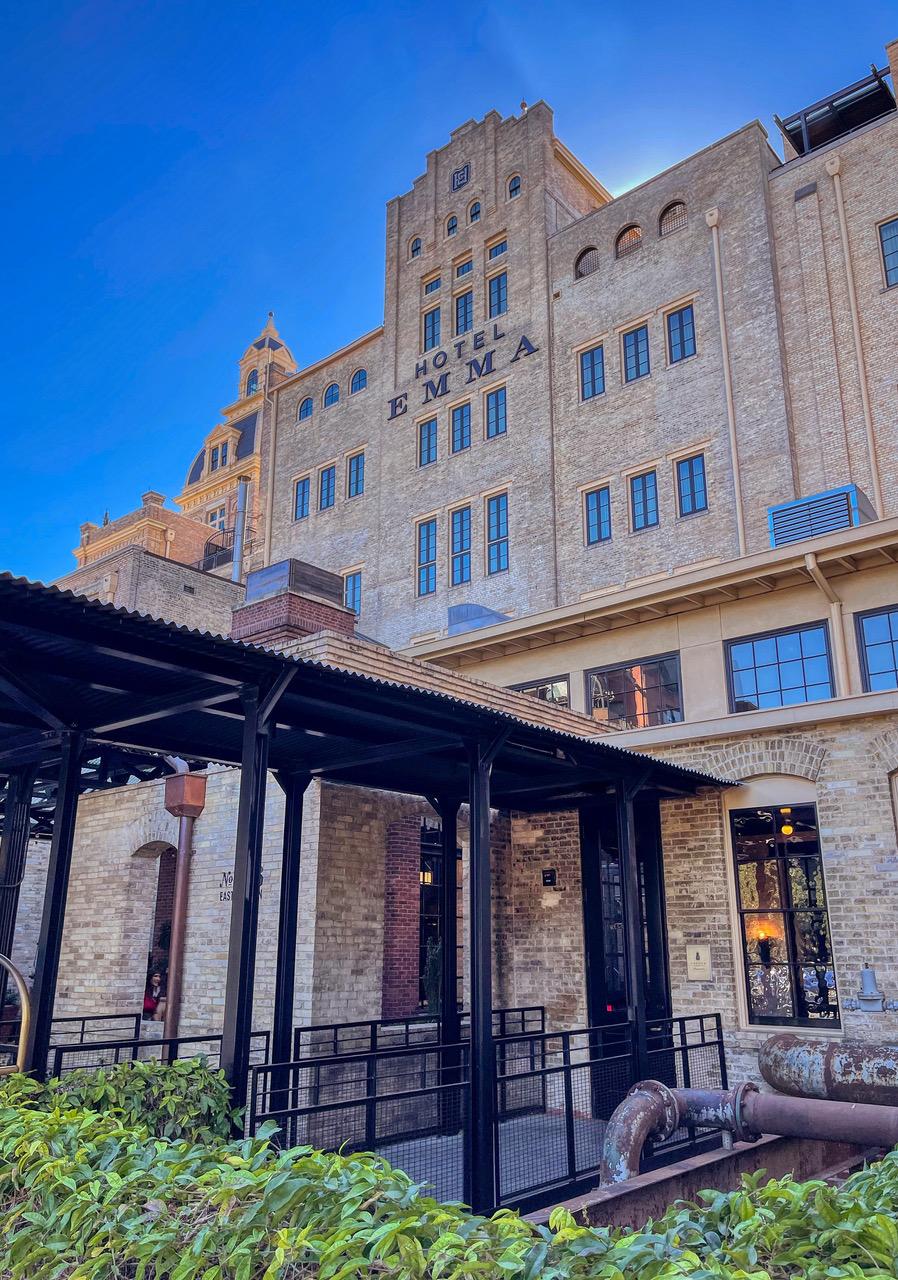 Hotel Emma: The Hotel Emma entrance is shown at the former brewhouse. The facility has been artfully restored into a luxury hotel while maintaining the industrial features of the former brewery. Photo by Gary Warren/ladailypost.com 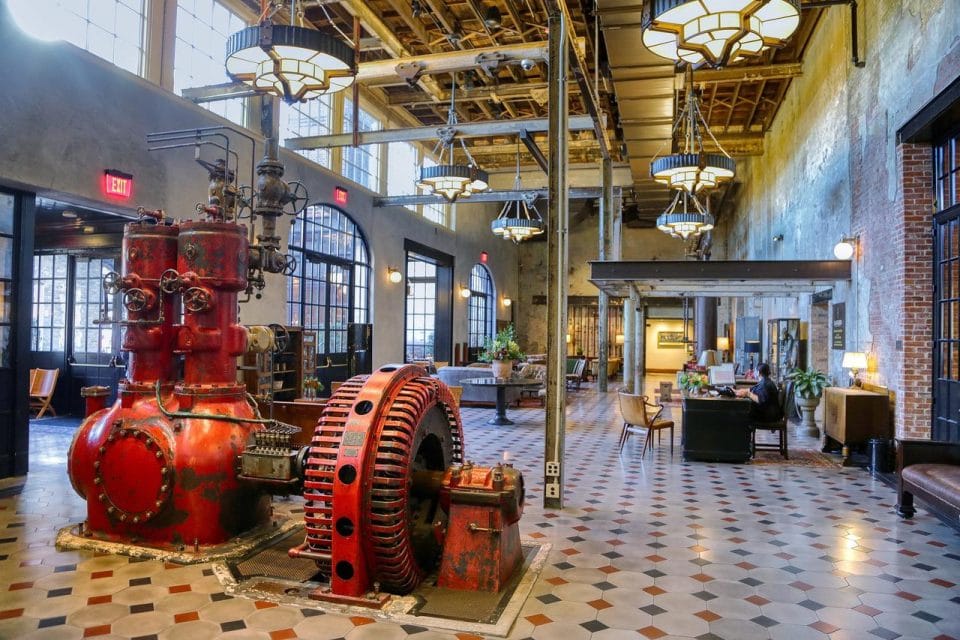 Lobby: The lobby of the Hotel Emma occupies space, which was the engine room of Pearl Brewery. Shown is a red ammonia compressor which has been retained as a reminder of the hotel’s past. Compressed ammonia was used as a coolant in the days before Freon and this compressor was used to cool the cellars at the brewery. Photo by Gary Warren/ladailypost.com 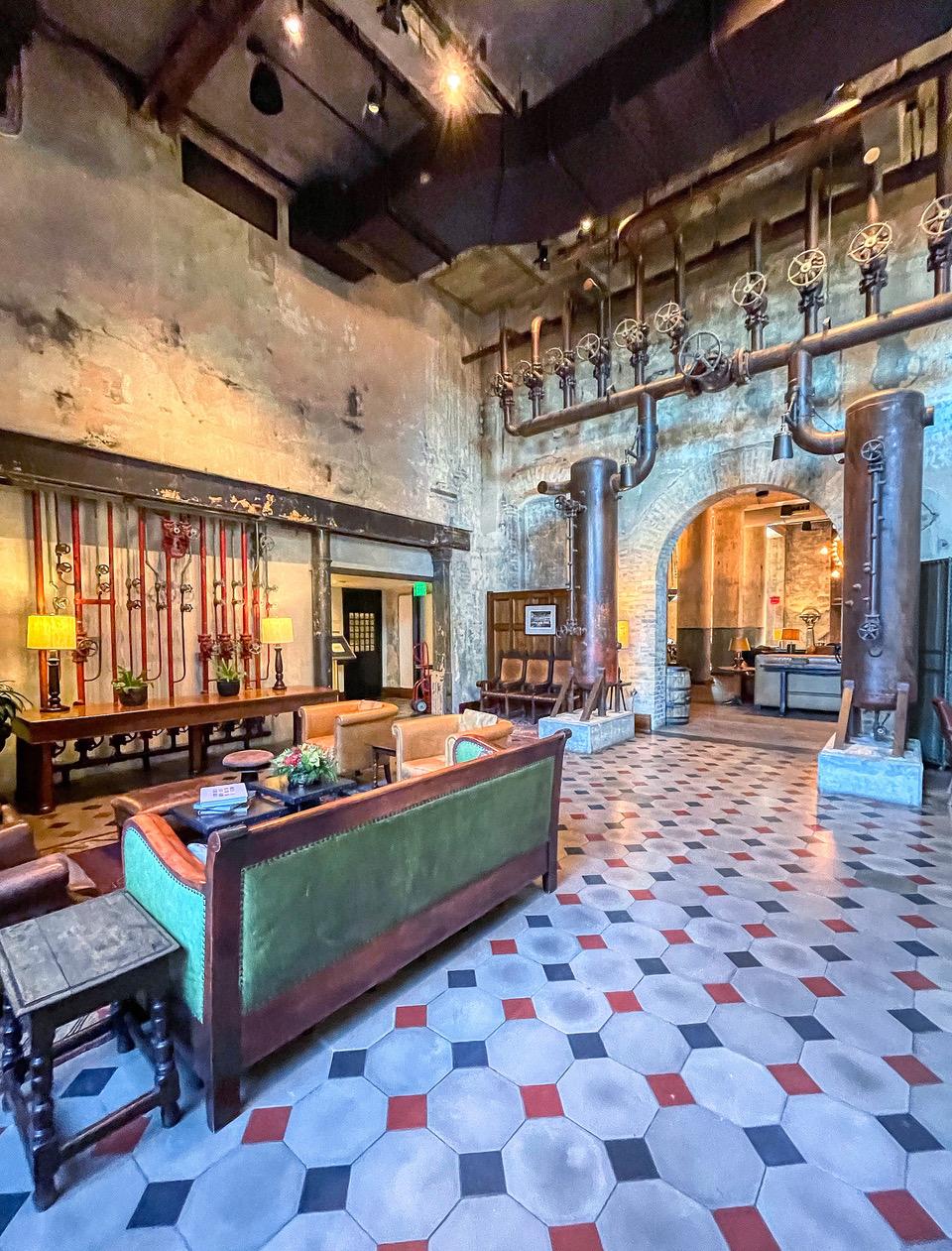 Industrial Lobby: Another area of the Hotel Emma lobby features a sitting area surrounded by industrial valves and fittings, which controlled the flow of compressed ammonia used to cool the cellars at the brewery. Just beyond this area is the entrance to the bar area of the hotel. Photo by Gary Warren/ladailypost.com 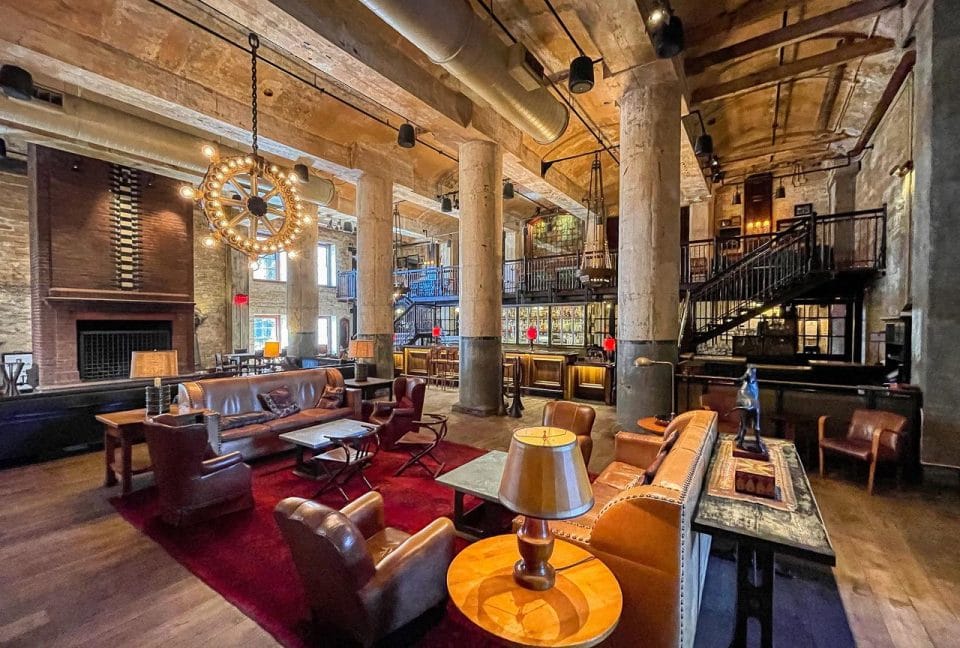 Bar: The Sternewirth is the Hotel Emma bar area. Shown is the bar and many items from the brewery days that had  been repurposed into furniture, fixtures and decorative items here and throughout the hotel. The steel catwalks have also been retained in many areas of the building and are used today to access different levels of the room. Photo by Gary Warren/ladailypost.com 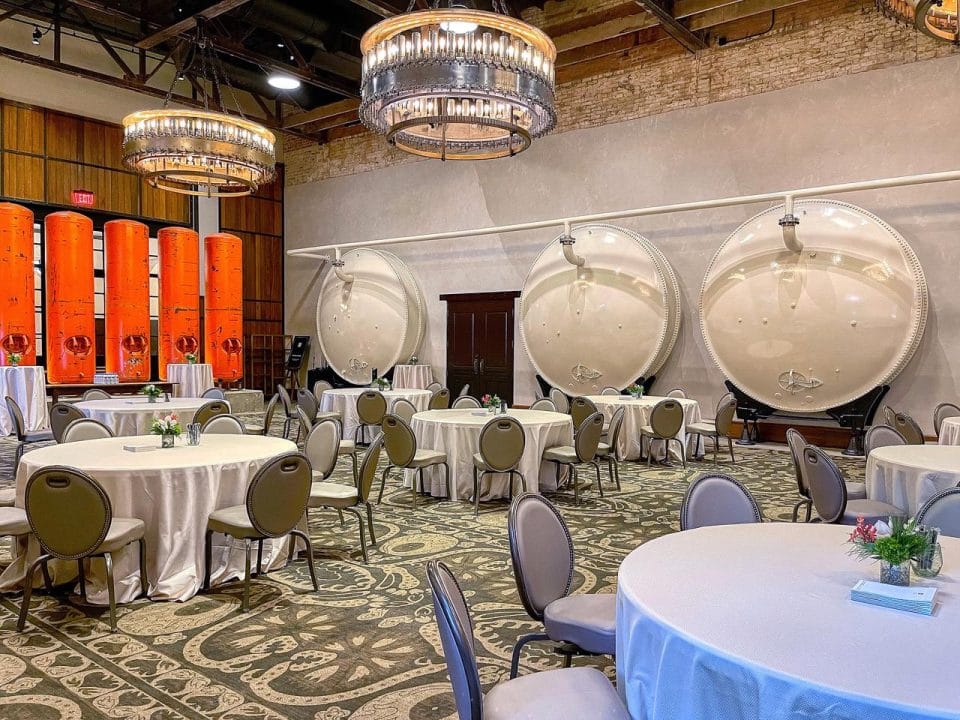 Cellar: The Elephant Cellar, as it was known, now serves as a banquet and meeting space at the Hotel Emma. The bronze chandeliers are made from parts of the old bottle filling equipment used at the brewery. The side walls of the room feature several of the brewing tanks used during the years at Pearl Brewery. The details and presentation of the old industrial features of the brewery are seen in every area of the luxury hotel today. Photo by Gary Warren/ladailypost.com