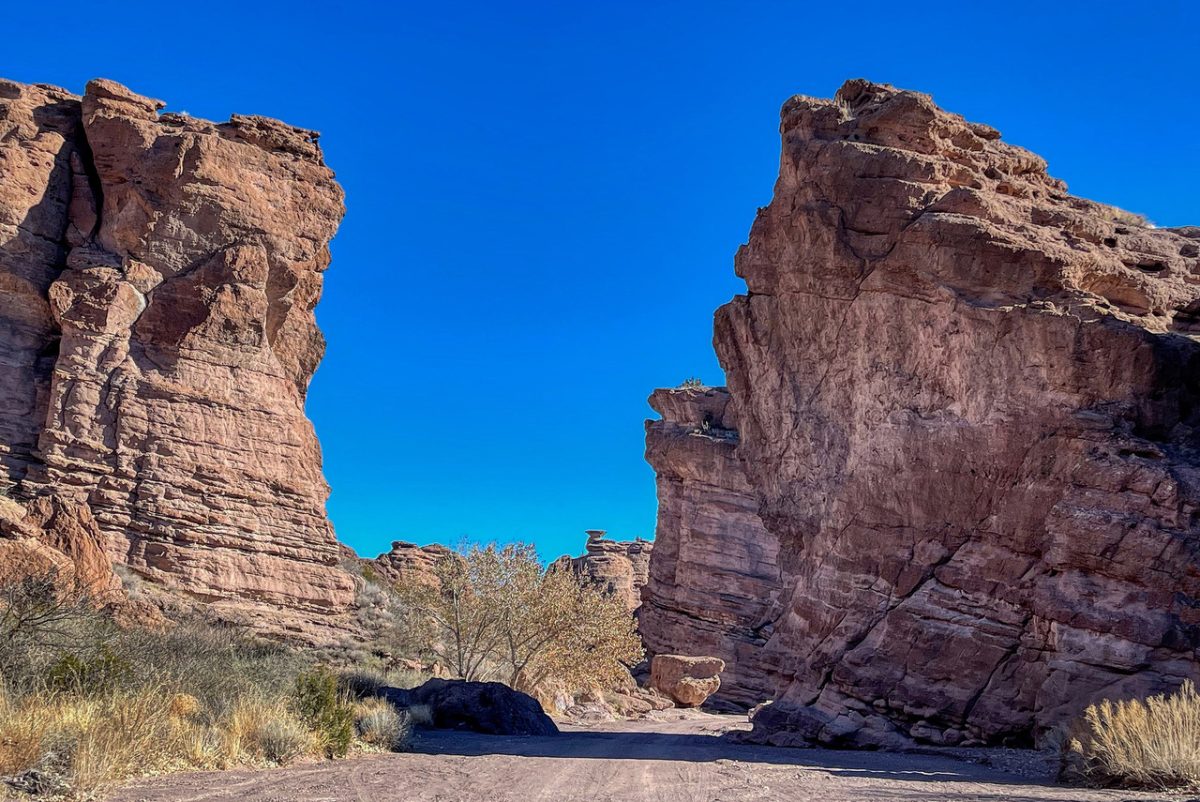 Canyon Road: A view of the road in San Lorenzo Canyon curves among the sandstone canyon walls. The walls and formations in the canyon can easily reach 100-200 feet in height. Photo by Gary Warren/ladailypost.com 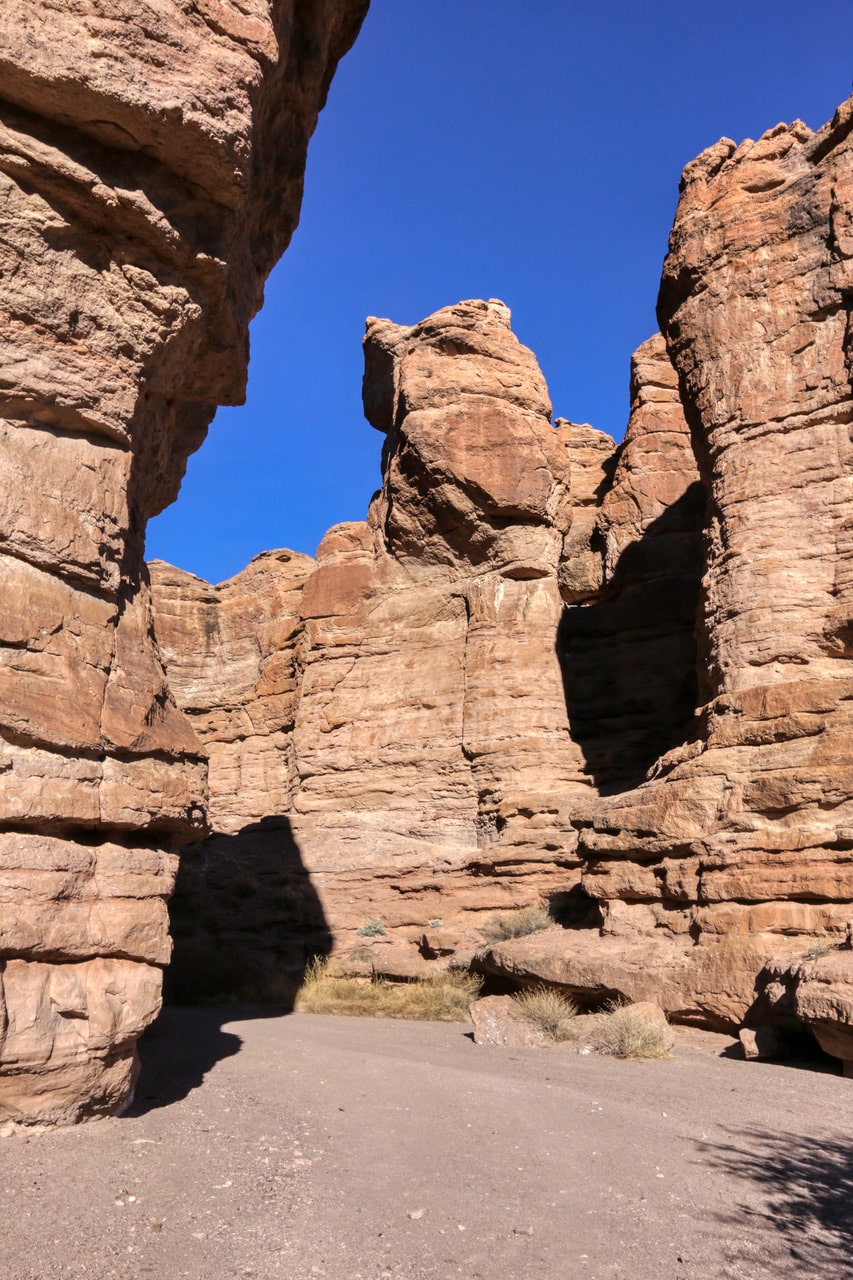 While visiting the Bosque del Apache Wildlife Refuge recently, we met Jim Gourdoux from White Rock who is also a Post From the Road reader. We began discussing various places and sites each of us have visited but he gave me a tip to a nearby location that he had visited the day before, which he thought I would enjoy, San Lorenzo Canyon.

We were leaving the Bosque later that morning so we decided to drive a few mile north to check out San Lorenzo Canyon. The canyon is a few miles west of I-25 on dirt and gravel roads. The roads were dry and maintained well enough that we drove our RV to the canyon with no issues. If the road were wet or icy, I would have thought twice about the drive.

The canyon is managed as a primitive recreation area meaning there are no facilities or services. Dispersed camping, or dry camping, is allowed but visitors must be self contained and pack it in and pack it out rules apply to campers as well as day visitors.

San Lorenzo Canyon is fairly small but it offers great hiking and photographic opportunities. Once we entered the canyon, we parked the RV and began hiking the canyon roadway allowing us to get up close to the canyon walls and formations.

The canyon is like stepping into another world compared to the surrounding area. Sandstone cliffs, mesas, hoodoos, and caves were right at our fingertips. The gravel road was flat making it an easy hike for us. There is a loop trail that leads farther into the back country but we chose to spend the afternoon exploring the canyon.

The primary trail is the roadway that runs through the canyon. There are side canyons, nooks, caves, and washes off of the main road which lead to additional beautiful and colorful geological formations.

It was a joy to stand and admire the layers and layers of sandstone that eventually form geological formations, hillsides, or canyon walls that stretch 100 to 200 feet from where I stand. When I photograph these areas, I enjoy looking at the geological details, the textures, and the colors of the formations.

We spent the afternoon gazing at the sculpted sandstone formations and canyon walls. There are photo opportunities in every direction you could look and roaming the side canyons provided additional “eye candy”. I was happy to be shooting digital photos as film and processing on these excursions would get expensive!

I would call San Lorenzo Canyon a hidden gem and certainly a great side trip if spending time at the Bosque del Apache or other nearby attractions. It is a place where one could see and visit in a couple of hours while others could spend a couple of days exploring.

If you have never seen San Lorenzo Canyon, it would make a great outing.

It is advisable to stop at the Sevilleta National Wildlife Refuge visitors center and get directions and information from the staff. That visitors center is just off of I-25 at exit 169. 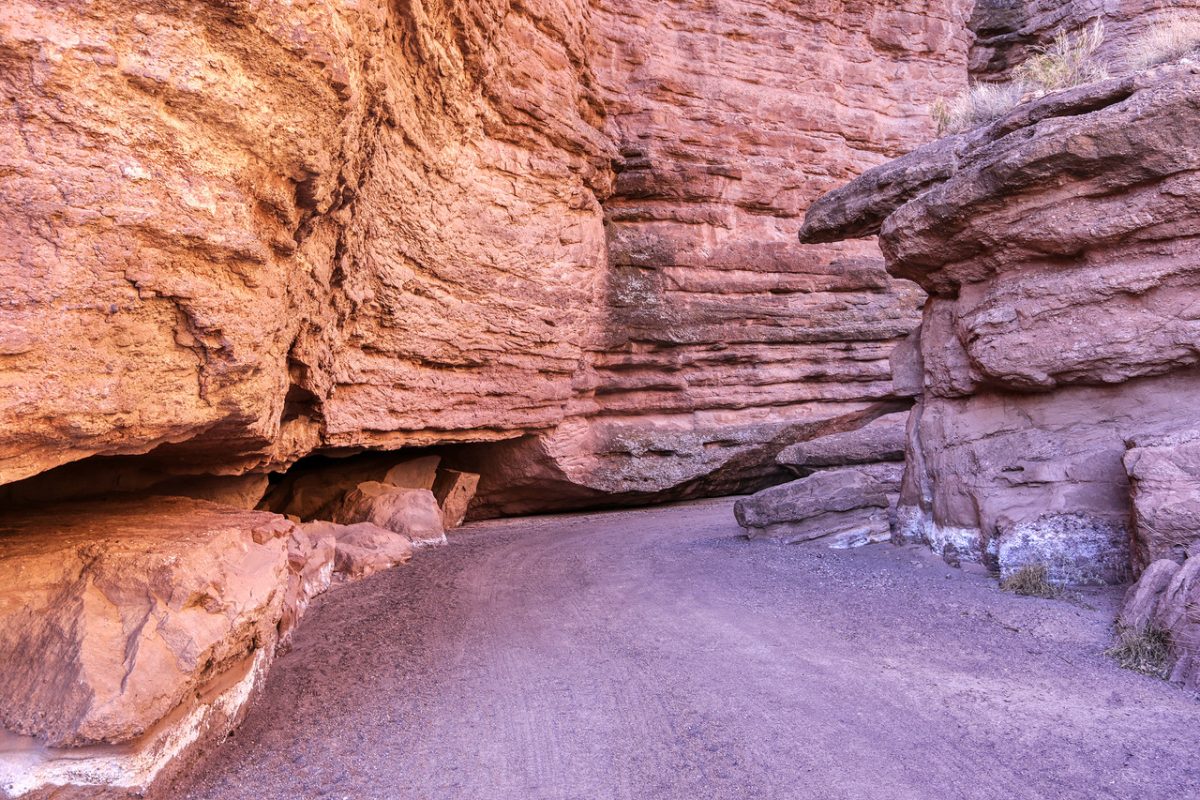 Side Canyon: There are side canyons, nooks, and cranniess all through San Lorenzo Canyon. Seen in this side canyon are the layers of sandstone, which have formed the canyon walls over thousands of years. The lighting in the canyons causes the walls to be different colors depending on the direction and amount of light that illuminate the walls. Photo by Gary Warren/ladailypost.com 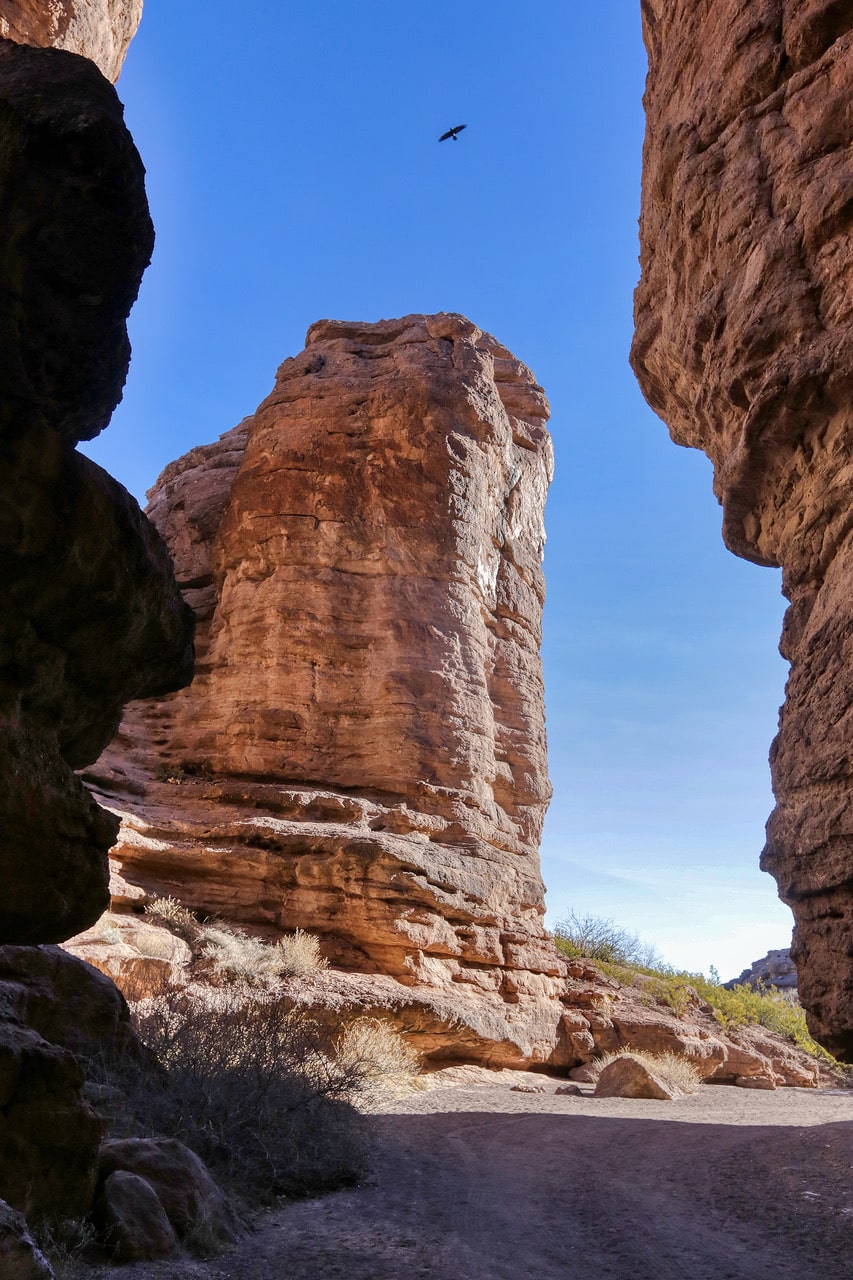 Canyon View: Shown is another side canyon looking out toward the roadway which serves as the main trail through the canyon. I call this canyon view because the wall on the left looks like the silouette of an older man as he peers from the canyon into the open space in front of him. Photo by Gary Warren/ladailypost.com 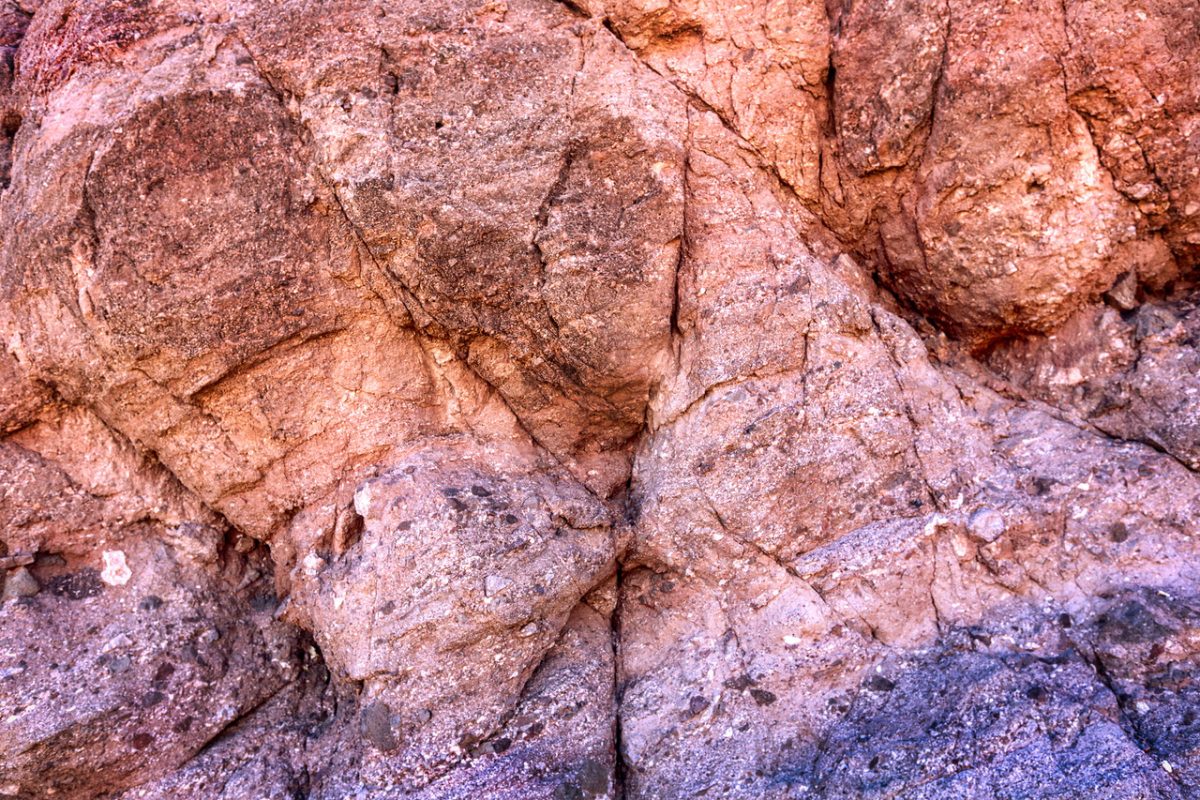 Color and Texture: Color and texture is seen on every canyon wall at San Lorenzo Canyon. The colors here vary from a rusty red to a pinkish tone tp purple in the lower right corner. The various angled striations in the wall also add to the design of this area of the canyon wall. Photo by Gary Warren/ladailypost.com 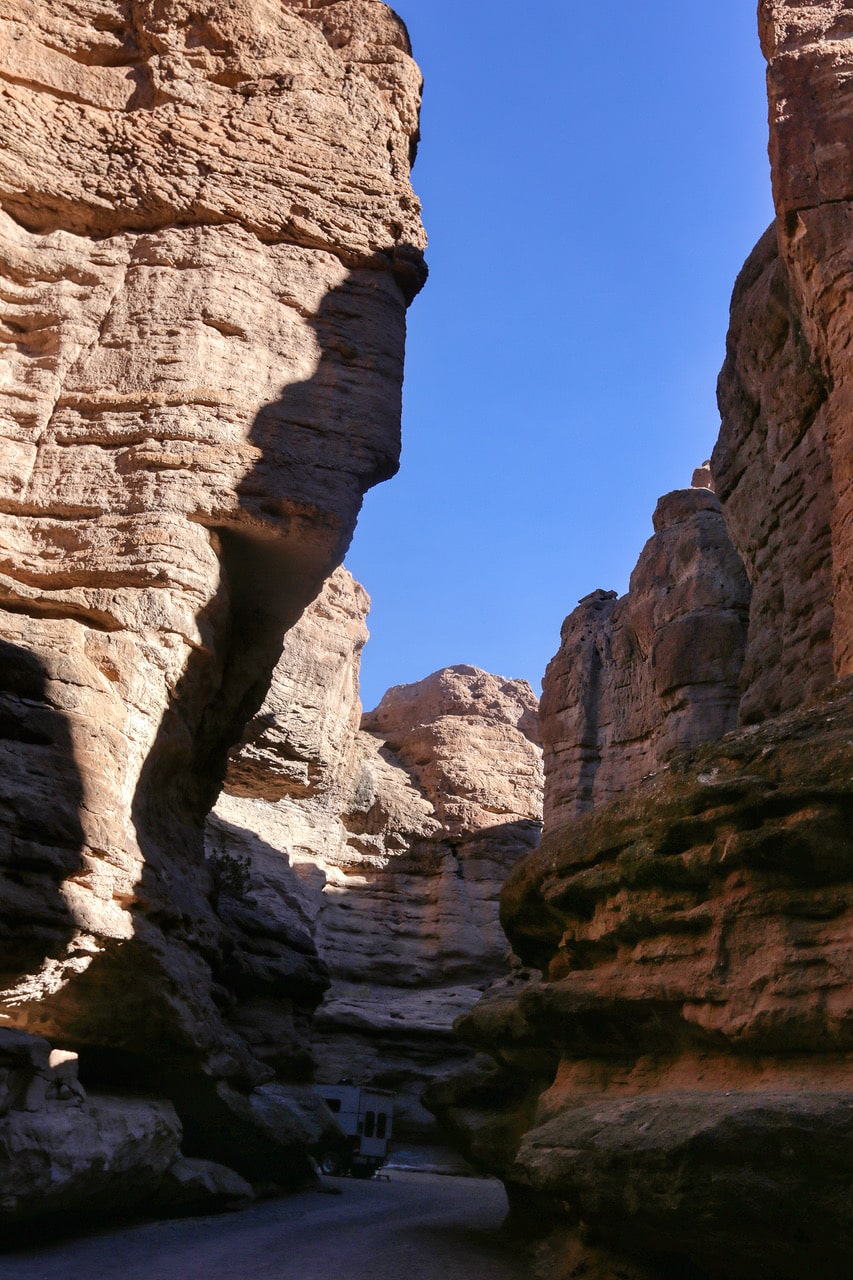 Canyon Detour: The scenes in San Lorenzo Canyon change around every curve in the canyon. Shown is a view of a side canyon as seen from the roadway in the canyon. The canyon walls seem to invite visitors to “come on in and stay awhile”. Photo by Gary Warren/ladailypost.com 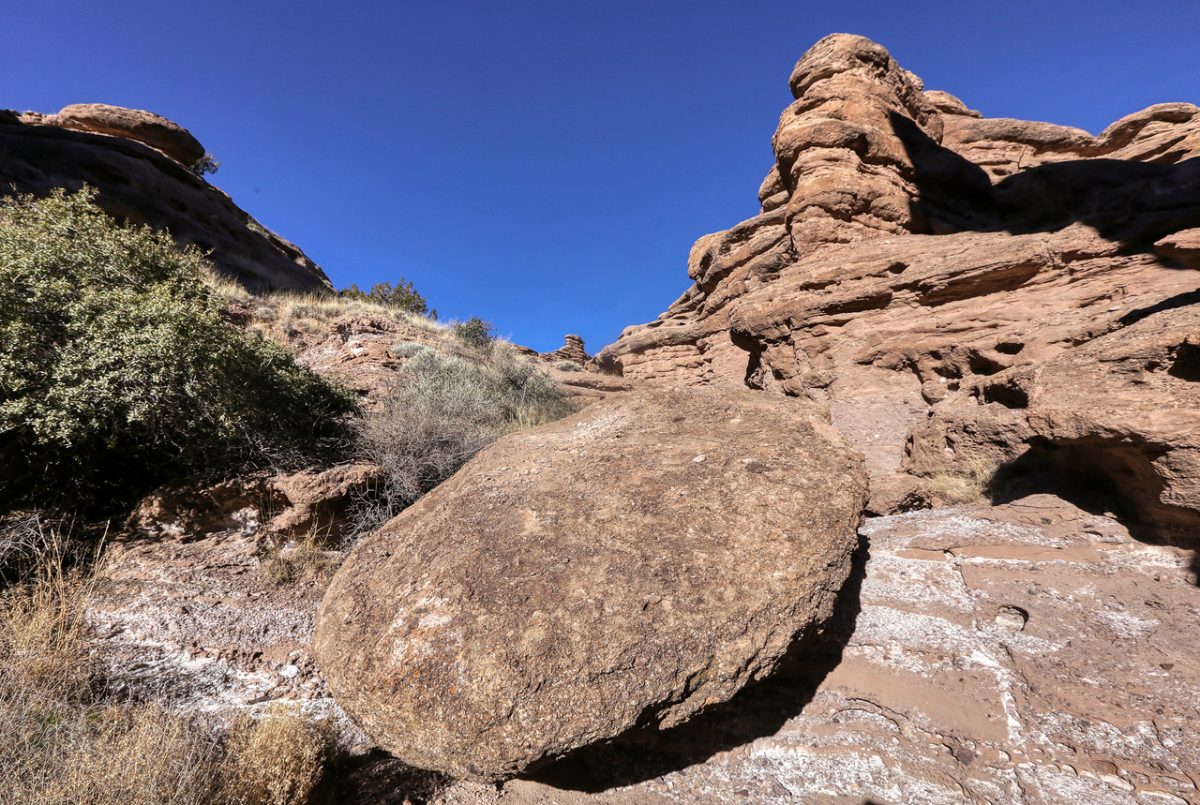 Rocky Wall: As the canyon opens up the walls become more like rocky hillsides in areas. These areas allow hikers to scramble up the hill to gain a different view and perspective from a higher elevation. Photo by Gary Warren/ladailypost.com