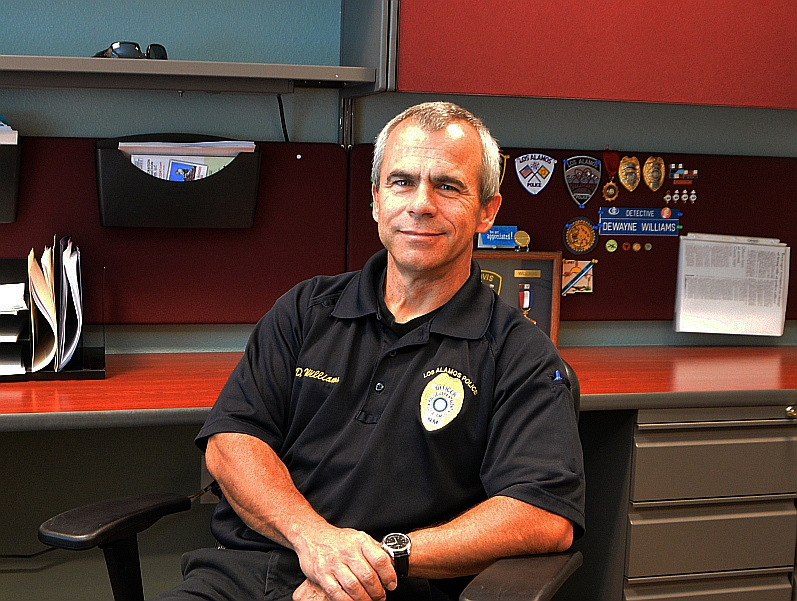 By CAROL A. CLARK
Los Alamos Daily Post
The Los Alamos Police Department is losing one of its top officers when Sgt. DeWayne Williams retires Friday.
Williams, 48, has served the Los Alamos community for nearly two decades. He is a pistol expert who taught firearms training and defensive tactics training for the department.
“I decided that it’s time to leave the department and do something else,” Williams told the Los Alamos Daily Post Friday during an interview in his office. “It will also give me the opportunity to spend more time with my family and that is something I’m really looking forward to.”
Williams was born in Carlsbad, raised in Clovis and is the first law enforcement officer in his family. While in junior high, Williams joined the Explorers group, which gave him an idea of what policing was about. After graduating from Clovis High School, Williams worked at a number of jobs including iron worker and service mechanic.
In February 1990, he went to work for the Clovis Police Department. After graduating from the Police Academy in Santa Fe, Williams worked as a patrol officer and as part of that, served two years on bicycle patrol. He recounted the day he rolled up on a man in the process of burglarizing a home.
“He was stealing a gun and shot twice at me but missed,” Williams said. “I returned fire as I dove off my bike. The guy ran down the street and was captured by other officers.”
The Clovis Police Department awarded Williams the Combat Cross for that incident.
Williams left CPD in July 1994 to join the Los Alamos Police Department. He first worked in patrol for just over a year before moving into investigations where he specialized in child abuse cases for some nine years. He co-hosted the monthly radio show “Security Matters” with Carol Clark for several years on KRSN. In 2005, Williams was promoted to sergeant and worked back in patrol for a year before heading up the investigations division.
In January 2010, Williams moved into the Professional Standards Division when the department had just six months to prepare for state accreditation. LAPD received its state accreditation in July 2010. During the last three years, Williams has been maintaining the accreditation files and the department’s policy manual as well as managing the LAPD Evidence Rroom.
“I will most miss working as a detective,” Williams said of his 24 years in law enforcement.
Williams lives in White Rock with his wife Valeria. The couple has two grown sons and a Chihuahua/Yorkie mix named Tink. Besides spending more time with family in his retirement, Williams said that he looks forward to doing more hunting and trout fishing.
Menu
LOS ALAMOS