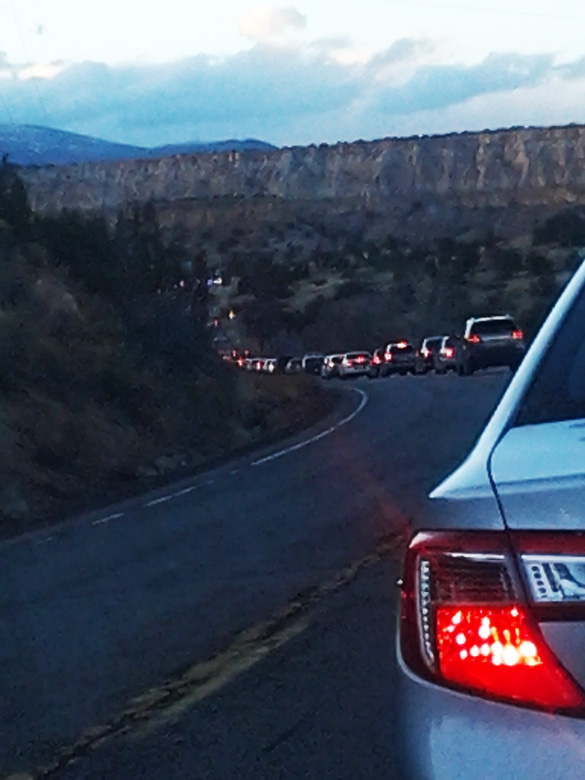 The driver hauling a moblie home Tuesday attempted a U-turn on N.M. 4 and in the process, broke two axels and wheels and the hitch attached to his trailer, causing a massive traffic backup during rush hour. Photo by Carol A. Clark/ladailypost.com

The call came in at 4:56 p.m. of a semi-truck “broke down” on N.M. 4 just south of the intersection of the Truck Route. Officers arrived within 3 minutes of the call on opposite sides of the trailer blocking both lanes of travel. The driver of the trailer had traveled down the truck route then accidently took a wrong turn toward White Rock heading south on N.M. 4. 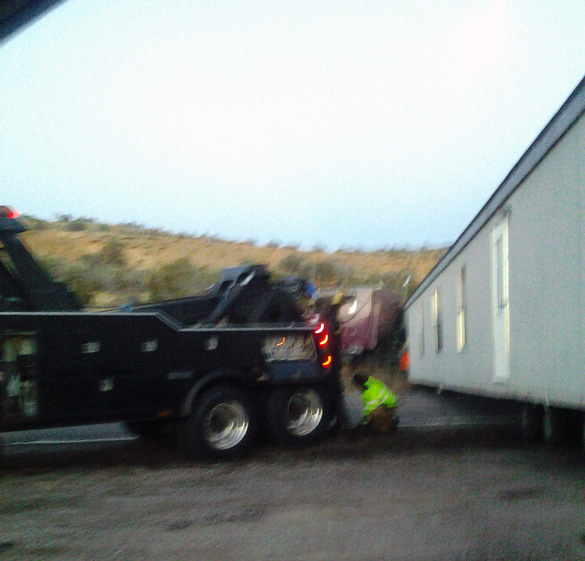 A tow truck drivers at the scene Tuesday on N.M. 4. Photo by Carol A. Clark/ladailypost.com

There was an 8-10 foot section of dirt and grass between the fence and the rear of the trailer where vehicles could pass through single file (although not large Los Alamos transit buses). LAPD officers began to alternate sending waves of traffic through the only window of passage at that point. This process was slow because vehicles with low clearance had to drive slowly due to the uneven grade of the shoulder.

Some transit bus passengers were briefly allowed to exit the large county buses on the north side of the trailer and board a bus on the south side of the roadway so we could clear the large buses so the heavy duty tow truck had more room to work.

LAPD dispatch was able to get a hold of Holmes Wrecker service at 5:08 p.m. with an estimated time of arrival of 30 minutes. An additional officer then arrived at N.M. 4 and the truck route to assist with traffic control. The wrecker requested had to be a heavy duty tow truck due to the circumstances of the trailer.

“I can understand the frustration of the drivers especially the ones who did not see the problem that was presented,” Morris said. “Although many of the ones who passed by and saw the situation thanked officers and responders of which I would like to thank them in return. Some traffic waves were allowed to go in specific directions longer than others to get the tow truck to the scene. While it may seem unfair, because drivers cannot see the whole situation due to limited visibility, it is sometimes necessary.”

The driver had obtained a permit to haul the mobile home and police cited him for the incident.

Drivers with concerns about this incidnet should call Morris at 505.662.8281. 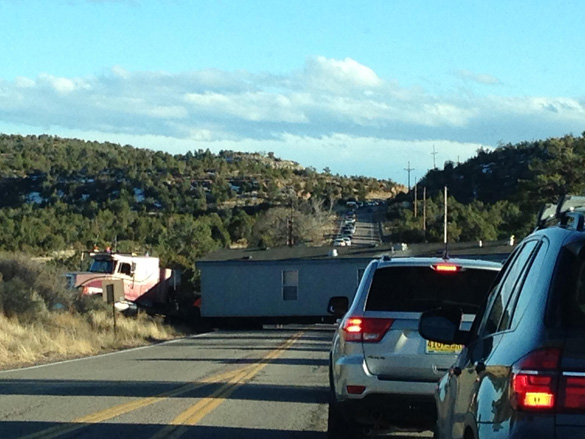