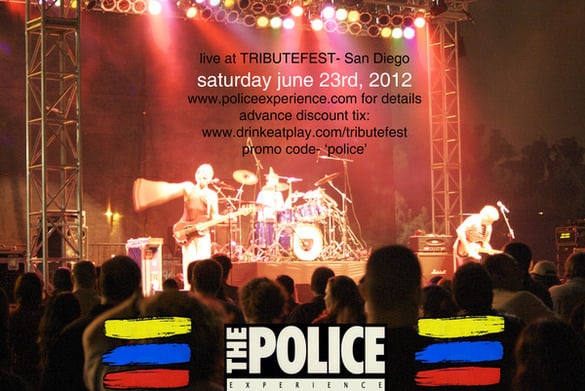 This Friday night, 7 p.m., Ashley Pond, we’ll be paying a tribute to the Rock & Roll Hall of Fame band, the Police.

The incredible drummer for the Police, Stewart Copeland says “…every nuance, all the drum parts, and the singer has Sting down to a tee…”

Check out the Police Experience on www.policeexperience.com or on youtube and you’ll agree with Miles Copeland, (the manager of the Police) who says “… close your eyes and it’s my boys…”

Taylor Hawkins, the drummer for the Foo Fighters, has sat in with the P.E. a number of times and tells the story of the first time he jammed with them in 2009.

Don’t forget that Taylor knows “foo” when he sees it and also grew up listening to and loving the Police.

Taylor says “… all of the sudden I was transported back to 1983 … they knew every Police song perfectly … it might have been the awesomest, funnest, most musically satisfying experience … this guy David Rasner ( the lead singer) sounds exactly like Sting.

The Police Experience concert is gonna be one of our best shows of this year. You’ll be amazed. They’ll sing songs like “Roxanne,” “Walking OnThe Moon,” “Every Breath You Take,” and “Don’t Stand So Close To Me.”

If you’re a Police fan, you’ll love every song in the almost three hour concert.

If you’re not a big Police fan, you’ll still love the energy of a great rock band.

Friday night, also at the Pond, beginning at 6 p.m. will be the opening ceremony for “Relay For Life,” the annual fundraiser for the American Cancer Society.

At 6:30 p.m., there’s the survivor’s lap, a luminaria ceremony starts at 9 p.m., It’ll be a beautiful and emotional evening filled with rock & roll.

Here’s a rock story for you. Last year for this event, we had the Scottish band, Old Blind Dogs.

It was a great concert and very appropriately mellow. I asked the band’s piper to please make the finale a gorgeous Scottish tune such as “Danny Boy.”

On Friday, July 22 we’ll be back at Ashley Pond with the iconic rock, country and blues Texan, Guy Forsyth.

You really don’t want to miss this concert either. Tell your family and friends to come.