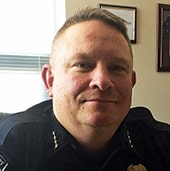 Los Alamos Police Chief Dino Sgambellone responded Tuesday to allegations that not all violent crime reported to the New Mexico Department of Public Safety (NMDPS) appears in the LAPD 2016 and 2017 annual crime reports presented to the Los Alamos County Council.

The allegations have been made by James Whitehead, Republican nominee for Los Alamos County Sheriff in the November general election, both in person at primary election events and now on his campaign website under the caption “The Truth About Violent Crime in Los Alamos”.

“Like many of us, I believed that I lived in the Safest City in America. The fact is this is simply not true,” Whitehead states on his website. “The question that you are probably asking is, ‘How can this be? We receive the same report that is presented to County Council each year’. Well, I have looked at these reports and compared them to the reports provided to the Department of Public Safety, a state entity, and the numbers just don’t match.”

Whitehead said just to be clear, he is not talking about minor errors “such as 7s that look like 9s”.

“I am talking about the indisputable fact that only 66 percent of the violent crime reported to the NMDPS by LAPD appears in the 2016 Annual Crime Report presented to County Council and only 83 percent in 2017. Why is there a difference in these reports? I have spoken with DPS staff and they are confident in their numbers,” he said.

Calls and emails to Whitehead are being returned by his campaign manager, Todd Hathorne who stated that the sources used for the allegations were simple.

“We used data presented to the Los Alamos County Council and data provided by the New Mexico Department of Public Safety,” Hathorne said in an email.

Sgambellone responded to Whitehead May 21 telling him that the forms Whitehead sent him are for monthly crimes known to police, not UCR forms, and explained that simply adding numbers on those forms versus what is reportable UCR activity are two separate functions. He told Whitehead he was including a UCR handbook so that he might gain a proper understanding of what the UCR program is and how various incidents are defined and reported.

He said UCR deals with the violent crimes of homicide, manslaughter, rape, aggravated assault and robbery and then larceny, burglary, arson and motor vehicle theft.

“So, a lot of people are interested in drugs or domestic violence statistics and we certainly can and do keep that type of data but in reporting out, what you typically do is report UCR because that’s what the standard is,” Sgambellone said.

He explained that UCR is designed by the federal government and is affected by the differences in the definition of crimes from state to state.

“Here in New Mexico if I punch someone it’s a battery charge whereas in some other states that’s an assault. So, what UCR did to try and account for all those differences from state to state was to define what they’re trying to get at in the UCR handbook. The handbook will for example give you a definition for aggravated assault that says either the injury was substantial or there was a weapon involved. So, two people fist-fighting in a bar, nobody gets anything broken that’s an assault here in New Mexico but it’s not a Part 1 UCR crime. If during the fight one guy pulls out a knife and stabs the other guy, he just elevated the incident to an aggravated assault, which is a Part 1 crime,” Sgambellone explained.

He said the form submitted to the state is not a strict UCR reporting form. For example, the form does not include arson, which is a reportable crime. Also, the form includes simple assault (not aggravated) numbers, which do not get reported under UCR.

“My numbers are accurate for what UCR requires me to report to. The report Mr. Whitehead sent me is not the UCR report. It is the “Monthly Return Of Offenses Known To Police”. Yes, there are UCR crimes on there but it is not the UCR report. I did contact the state to ensure they were aware of how reporting numbers based on that form could confuse someone not familiar with UCR,” Sgambellone said.

He explained that the report he sends to the state changes on an ongoing basis due to the time lapse.

“Take for example a case we had of an aggravated robbery at an ATM, which come to find out was a drug deal gone bad. It may take a while to figure all that out so eventually that aggravated robbery score is going to go away once it’s determined to be unfounded. It could be months later by the time we find that out,” he said. “Another example would be the hierarchy rule, which only scores some criminal activity as one even if multiple crimes have occurred at the same place and time. That’s another limitation but that’s the rule. If somebody breaks into 20 cars at the Lemon Lot tonight, it’s one location and one occurrence with multiple cars so it would be scored as one crime for UCR. On this report each crime would be shown individually because it’s simply “offenses known to police” but in UCR that’s the rule so we count it as one.”

Sgambellone said each quarter the Part 1 crimes are tabulated and at the end of the year put into his annual report. He said the Department will have done a UCR reconciliation by the end of January or February so there can even be a slight difference then to the end of the year numbers if for example there are additional cases that have been determined to be unfounded. He said every month he and his staff go through the data to verify it and again at the end of the year.

“That’s why I know my numbers are right. LAPD takes pride in thoroughly and accurately reporting and analyzing our data. We are a nationally accredited department and our reporting methods were examined and scrutinized during the accreditation process. It’s unclear what Mr. Whitehead’s intent is here as we have not spoken in person and I have not heard back from him since I provided him with the UCR handbook last month,” Sgambellone said.

Sgambellone added, “I’m surprised Mr. Whitehead posted the inaccurate information on his website after I provided him with the information he requested. Perhaps Mr. Whitehead still struggles understanding the UCR process. As with any citizen, I would be happy to sit down with him and explain it.”

The Los Alamos Daily Post reached out to Whitehead Tuesday evening and received a response from his campaign manager.

“The campaign confirms receipt of the handbook delivered by the chief to Mr. Whitehead. We also acknowledge a single email from the chief. We are reticent to call the issue of differences in reporting ‘allegations’. We are working on comparisons of what the chief has actually said to the governing body. We would, of course, suggest you research the statistics as published by the Department of Public Safety. We covet independent third party verification. It’s the kind of principle that keeps everyone honest,” Hawthorne responded.