Los Alamos Police Sgt. Jeff Regenold, left, and Commander Jason Wardlow Herrera question Jesus Velazco at Ashley Pond Park Friday afternoon after the suspect called 911 to report that he had a gun and was headed to the park. Photo by Carol A. Clark.ladailypost.com

Los Alamos Police Commander Jason Wardlow Herrera checked the jacket of Jesus Velazco for a gun at Ashley Pond Park Friday after the suspect called 911 to say he had a gun and “no one is going to take me in when I let my dog off leash.” Photo by Carol A. Clark.ladailypost.com 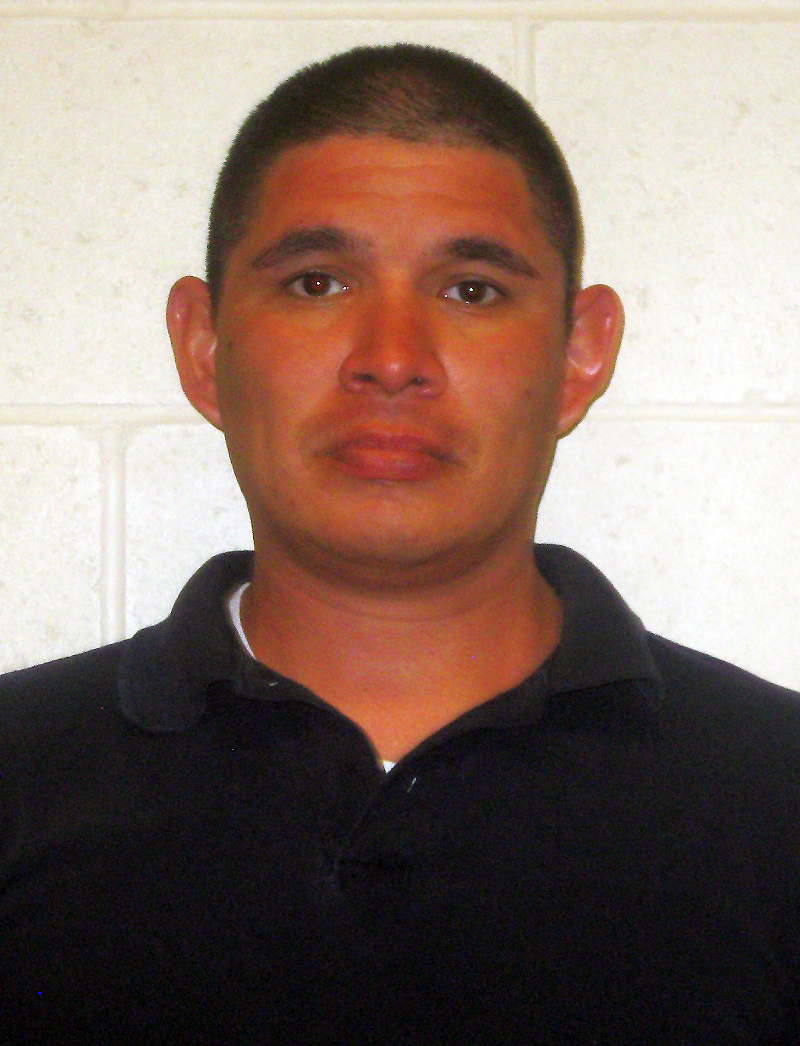 Threats to fight everyone in sight were flying from suspect Jesus Antonio Velazco Friday afternoon at Ashley Pond Park.

Velazco, 40, was arrested at the scene and charged with intoxication, violating his probation and threatening that he had a gun.

Velazco had called the Los Alamos Police Department Emergency Dispatch Center at about 1:39 p.m., Friday saying that he was enroute to the Ashley Pond area to walk his dog.

He advised dispatch that he had a gun and said that no one was going to take him in when he let his dog off leash, according to the LAPD Incident/Investigation Report.

Los Alamos Police Officers remained calm and patient with Velazco who frequently pointed his finger at the officers and invited them to fight.

Commander Preston Ballew was first to arrive at the scene. According to the report, Ballew observed Velazco and stated that when Velazco saw him, he came towards Ballew saying he did not have a gun on him and that the gun he did have, had been dropped off the bridge.

A search of the area where Velazco said the gun had been dropped off was conducted by police officers but the gun was not found, according to the report.

Velazco made numerous statements to the officers who arrived at Ashley Pond Park that he wanted to fight “the best officers” and that no one was going to take him in.

He advised the officers many times that he was a former law enforcement officer trained to fight.

“I arrived on scene and Velazco advised that he had been drinking alcohol and that he was now drunk,” stated Sgt. Jeff Regenold in the report. “Commander (Jason Wardlow) Herrera went to Magistrate Court where Judge (Pat) Casados advised Velazco was in violation of the conditions of his probation for drinking alcohol and that she would issue a bench warrant for his arrest.”

Each time Velazco became combative, the officers attempted to distract him by changing the subject. Ballew complimented his dog, saying it was very handsome and asking his name, which appeared to calm the man down for a while until Wardlow Herrera returned back to the scene with a warrant in hand.

He advised Velazco of the warrant and Velazco began yelling and started moving away. The officers gathered around Velazco and walked along with him.

As Velazco came near the edge of the park toward the Los Alamos Detention Center parking lot, he stopped and the officers handcuffed him without much problem.

At the same time, Deputy Chief Randy Foster reached for the leash of Velazco’s dog Otis and walked him several feet away. Otis appeared fairly calm and was later taken to the County Animal Shelter.

Due to Velazco`s intoxication, Los Alamos Fire Department EMTs were called to check him out and he was transported to Los Alamos Medical Center for evaluation.

Velazco is in jail and his warrant has a “hold with no bond” provision.

According to police reports, Velazco has been in Los Alamos for about a year, staying with his mother at her home in the La Mesa Mobile Home Park off San Ildephonso Road.

He does not have a job and has had other arrests since arriving in town. At 3:01 p.m., Sept. 8, 2012, police arrested him on San Ildephonso Road and charged him with DWI. He was placed on supervised probation.

At 2 p.m., Nov. 5, 2012, police responded to the Probation Office in the Justice Center. Velasco had violated the supervised conditions of his release from his DWI.

The probation officer informed police that Velazco was under the influence of alcohol and had blown a blood alcohol content of .106. Velazco was charged with violating his probation, arrested and taken to jail.

He also was taken to LAMC Jan. 24 after a family member called police for help, reporting that Velazco was intoxicated and acting unruly at home.

Jesus Velazco challenges Sgt. Jeff Regenold to duke it out saying he is a former law enforcement officer trained to fight and he can take on the best that LAPD has to offer. Photo by Carol A. Clark/ladailypost.com

Police follow along with suspect Jesus Velazco and his dog Otis until he nears the jail where they arrest him Friday for violating his probation. Photo by Carol A. Clark/ladailypost.com

Deputy Police Chief Randy Foster leads Otis away as his owner, Jesus Velazco, is arrested Friday near the jail. Photo by Carol A. Clark/ladailypost.com