It is with great respect for the people of this state that I feel I must speak up.

I miss the days of truth in advertising. It is amazing to me that PNM gets away with the outrageous claims they make in their full-scale PR assault on the good people of New Mexico.

Every time we see a PNM advertisement these days, it is full of half-truths and exaggerated statistics.

“More Sol. Less Coal” is PNM’s latest spin in their “green” campaign, but what they aren’t telling you is that PNM is in fact adding more coal and barely scratching the surface in their adoption of “Sol”. 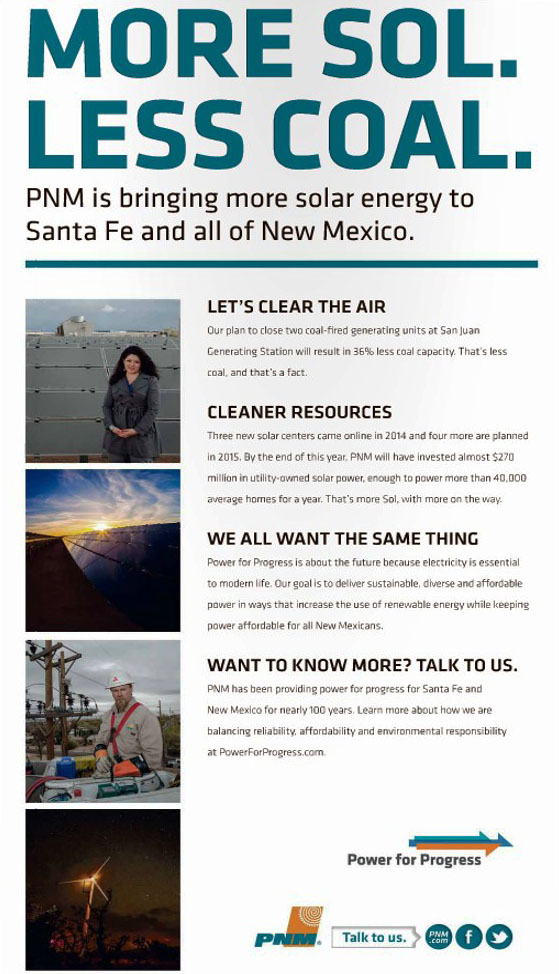 Here is the truth:

That means that PNM wants to fine anyone who chooses to invest their hard-earned money in a solar electric system that is tied to their grid after this year. If the PRC approves this tax, solar electric adoption and development in our state that boasts more than 310 days of sunshine annually will come to a screeching halt.

If, in fact, PNM is claiming to be working towards reliability and affordability in an environmentally responsible manner, they would not be proposing to tax solar consumers. Also buried in their plan for more “Sol” is the fact that they plan to “sunset the banking option for new [distributed generation] customers,”2 replacing it with monthly payments for excess energy that is produced.

This will significantly impact the financial payback on the solar installation. Once again, PNM is putting their shareholders above their ratepayers. PNM already profits from residential and small commercial solar producers as they are actually producing clean, efficient power for their neighbors and generating cash for PNM.

Solar producers create energy for PNM at no capital cost to PNM. PNM then purchases excess energy from residential solar customers at about 3¢, the wholesale rate, and sells it to neighboring residents at 9¢, the retail rate.

You tell me – who is the winner in that math equation?

Arguments related to the antiquated notion that solar producers are not paying their fair share have fallen flat in other states around the country. What’s more, our PRC should order a comprehensive study on the true economic and environmental benefits of distributed generation and renewable energy vs. fossil fuels on our grid before handing over ratepayers’ hard-earned money to PNM.

Let’s do this together, New Mexico. Tell the PRC (http://petitions.moveon.org/sign/i-oppose-pnms-replacement?source=c.em&r_by=8731784) that you oppose PNM’s replacement power plan.