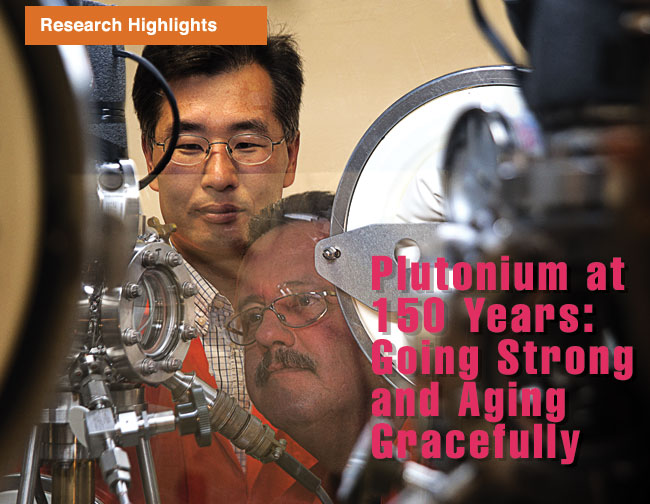 Livermore chemist Brandon Chung, left, and mechanical technologist Kenneth Lema peer through a glovebox to check the setup on the dilatometer that measures the dimensions of plutonium samples. Courtesy/S&TR

PLANNING the future needs of the U.S. nuclear weapons stockpile as well as the nuclear weapons complex depends in part on maintaining confidence in the long-term stability of the pit, or core, of plutonium-239 residing inside every weapon.

Scientists and engineers who ensure the safety and reliability of the nation’s stockpile had long been concerned that the damage accumulated over decades as plutonium-239 self-irradiates could eventually compromise weapon performance.

In 1997, the National Nuclear Security Administration (NNSA) launched a comprehensive study at Lawrence Livermore and Los Alamos national laboratories to examine in detail how plutonium pits age and provide a firmer scientific basis for estimating the service life of these components.

The study’s results, announced in late 2006, showed that the slow degradation of plutonium in U.S. nuclear weapons would not affect warhead reliability for decades.

Independent research teams at the two laboratories performed extensive mechanical testing and laboratory-based experiments on aged samples of a plutonium-239 alloy—plutonium mixed with a small amount of gallium to stabilize the material in its delta phase at room temperature.

Alloy samples were taken from 15- to 44-year-old plutonium pits and from plutonium that was artificially aged to 65 years. These tests showed no significant changes in important physical properties such as density and strength. In analyzing the test results, the research teams determined that the minimum lifetime for plutonium pits was at least 85 years—25 to 40 years longer than previously estimated.

“The 2006 report was a work in progress,” says chemist Pat Allen, the deputy program leader for enhanced surveillance and leader of the plutonium aging study. “The 2006 report and recent work continue to show no alarming trends and serve to validate our theories about how plutonium ages.

However, we need to keep running tests on naturally aged specimens to see further into the future and make sure there are no surprises.” Allen says that ongoing monitoring of the accelerated alloys is useful to establish the location of any aging “cliff,” where changes would severely affect performance, even if the cliff
did not occur in the near term.

Bruce Goodwin, principal associate director for Weapons and Complex Integration, says he is “extremely pleased” at the continuing positive results. “Both the original study by Livermore and Los Alamos and the ongoing long-term study by Livermore represent a tour-de-force accomplishment for stockpile stewardship.” The results, he says, are highly positive for the safety and reliability of the stockpile and for avoiding the costs associated with remanufacturing pits.

“The article in Science and Technology Review summarizing Livermore’s plutonium aging study, along with an earlier study at Los Alamos, re-affirms the DOE decision not to build a large-capacity ‘Modern Pit Facility’ and instead pursue a limited manufacturing capability in existing and planned facilities at Los Alamos. A continued limited manufacturing capability is essential as noted in the article.

“It’s important to note that this study of plutonium aging is only one area of many that could determine pit lifetimes. Extending the observations from plutonium aging as representative of pit lifetimes neglects to take into consideration all of the other factors and could be easily misunderstood.”