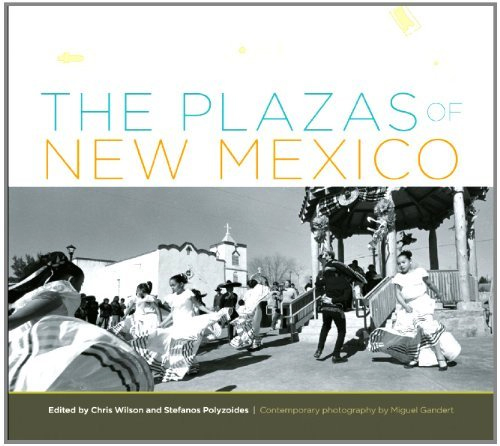 The “Plazas of New Mexico Exhibit” Opening Reception is set for 2:30 p.m. in the Upstairs Art Gallery at Mesa Public Library.

The Plazas of New Mexico: a Book & Exhibit from the Historic Preservation and Regionalism Program at the School of Architecture and Planning, UNM, Albuquerque, runs through Jan. 11, 2013.

Mesa Public Library is offering a lively Sunday afternoon of events as part of the downtown Los Alamos Winterfest Celebration.

A brand new exhibition, The Plazas of New Mexico, will open in conjunction with a talk by the author of the book of the same title, Chris Wilson of the University of New Mexico and architect José Zelaya, contributor to the book.

The Plazas of New Mexicodocuments the rich heritage of New Mexico’s public plazas, and the everyday life and community celebrations that help sustain them.

It traces three distinct design traditions—the Native American center place with kiva and terraced residential blocks, the Hispanic plaza with church and courtyard houses and the Anglo square with courthouse and business blocks.

New Mexico’s plazas, like urban spaces everywhere, are gaining renewed attention at a time when the challenges of sustainability have sparked the New Urbanism and Smart Growth movements, urban revitalization, and intensified interest in historic preservation.

The Plazas of New Mexico is about the past but for the future. Plaza site plans, elevation drawings, bird’s-eye views, concise community histories, vivid historic photos, and compelling documentary photographs bring to life the history, physical setting, and social life of 22 communities.

Contributors include a distinguished array of historians, architects, and preservationists, an anthropologist, a geographer and a planner.

The book is valuable for community leaders, politicians, designers, planners, and developers facing similar issues elsewhere in the country and the world.

But even where the climate or mixture of cultures is significantly different, The Plazas of New Mexico provides a model for other studies of urban design tradition and practice.

The result is a landmark study of these historic plazas and their 1,000-year history.

About the book contributors:

J. B. Jackson Professor of Cultural Landscape Studies at the UNM School of Architecture and Planning in Albuquerque, and founding director of its Historic Preservation and Regionalism Program, Chris Wilson has written widely on architecture, tourism and the politics of culture in the Southwest, and on cultural landscape studies. His current focus is on the role of the on-going reurbanization of the U.S. as a central sustainability strategy.

Chris Wilson holds an M.A. from UNM in Art History, specialization in American Architectural History and a B.A. from Yale University in Philosophy and Psychology.

Honduran architect and urbanist José Zelaya has designed a broad variety of architectural and town planning projects in the private and public sectors. He also regularly contributes to the research and master plan design of small cities, city centers, and downtown redevelopments. His architecture and design firm is based in Albuquerque, New Mexico.

In addition to operating his architecture and urban design firm based in Pasadena, Stefanos Polyzoides is a founder and past president of the Congress for the New Urbanism. His coauthored study, Courtyard Housing in Los Angeles: a Typological Analysis helped revitalize the study of design typologies in architectural theory.

One of America’s leading documentary photographers, Miguel Gandert has exhibited widely, including in the Whitney Biennial. His largest body of work is found in Nuevo Mexico Profundo: Rituals of an Indo-Hispano Homeland. He is a professor in the Department of Communication and Journalism at the University of New Mexico.