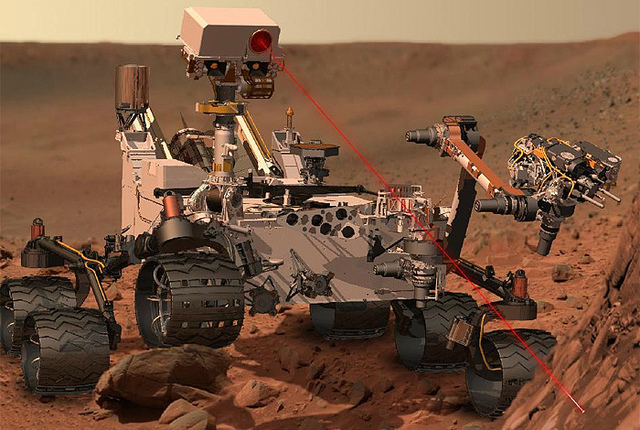 Agnes Cousin-Pilleri, a post-doctoral researcher in Los Alamos National Laboratory’s Chemistry Division, will discuss the trailblazing discoveries made by the ChemCam instrument on the Curiosity rover on Mars from noon to 1 p.m. May 28 at the Bradbury Science Museum.

“ChemCam is providing one of the largest and most powerful datasets in Martian exploration,” Cousin-Pilleri said. “In its first year on Mars, Curiosity and ChemCam have made many ground-breaking discoveries.”

In the first 620 sols (Martian days) on the red planet, ChemCam has returned more than 130,000 chemical spectra corresponding to more than 400 targets with more than 2,300 images. In the talk, Cousin-Pilleri will present an overview of the ChemCam’s findings in the Gale Crater.

The ChemCam instrument onboard Curiosity is the first to retrieve the elemental composition of Mars and provides researchers with some of the most crucial data in Martian exploration. Observations from this dataset have led to discoveries such as Martian dust contains water, and that rocks near the landing site show more diverse volcanism than was previously thought possible on Mars.

This talk, like all talks at the Bradbury Science Museum, is free and open to the public; attendees are encouraged to bring a lunch to the talk.

Cousin-Pilleri holds bachelor’s and master’s degrees in geology from the Institut géologique Albert-de-Lapparent at LaSalle Beauvais; a master’s degree in planetary science from Université Paris Sud; and a doctoral degree in astrophysics and planetology from Toulouse University.

She started as a post-doctoral student at the Laboratory in 2012. Her work focuses on data processing from the ChemCam instrument on the Curiosity rover on Mars.