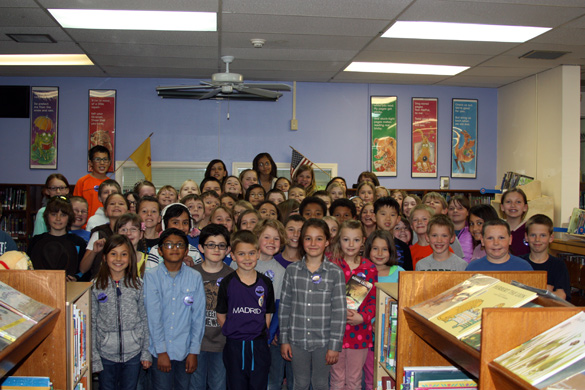 ‘Gregor’s friends’ pose in the Piñon Elemtary School Library in White Rock Thursday. All of these students have finished the book ‘Gregor the Overlander.’ Photo by Bonnie J. Gordon/ladailypost.com 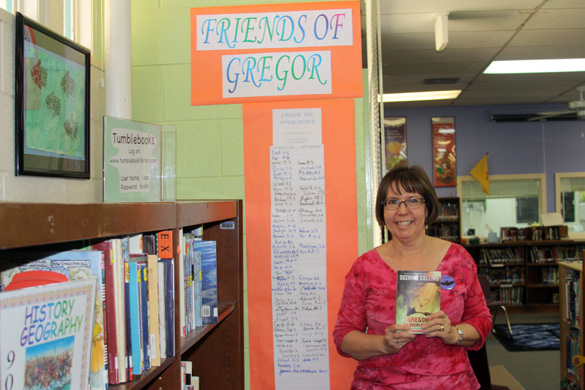 Librarian Julie Goen with a copy of ‘Gregor the Overlander’ poses near the poster listing the ‘Friends of Gregor.’ Photo by Bonnie J. Gordon/ladailypost.com
By BONNIE J. GORDON
Los Alamos Daily Post

Fifty students in third through sixth grade got a copy of the book. When they finished the book, they signed it and “read it forward” to another student. They also signed the “Friends of Gregor” poster in the library and earned a button. The new reader repeats the process.

“At the end of the project, we’ll collect the books and read them forward to another northern New Mexico school,” Goen said. “The goal is to develop a love of reading for the sake of reading. I want to foster a culture of readers in our school.”

A lot of adults at the school also have read the book so they can discuss it with students.

“The hardest part of the project was finding a book that would appeal to both boys and girls and work for third through sixth grade,” Goen said.

One benefit of the project is the interactions it generates between kids in different grades, she said.

The plot of “Gregor the Overlander” revolves around young Gregor and his two-year-old sister, Boots. The two fall into a magical underworld beneath New York City where the citizens ride giant bats and commune with giant rats. The book is the first in a series of five.

“Some kids have already read the whole series since we started in February,” Goen said.

Serveral students said Boots was their favorite character, though the wily Ripred the rat also got votes, as did the queen, Luxa.

In one favorite scene, Gregor saves Luxa from a spider using rootbeer.

Students are building an Underland Museum, complete with Lego figures of the animals and other characters. The project will end with a big celebration in April for all of Gregor’s Friends. 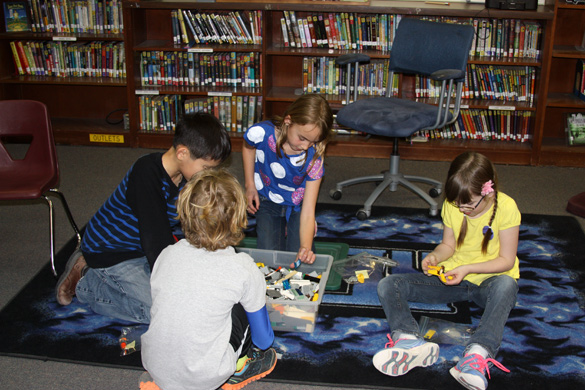