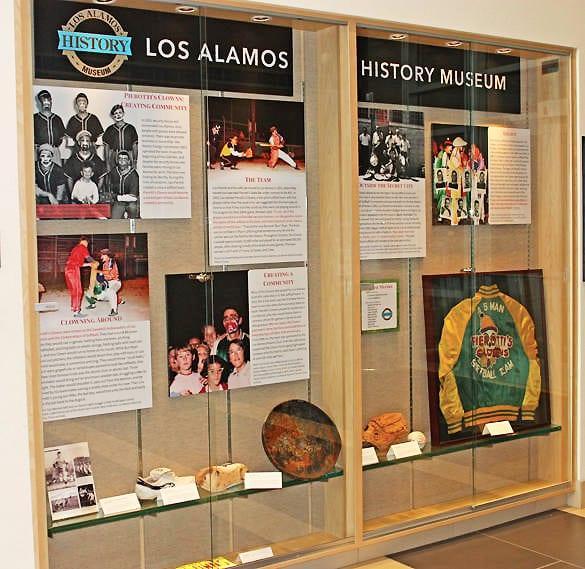 An exhibit featuring the Pierotti’s Clowns on dispaly at the Los Alamos Municipal Building. Photo by Kirsten Laskey/ladailypost.com

The Los Alamos History Museum is excited to announce that its new exhibit, “Pierotti’s Clowns: Creating Community,” is on display now through December in the Los Alamos County Municipal Building at 1000 Central ave.

Visit this exhibit to learn about the celebrated accomplishments of Pierotti’s Clowns and how this five-man, fast-pitch softball team shaped the development of Los Alamos with their athletic skill, charming antics and philanthropy. The exhibit is in the main lobby of the Municipal Building.

The exhibit also extends onto the Los Alamos History Museum website. Visit www.losalamoshistory.org/clowns to learn about the history of the team and see a roster of the athletes who played for the Clowns. The website also highlights stories and memories of Pierotti’s Clowns.

Did you watch the clowns play? If so, we want to hear from you! Help the Los Alamos Historical Society preserve the legacy of the clowns by sharing your memories of the team on the exhibit’s web page.

Aug. 14, there will be a community celebration of the exhibit and Pierotti’s Clowns. We will share more information soon, but for now mark your calendars for 4-6 p.m. Aug. 14 in the Municipal Building.

In 1953, security fences still surrounded Los Alamos. The Atomic Energy Commission (AEC) operated the town. The community was still finding its identity after the end of the Manhattan Project. Lou and Lee Pierotti ran the local soda fountain under contract to the AEC.

Lou was a talented softball player and had the idea to create a fast-pitch softball team with five players rather than the usual nine. Lee suggested the team play as clowns so that if they lost they could say they were just playing around. Lou built the team around a stellar pitcher, Bernard “Bun” Ryan.
In the program for their final game, the team reflected on their beginning, saying, “To win, all of the players would have to field like vacuum cleaners, run like gazelles, knock the seams off the softball at the plate, and most important of all—have a pitcher of world class.”

Pierotti’s Clowns played 202 games over a span of 25 years. They won 177 of those games and raised more than $2 million for charity by today’s standard. They played in Los Alamos and the surrounding region, drawing crowds of hundreds. They were known as the Goodwill Ambassadors of Los Alamos and the Globetrotters of Softball.

They had some 40 clown tricks they would use in games: batting from one knee, pitching blindfolded, pitching balls on elastic strings, fielding balls with trash can lids, and one clown would run to home on his hands. While Ryan struck out pitchers, the infielders would shoot dice or play with tops, or Lou might play a concertina and sing. They would throw “mush balls,” which were grapefruits or cantaloupes painted to look like softballs. One of their most famous tricks was the atomic bum or atomic bat.

Three teammates would bring out an enormous wooden bat, struggling under its weight. The batter would shoulder it, pass out from the exertion, and be revived by his teammates waving a smelly shoe under his nose.

Then Lou’s young son Mike would trot onto the field and easily tote the bat back to the dugout.

A clowns game was a unique and not-to-be-missed entertainment opportunity for residents of fenced-in Los Alamos. Through their athleticism, antics, and spirit of charity, Pierotti’s Clowns shaped the post–WWII Los Alamos community.