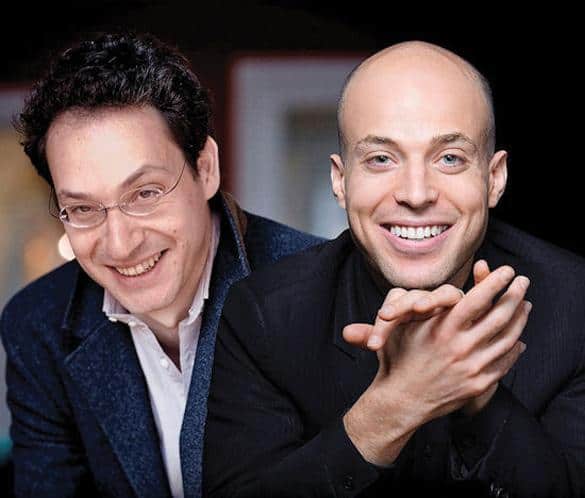 Combine two of the world’s greatest concert pianists and two incredible Steinway pianos (one on loan, with thanks, from the Steinway company) and you have an evening of unparalleled music.

Pianist Shai Wosner has attracted international recognition for his exceptional artistry, musical integrity, and creative insight. His performances of a broad range of repertoire-from Beethoven and Schubert to Ligeti and the music of today-reflect a degree of virtuosity and intellectual curiosity that has made him a favorite among audiences and critics, who note his “keen musical mind and deep musical soul” (NPR’s All Things Considered).

Wosner’s recordings have been praised for their inventive pairings of classical and modern masters. In addition to Impromptu, his recordings for Onyx include concertos and capriccios by Haydn and Ligeti with the Danish National Symphony conducted by Nicholas Collon; solo works by Brahms and Schoenberg; works by Schubert paired with new commissions from Missy Mazzoli; and Beethoven’s complete sonatas and variations for cello and piano with Ralph Kirshbaum. He also performs works by Bartók, Janácek, and Kurtág on a recording with violinist Jennifer Koh for Cedille Records.

Wosner is a recipient of Lincoln Center’s Martin E. Segal Award, an Avery Fisher Career Grant, and a Borletti-Buitoni Trust Award-a prize he used to commission Michael Hersch’s concerto Along the Ravines, which he performed with the Seattle Symphony and Deutsche Radio Philharmonie in its world and European premieres. He was in residence with the BBC as a New Generation Artist and is a former member of Lincoln Center’s Chamber Music Society Two.

Born in Israel, Wosner studied piano with Opher Brayer and Emanuel Krasovsky, as well as composition, theory, and improvisation with André Hajdu, and at The Juilliard School with Emanuel Ax.

Pianist Orion Weiss is one of the most sought-after soloists in his generation of young American musicians. He has performed with the major American orchestras, including the Chicago Symphony, Boston Symphony, Los Angeles Philharmonic, and New York Philharmonic. His deeply felt and exceptionally crafted performances go far beyond his technical mastery and have won him worldwide acclaim.

Named the Classical Recording Foundation’s Young Artist of the Year in September 2010, in the summer of 2011 Weiss made his debut with the Boston Symphony Orchestra at Tanglewood as a last-minute replacement for Leon Fleisher. In recent seasons, he has also performed with the Los Angeles Philharmonic, San Francisco Symphony, Philadelphia Orchestra, Pittsburgh Symphony, Toronto Symphony Orchestra, National Arts Centre Orchestra, and Orpheus Chamber Orchestra, and in duo summer concerts with the New York Philharmonic at both Lincoln Center and the Bravo! Vail Valley Festival. In 2005, he toured Israel with the Israel Philharmonic Orchestra conducted by Itzhak Perlman.

Also known for his affinity and enthusiasm for chamber music, Weiss performs regularly with the violinists Augustin Hadelich, William Hagen, Benjamin Beilman, James Ehnes, and Arnaud Sussman; the pianist Shai Wosner; and the cellist Julie Albers; and the Ariel, Parker, and Pacifica Quartets.

He won the 2005 William Petschek Recital Award at Juilliard, and made his New York recital debut at Alice Tully Hall that April. Also in 2005 he made his European debut in a recital at the MusÃ©e du Louvre in Paris. He was a member of the Chamber Music Society Two program of the Chamber Music Society of Lincoln Center from 2002-2004, which included his appearance in the opening concert of the Society’s 2002-2003 season at Alice Tully Hall performing Ravel’s La Valse with Shai Wosner.