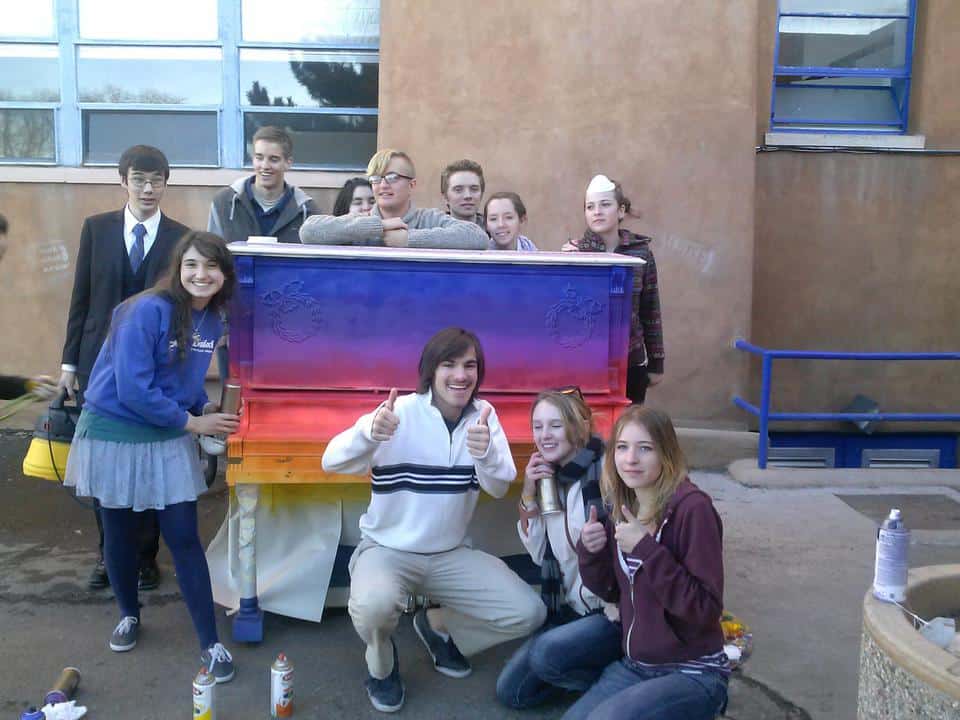 Keith Porter-Snell at the piano. Porter-Snell will appear in concert with cellist James Holland Wednesday. Courtesy/LAAC

The Los Alamos Arts Council continues the tradition of offering excellent programs to the public through its free Brown Bag Performance Series at noon Wednesday, April 2 at Fuller Lodge, with pianist Keith Porter-Snell in concert with cellist James Holland.

Porter-Snell is a pianist, piano teacher and writer of educational music for piano students. As a performer, he specializes in piano music written to be played with the left hand alone.

He has more than 150 titles published by the Kjos Music Company, a leading publisher of educational music. Keith won the Joanna Hodges International Piano Competition, which provided his London debut in 1984. He subsequently signed with Columbia Artist Management and recorded for Virgin Records.

In 1986, Porter-Snell was diagnosed with focal dystonia, a repetitive motion injury, in his right hand. As a result, he found it increasingly difficult to meet the demands of his performance schedule. In 1988 he withdrew from his professional life as a pianist, and re-focused his energies on his teaching career, expanding his independent piano studio and giving master classes throughout the U.S. He is currently visiting artist faculty at the New Mexico School of Music.

In 1993, Porter-Snell started his own company, Academy Records, which specialized in making CD recordings of standard piano teaching music. These CDs were created for piano students and teachers to listen to as models for performance. His creation of this product has influenced and revolutionized piano teaching materials.

Porter-Snell entrepreneurial endeavor with Academy Records led to the invitation from the Neil A. Kjos Music Company to become an editor, author and composer of educational piano music. His music books and CDs are ranked among the most popular teaching resources on the market today.

Porter-Snell is a passionate proponent of piano music for the left hand alone. He returned to the concert stage in 2006 as a left-handed pianist, discovering an intensely gratifying new journey of music making.

In Spring 2012, Porter-Snell made a three-week tour of Malaysia and Singapore. In July 2014, Porter-Snell will perform and teach at the International Piano Festival in Lindlar, Germany.

Porter-Snell received Bachelor and Master of Music degrees in Piano Performance from the University of Southern California, where he was a student of John Perry. Other studies include work with Maria Clodes, professor of piano at Boston University.

A native of San Francisco, Porter-Snell lives in Santa Fe. He maintains a second home in Bath, England. Visit him at his website www.keithportersnell.com.

Cellist James Holland is a native of Pensacola, Fla. He holds degrees in cello performance from the University of Alabama and the Eastman School of Music.

For two years, Holland was a member of the New World Symphony, a Miami-based training orchestra under the direction of Michael Tilson Thomas. In 1996, Holland was appointed principal cellist of the Charleston (S.C.) Symphony Orchestra, a position he held until his relocation to Albuquerque in 2007, with his wife, violinist Megan Julyan Holland.

Holland spends his summers in Breckenridge, Colo., as principal cellist of the Breckenridge Music Festival Orchestra. He can also be heard performing the music of Duke Ellington with jazz legends Eddie Daniels and Roger Kellaway on the 2013 IPO Recordings release, “Duke at the Roadhouse: Live in Santa Fe,” which was recently named Best Jazz Album of the Year by L’Academie du Jazz in Paris, France. Holland was invited by Daniels and Kellaway to perform with them again at the 2013 Detroit Jazz Festival.

He maintains a large, active private teaching studio, and co-directs the strings program at Sandia Preparatory School with his wife Megan. What little time he has left is spent with his two daughters Olivia, 4, and Emily, 2.