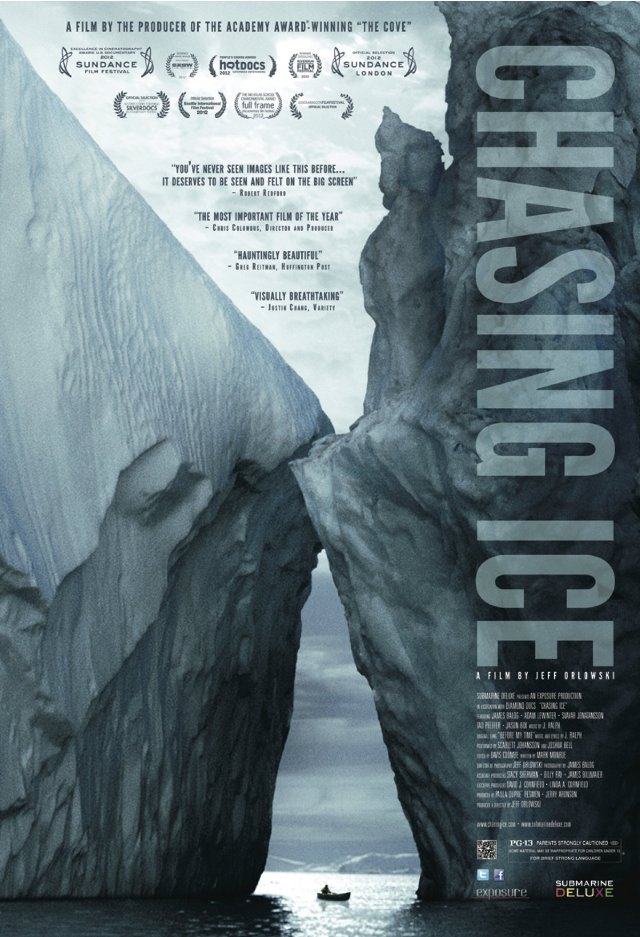 Winner of numerous awards, including the Excellence in Cinematography Award: U.S. Documentary at the Sundance Film Festival, Chasing Ice tells the story of one man’s plight to document evidence of our changing planet by using time-lapse cameras to capture changes in glaciers over several years.

The Pajarito Environmental Education Center (PEEC) is very pleased to sponsor a special screening of Chasing Ice at 7 p.m. Sunday, Nov. 3 at the Reel Deal Theater.

“We are excited to have the opportunity to bring this powerful film to Los Alamos,” said Rebecca Shankland, past PEEC Board President. “Climate change is something we can’t ignore, and Chasing Ice brings this important issue to light in a really compelling and entertaining way.”

Tickets to the movie will cost $12 and can be purchased at the door or in advance at the Reel Deal Theater.

According to a Denver Post review, “The scale of the glaciers, and the almost hallucinogenic clarity of the images, make the resulting footage, based on three years’ shooting, most impressive. One piece of ice we see breaking off is said to be the size of lower Manhattan. Balog remarks that the ice masses he photographs are as individual as human faces, and what we see sometimes does resemble portraiture.”

In the spring of 2005, acclaimed environmental photographer James Balog headed to the Arctic on a tricky assignment for National Geographic: to capture images to help tell the story of the Earth’s changing climate. Even with a scientific upbringing, Balog had been a skeptic about climate change. But that first trip north opened his eyes to the biggest story in human history and sparked a challenge within him that would put his career and his very well-being at risk.

Chasing Ice is the story of one man’s mission to change the tide of history by gathering undeniable evidence of our changing planet. Within months of that first trip to Iceland, the photographer conceived the boldest expedition of his life: The Extreme Ice Survey. With a band of young adventurers in tow, Balog began deploying revolutionary time-lapse cameras across the brutal Arctic to capture a multi-year record of the world’s changing glaciers.

As the debate polarizes America and the intensity of natural disasters ramps up globally, Balog finds himself at the end of his tether. Battling untested technology in subzero conditions, he comes face to face with his own mortality. It takes years for Balog to see the fruits of his labor. His hauntingly beautiful videos compress years into seconds and capture ancient mountains of ice in motion as they disappear at a breathtaking rate. Chasing Ice depicts a photographer trying to deliver evidence and hope to our carbon-powered planet.

For more information about this and other programs offered by PEEC, visit www.PajaritoEEC.org, email Programs@PajaritoEEC.org or call 662-0460.

The Pajarito Environmental Education Center (PEEC) was founded in 2000 to serve the community of Los Alamos. It offers people of all ages a way to enrich their lives by strengthening their connections to our canyons, mesas, mountains, and skies. PEEC maintains a nature center, holds regular programs and events, and hosts a number of interest groups from birding to hiking to butterfly watching. PEEC activities are open to everyone; however members receive exclusive benefits such as discounts on programs and merchandise. Annual memberships start at $20. To learn more, visit http://www.PajaritoEEC.org.