PEEC, Reel Deal Team Up for ‘The Big Year’ 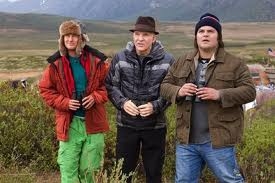 The Reel Deal Movie Theater and the Pajarito Environmental Education Center are bringing back their popular partnership to show nature films over the fall and winter months.

The series begins at 6 p.m. Thursday, Oct. 4 with a showing of The Big Year.

“This is the perfect film to kick off the series,” Katie Watson of PEEC said. “It’s a birding film, so it will appeal to our many birders in Los Alamos, but it also stars Jack Black, Steve Martin, and Owen Wilson, so fans of these actors, even if they aren’t birders, will want to watch it, as well.”

The Big Year tells the story of three competing birders hoping to get a “big year,” and be named Birder of the Year.  The film is as funny as you might expect, with Black, Martin and Wilson starring, but at the same time it doesn’t treat birding as a joke.

The film was featured in a series of articles and behind-the-scenes peeks in WildBird Magazine.  In one article Director David Frankel says, “There’s no mocking.  It’s very respectful.”

He goes on to say that the cast and crew became birders after working on the film. “Once you’re aware of birds, you can’t not be drawn to the movement in the skies or in the trees of winged creatures.”

The film was based on the book of the same title, which in turn was based on a true story.  One of the men who the book was about, Greg Miller, was on set for the first three weeks of filming as a consultant, and taught the actors how to bird.

Adding to the film’s genuineness, the cinematographer, Lawrence Sher, has been a birder since he was six years old, spotting rare birds on family vacations to birding hot-spots around the country.

Entertainment Weekly says, “It’s just a zig-zaggy light comedy about three friendly rivals hopping planes to the outer islands of Alaska, or rushing toward a storm center to watch birds drop out of the sky … Obsessing over birds can sound silly, yet what I found oddly touching about The Big Year is that it celebrates the idea that no obsession, when you think about, is really very rational.”

The Reel Deal will be offering special prices on concessions for this showing.  The cost of the film is just $10 for adults and $5 for children at the door, with proceeds being split between PEEC and the Reel Deal.

Don’t miss the chance to see this funny film about the world of birding.