PEEC’s new Yahoo group, PEECWildPlants, is desperately trying to find the signs of spring that are eluding us after our feeble winter snows.

Up until the end of March, there were practically no sightings of the usual suspects: Pasque flowers, golden smoke, verbena, though Craig Martin found a surprise Arabis (probably fendleri) in Upper Rendija Canyon with a single bloom. 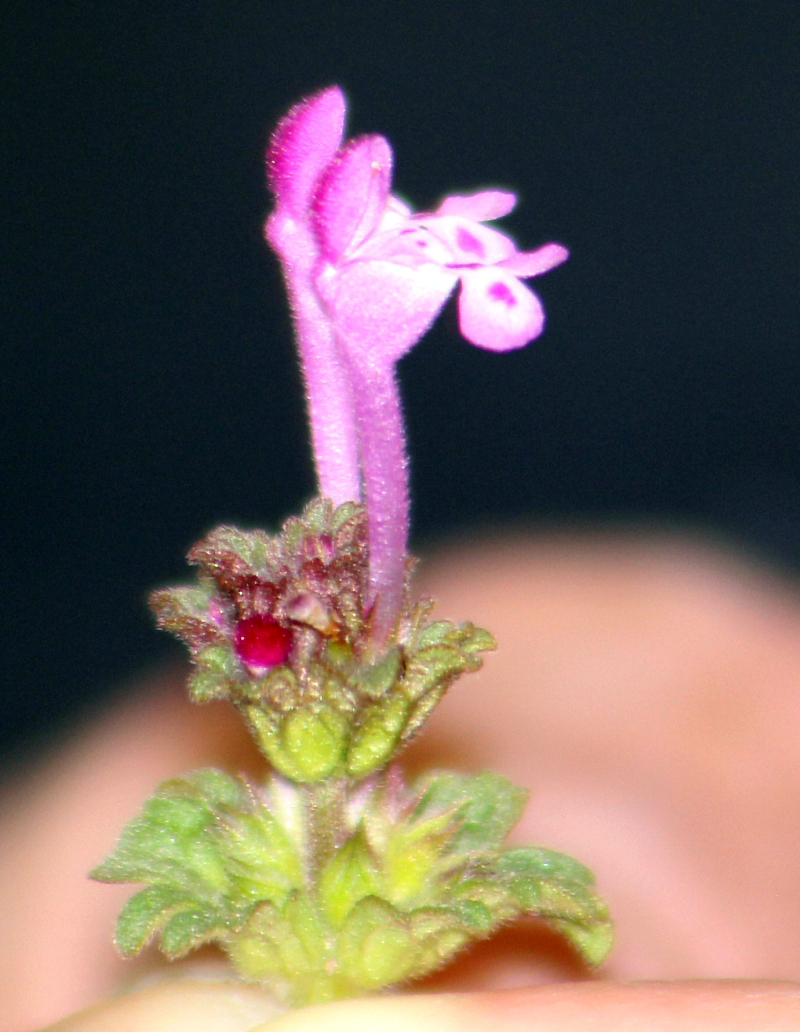 Henbit is a new discovery for Los Alamos County. Photo by Terry Foxx

But despite the record-dry season, citizen science made a great new find on March: Terry Foxx photographed a mysterious plant in a neighbor’s yard and posted it on WildPlants. Craig Martin promptly identified it as henbit or dead-nettle, a tiny mint (Lamium amplexicauli) that is found state-wide.

Chick Keller determined that it is a new species for the County. So in the midst of drought, we have a delightful discovery, but Chick won’t list it till he’s sure that it’s not a garden escapee.

In this arid year, I’d like to pay homage to two overlooked feisty species that are rarely celebrated: filaree and dandelion.

These invasive tough-guys appeared with great determination along the hard-pack green edges of Smith’s parking lot in White Rock March 22. 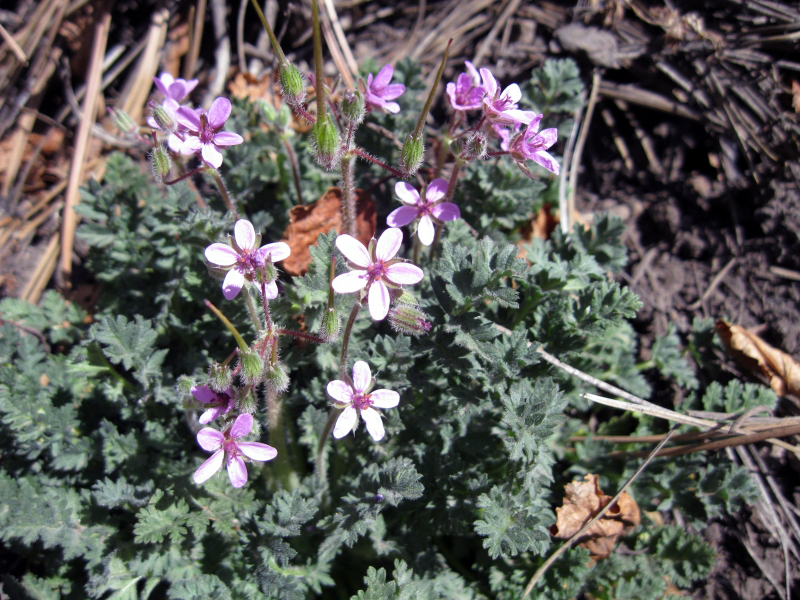 Filaree is also known as cranesbill—look for the long seedpods that look like beaks. Photo by Charles Keller

You’ll find them in the most forlorn bits of waste land in early spring, so here are some interesting facts to help you appreciate these run-of-the-mill species.

Red-stemmed filaree (also called alfileria) grows high and low, in lawns and road edges, but is so diminutive that it’s hard to appreciate without a magnifying glass or a deep knee bend.

Once you’ve picked it (go ahead, it’s classified as a weed), examine the ferny leaves and exquisite little bunches of rosy pink five-petaled flowers that cluster at the end of the flower stalk. 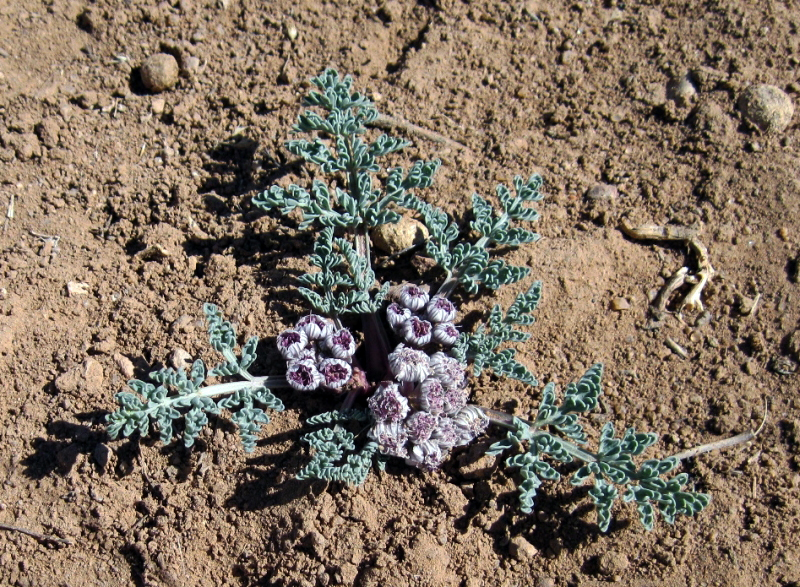 The wafer parsnip foliage resembles carrot or parsley leaves; these pink-purple flowers will quickly turn into the winged seed/fruit. But the favored edible part is the root. Photo by Charles Keller

As soon as the flower goes to seed, it produces the unmistakable long, narrow beak that gives it the name “cranesbill” or “heronbill.” (The beak is actually the style, part of the pistil.)  The family name for geraniums is Geraniaceae, from the Greek “Geranos,” meaning “crane.” The scientific name, Erodias cicutarium, means “heron” (Greek “herodias”—check your bird book).

A PEECWildPlant member asked whether filaree produces the sharp corkscrew stickers that her dog used to get in his paws—yes, that’s the perfect description of the nasty but effective mechanism that the seed uses to drill into the hard ground.

Robert DeWitt Ivey has a lovely drawing of this tiny twisted seed in his Flowering Plants of New Mexico. No wonder it managed to invade the American Southwest from Spain so successfully.

Dandelions are another conqueror from Europe, but their success comes from a seed that floats rather than drills. Those splendid little lollipop seed-heads are a Darwinian masterpiece—not only do they sail off like small parachutes to colonize uncharted territories, but they get our children’s cooperation to set them off on the breeze.

Dandelions should also getcredit for their usefulness to humankind. They’ve long been used for dandelion wine, tasty salads, and a natural diuretic.

The scientific name is Taraxacum officinale—the latter word always refers to plants that are used medicinally. The French are more specific about its effects: they call it piss-en-lit, suggesting that a large dose may result in wetting the bed.

Originally the English name was “lion’s tooth,” for the heavily indented leaf shape. But eventually the English got uppity and adopted the French version, “dent-de-lioun,” pronouncing the French word for “tooth” correctly as “dawnh” or “dan.”

Another overlooked early bloomer is the wafer parsnip, which is almost as odd looking as its name. Several plants emerged in my meadow and driveway March 30, with frilly parsley-like grey leaves and tightly gathered clumps of pale purple flowers usually at the top of a stout stalk.

The miniscule bunches of flowers are surrounded by white sepals, like white tissue paper wrapped around a bouquet. The flowers quickly turn into seeds, each one resembling a tiny football with four wings or ribs on the long edge.

Wafer parsnips are, like parsnips in the carrot (parsley) family, many of which have an underground taproot or bulb (bulbosus) that is edible and nutritious.

Pueblo people collect the wafer parsnip bulbs in early spring before domestic plants like carrots have developed. It’s sometimes called biscuit root (Harrington, Edible Native Plants of the Rocky Mountains, 1967.) But the root or bulb is pretty skimpy, so it will serve better for dieting than entertaining.

A close relative, called chamija (Cymopterus acaulis, var. fendleri) is also a food source for Hispanics, who pick it for a welcome early-spring salad leaf. Anglos call it wild celery.   It also blooms early with similar flowers and leaves that are more lobed than the frilly wafer parsnip. It’s blooming now on the White Rock Rim Trail, south of the Blue Dot trailhead.

Los Alamos folks will have to come to White Rock to collect their wafer parsnip and wild celery meals—they are at home in the rocky, dry soil of the pinyon-juniper woodland.

But wherever you go, on the trails or on sidewalks, be sure to keep checking for hidden treasures of the plant world. 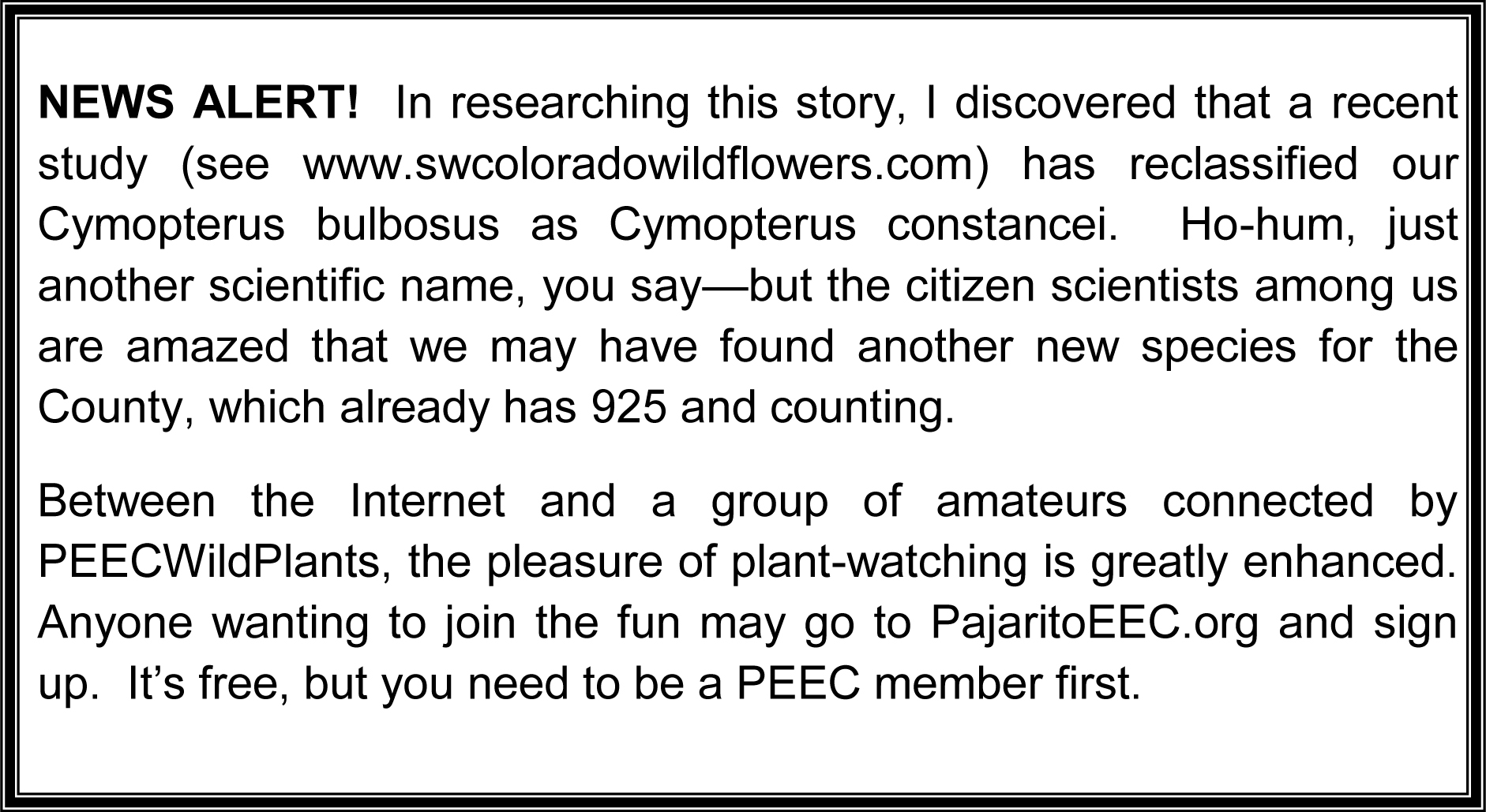 Editor’s note: This is part of a series of stories from the Pajarito Environmental Education Center (PEEC) leading up to its annual Earth Day Festival set for 10 a.m. to 2 p.m., 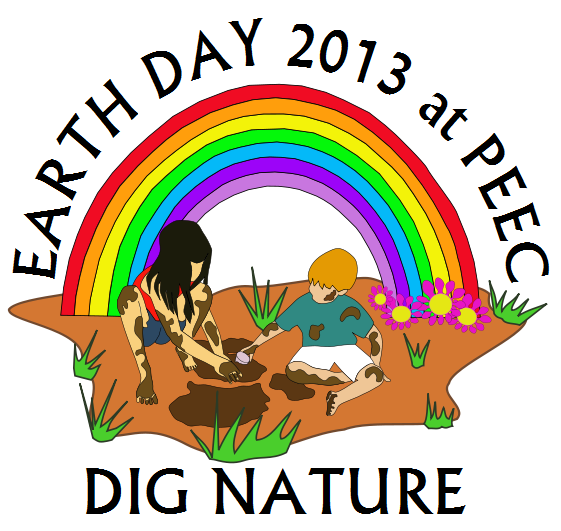 This year’s Earth Day Festival will feature displays by community groups of their earth-friendly products and practices and their information about our environment on the Pajarito Plateau.