The Mission of San Juan Capistrano is known for swallows returning each year.

There even is a website dedicated to this event.

Turkey Vultures are one of Los Alamos’s earliest returning birds, but they’re not quite as endearing as the swallows.

Four Turkey Vultures were seen migrating through the area or returning to their roost high in a tree near the Los Alamos Canyon ice rink on March 16, 2013.

The road by the ice rink forms a loop and heads up the north side of the canyon. A parking area at the top of the canyon allows an easy hike along the road to a viewing spot.

A person can then look directly across to the treetops at the vultures roosting there morning and evening.

The vultures are very aware of their surroundings and look back in turn.

They may take off if a person moves too fast or is too close for a vulture’s comfort. Binoculars can be helpful for seeing these large birds that are actually rather shy and easily alarmed.

This would be in the 1930’s to early 1940’s. Another Turkey Vulture roost is located near the Bandelier National Monument visitor center in Frijoles Canyon.

Probably Turkey Vultures have been returning to the same area for as long as people have been present to observe them.

More remarkably, it appears that the Turkey Vultures return to specific trees in an area.  One or two trees may stand out for a near lack of pine needles.

The branches of these trees may have become worn as a result of Turkey Vultures coming to roost in them every day during the summer, year after year. However other trees do not appear to be affected by the birds roosting on them.

Although Turkey Vultures roost in trees, they do not have breeding nests in them. Instead they scratch an indentation on bare the ground of caves, cliffs or hollow logs to lay their eggs.

The canyons of the Pajarito Plateau seem ideal for this kind of “nesting”, but has anyone seen such a nest?

One characteristic sight is the Turkey Vultures’ spreading their wings wide in order to warm and dry themselves—maybe even rid themselves of bacteria.

This is called the “horaltic pose,” as seen in the photo below.

Keeping a wary eye on a nearby person. Photo by Robert Dryja

Why do Turkey Vultures prefer the location near the ice rink?

A tree at the top of a canyon cliff is good take-off point for a bird that flies primarily by gliding.

A Turkey Vulture quickly can be one or two hundred above the ground by taking off from such a location.

The birds can be observed floating along rising thermals, barely flapping their wings.

Circling groups of the birds can be seen in the air near the Omega Bridge about two hours after sunrise. 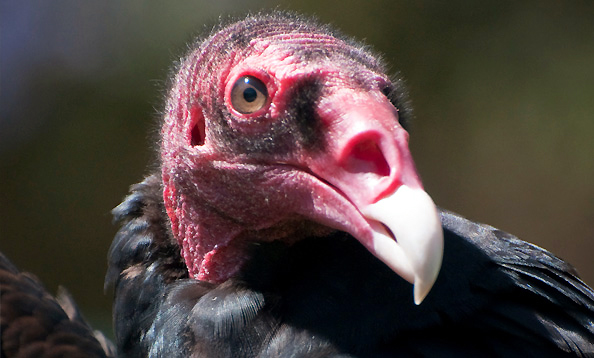 The head has a covering of small fuzzy feathers. It is not completely bald. Photo by May Woon, San Francisco Zoo

Where are the Turkey Vultures flying for food?  The birds typically start the day by circling up and then gliding east or northeast over Los Alamos.

This is generally following the direction of Alamo Canyon. Turkey Vultures are carrion eaters, so they must spread far afield in order to find dead animals.

Do they simply spread out to cover as much territory as possible, or do they have preferred areas?

Does the group that roosts in Frijoles Canyon go to different areas compared to the group near the ice rink?

Radio monitors have been placed on Turkey Vultures in the Pennsylvania area. One bird flies about 30 miles on a daily basis during the summer.

Where do to the Los Alamos vultures go in the autumn and from where do they return in the spring?

The monitoring of Turkey Vultures in Pennsylvania indicates considerable variability. One bird migrated about 700 miles between Pennsylvania and Florida for one year.

Another bird instead migrated about one hundred miles between Pennsylvania and Maryland.

It is easy to assume that a single group of vultures migrate back and forth together each year.

Perhaps instead, different birds migrate to and from different areas. Additionally, a single bird may be a short or long distance migrant from one year to the next.

If you have any thoughts or comments about our Los Alamos Turkey Vultures, send them to naturalist@pajaritoeec.org at the Pajarito Environmental Education Center.

More information on Turkey Vulture daily movement and seasonal migration can be found at the following website: http://www.vulturemovements.org/hms/hms_tv.htm.