Particular thanks to Patrick Rowe

Part 2 The Pajarito Plateau – Its Creation

This first event is called the Tshirege Member and its ash accumulated to be hundreds of feet deep in parts of what would become the Pajarito Plateau. The second major event is called the Otowi Member and it occurred 1.2 million years ago. Its ash also accumulated to be hundreds of feet deep. Other layers of ash came from the smaller eruptions occurring between 1.2 and 1.6 million years ago. These are named the Cerro Toledo Interval. 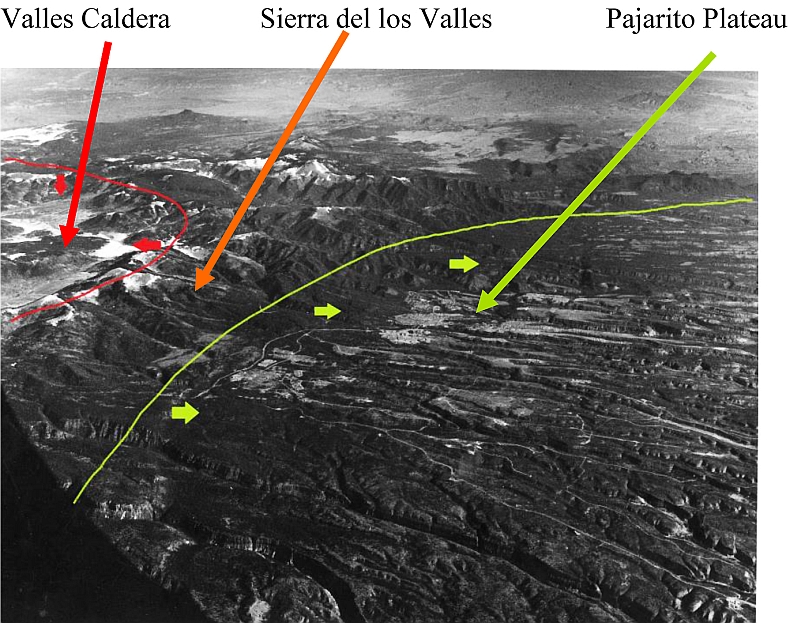 The volcanic ash from the Valles Caldera eruptions flowed over the mountains of the Sierra de los Valles to create the Pajarito Plateau. Canyons then would be eroded into it when eruptions ended. 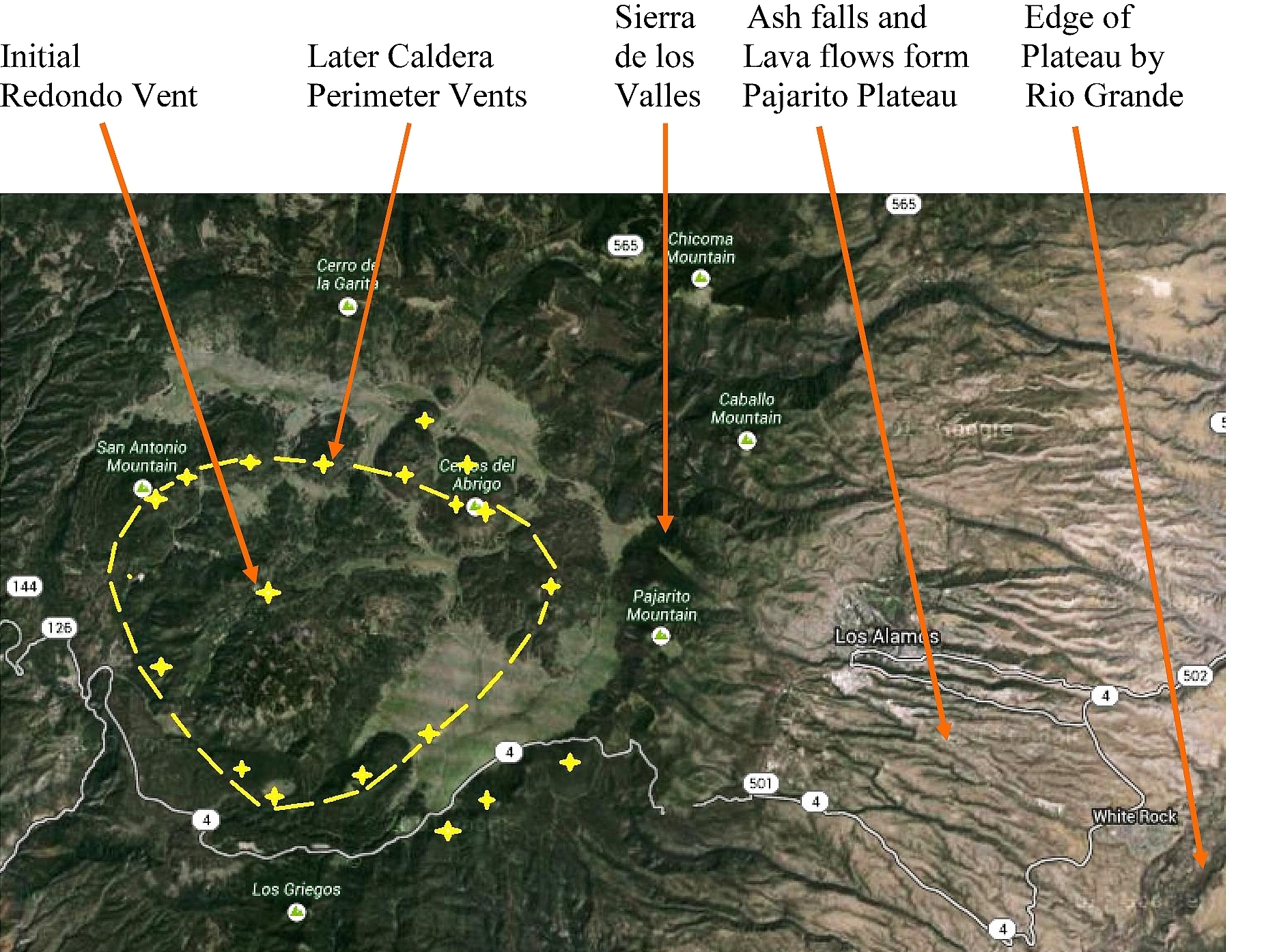 Each of the two events involved multiple, major eruptions. An eruption involved two steps. The initial step involved an eruption through a relatively small vent. Lava primarily in the form of lighter ash shot explosively upward. A helpful analogy is squirting water under pressure from a hose nozzle. The water has a columnar shape rather than a disbursed spray. Mount St. Helens had an ash column that was approximately fifteen miles high. The Valles Caldera ash column is estimated to have been thirty miles high in comparison. This kind of ash is light enough to be blown by winds away from an erupting volcano. Ash layers ten feet thick have been identified ten miles from the Valles Caldera vent. Ash layers up to five inches thick also have been identified 180 miles away in Socorro.

A vent became larger as an eruption continued. This was due to the sides of the vent being eroded away. The eruptive pressure to throw ash high in the sky decreased as a result. As the ash was shot into the atmosphere it also cooled. Larger and heavier pieces of ash or pumice now could hold together and not fly so high. Rather than shooting upward as a distinctive column, most volcanic material now flowed away from the vent in huge layers of volcanic ash. Earlier layers created by airborne ash now were covered by heavier ash flowing across the ground. The analogy to a water hose again is helpful. Water may spill from the open end of a hose in any direction when there is no nozzle to direct it upward. The temperature of the volcanic ash affected how the material joins back together once deposited. Hotter ash tended to weld itself back together, increasing is strength.

The light colored layers seen in the canyon cliffs along the road side in eastern Los Alamos are a result of the initial airborne ash. The salmon colored layers are a result of the ground flows that followed thereafter. The magnitude of these two events is difficult to grasp. An estimated 145 cubic miles of material were expelled in terms of volume. An event may have lasted weeks or months in terms of time. The combined flows at ground level from the initial event were up to 600 feet thick. They were up to 800 feet thick for the second event.

A vent was located in the area of what is now Redondo peak in the Valles Caldera. The pool of lava in the chamber under this vent was reduced during the two major events. The land above this chamber then settled downward. The downward settlement partially replaced some of the 145 cubic miles that had been expelled. An approximately circular caldron from 12 to 15 miles across was created around the Redondo vent.

Several kinds of volcanic activity occurred in this huge caldron. An up swelling occurred where the vent had been active and it now is known as Redondo Peak. A ring of small eruptions occurred primarily on the northern perimeter of the caldron. The caldron itself has not remained at its lowest elevation after its initial creation. Redondo Peak and the smaller volcanoes all are part of a dome-like upward resurgence of the caldron floor.  This resurgence is a result of ongoing volcanic activity deep within the earth below.

Pajarito Mountain is part of the rim of the Valles Caldera and it is approximately 10,400 feet high. The Rio Grande in the Espanola basin has an elevation of 5,500 feet. The Pajarito Plateau therefore gains nearly one mile in elevation as it moves from near the river to the mountain top over a distance of 15 miles.

The Pajarito Plateau is part of the creation of the Valles Caldera and earlier volcanic events. However, this is not the only event that has had an impact upon it. Well worn river rocks can be seen along the roadside when coming up from the Rio Grande to Los Alamos. These rocks are hundreds of feet higher and miles from the river. White Rock, Espanola and Abiquiu all were once at the bottom of a lake. The impact of a different field of lava and water will be presented next.

The distance from the Pueblo Canyon bottom to the Kwage Mesa top is approximately 450 feet. The parallel colored bands result from the repeated ash falls and lava flows from the eruptions. 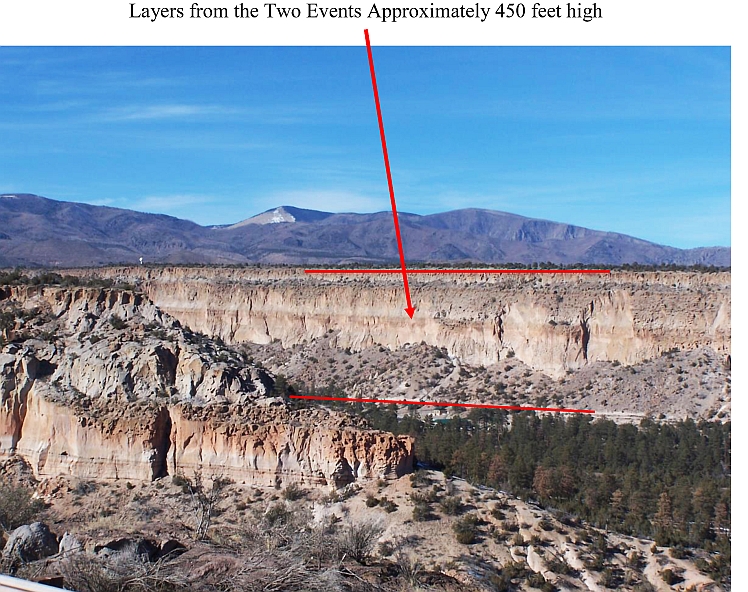 The distance from the Pueblo Canyon bottom to the Kwage Mesa top is approximately 450 feet. The parallel colored bands result from the repeated ash falls and lava flows from the eruptions. 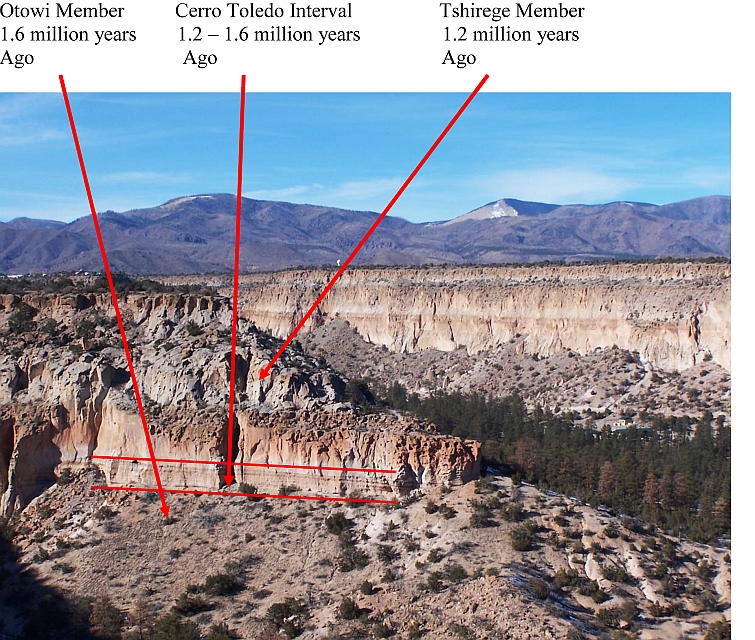