Winter is settling in and I am enjoying a cup of warm tea. My mind tends to explore ideas far afield in these circumstances. The cup is filled about four inches deep with tea when a thought comes to me. Those four inches would make all the difference if I were a ponderosa tree. Now, what is the connection between a cup of tea and pine trees? Is it not apparent?

Since it is a pleasant winter day with sunshine, let us make a trip to see what is going on. Specifically, let us go to Burnt Mesa along N.M. 4, where a Burnt Mesa extends somewhat like a finger away from the volcanic rim of the Valle Grande.

Ponderosa Campground is located at the base of the finger. The campground is shaded by a forest of ponderosa trees that typically are 40 to 50 feet high. The ground is covered with pine needles and only a few bushes grow below the trees. The needles contain a chemical that acts as an herbicide, discouraging other plants from growing. 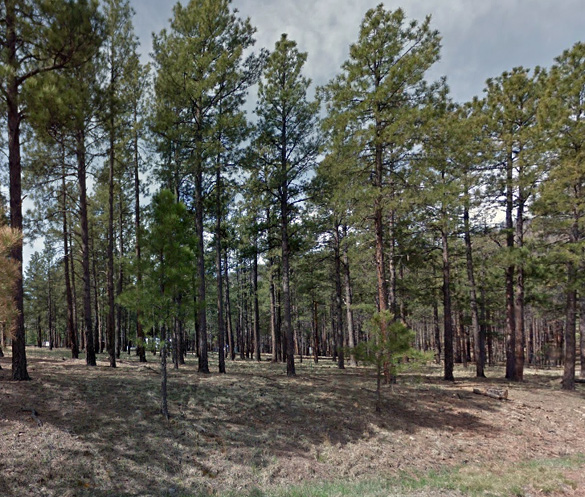 The tall ponderosa trees at the Ponderosa campground. Photo by Robert Dryja

However, the tall trees came to a sudden stop, almost forming a straight line along one side of the campground. From here shorter ponderosa trees extend into the distance. These trees are typically about 15 to 20 feet tall. This is where the forest fire passed close to the campground. It has taken 28 years for a new generation of ponderosa trees to grow back. Shrubs and grasses now grow abundantly among these smaller trees. 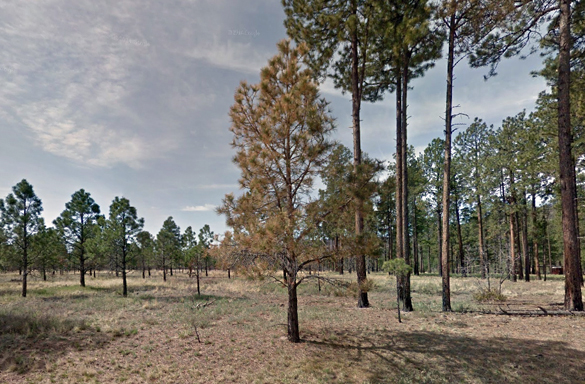 The edge of the campground where the fire passed. The shorter trees on the left side grew after the 1977 La Mesa forest fire. Photo by Robert Dryja

You may notice something curious from place to place among this new growth. A straight line of bare earth will extend across the ground. It may be a foot wide and possibly 20 feet long. If you look closely you will see that the line contains wood ash and bits of charcoal. A burning tree trunk fell here during the forest fire. It continued to burn possibly for hours. The heat from the burning trunk penetrated the ground, sterilizing it and leaving bits of charcoal. The resulting ash changed the chemical composition of the soil. Plants still do not easily grow here after all these years. This straight line of bare soil is a sort of memorial to a fallen tree. 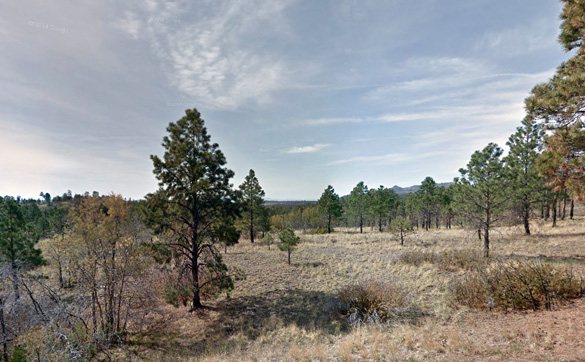 The trailhead of Burnt Mesa Trail is located farther down N.M. 4, leading toward Bandelier National Monument. The trees now are shorter and more spread out when compared to the new trees by Ponderosa Campground.  You will be hiking by a lot more shrubs and grasses. It is easy hiking since Burnt Mesa slopes gently downhill. Ponderosa Campground is at 7,600 feet, but the elevation drops to about 6,600 feet over the six miles to the entrance to Bandelier National Monument. 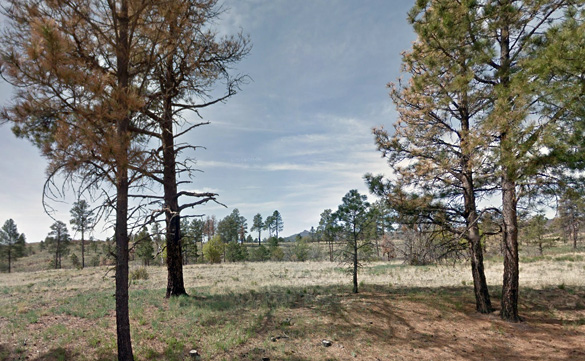 Increasingly larger open areas with shrubs and grasses occur. A few large surviving trees from the fire are in the distance. Photo by Robert Dryja

The landscape becomes barer of shrubs and grasses as you continue toward Bandelier. Not even small ponderosa trees grow in much of this area. However, a few tall ponderosa trees are scattered about. Those are the survivors from the 1977 fire. Young trees have not been able to establish themselves here, unlike the trees near the Ponderosa Campground. 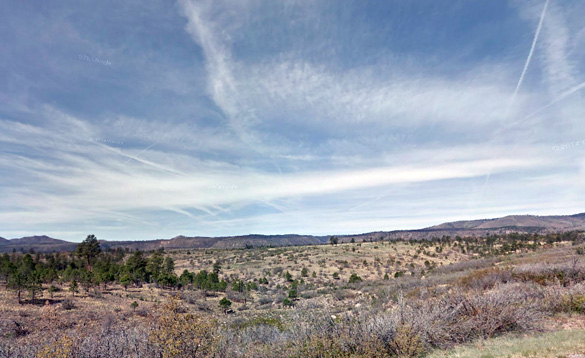 The lower elevation becomes predominantly grass and shrubs in many areas. Photo by Robert Dryja

Elevation and clouds interact to affect the amount of moisture available to support plant life.  Air rises and becomes cooler as it approaches mountaintops. Clouds develop and rain is more abundant at cooler, higher elevations. This is where the idea of four inches of tea (essentially water) fits in. The ponderosa trees receive less water at the lower elevations of Burnt Mesa.

The overall rainfall for Los Alamos is about 18 inches per year. With four inches less rainfall toward the Bandelier entrance, the trees won’t grow as fast. The four inches of depth in my teacup represents about one fifth of the average annual rainfall. A surprise is that this idea is supported by data available from the LANL Weather Machine. 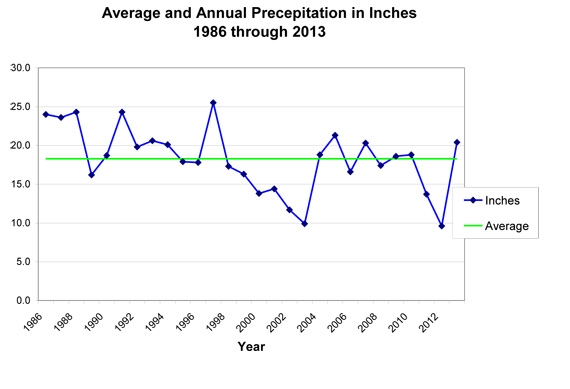 Short and long term climate changes may be having an additional impact on where and how well ponderosa trees or other plants may grow. “El Nino” refers to a relatively short term multi-year climate cycle in which more or less moisture comes to the Southwest from the Pacific Ocean. This is a result of changes in the surface temperature of Pacific Ocean water. More water evaporates into the atmosphere from a warmer ocean. Long term climate change refers to a global warming of the atmosphere that affects weather for centuries rather than decades.

We therefore can see the combined impact of elevation, moisture, El Nino and climate change as we drive from the Ponderosa campground to the entrance of Bandelier National Monument. These can be considered as setting the stage for where plants may live. However there are actors on this stage that also have an impact on plants. Elk are a major actor and we will consider next what is happening with elk.