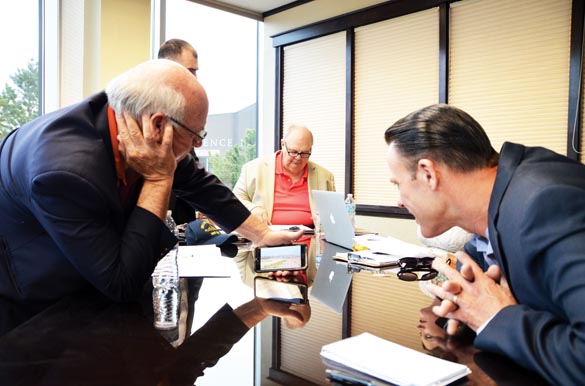 During a meeting in a Zia Realty Group conference room Tuesday, U.S. Rep. Steve Pearce, left, shows Los Alamos County Councilor James Chrobocinski a video clip on his cell of his plane as it takes off from Grants Tuesday morning as he headed to Los Alamos to meet with local leaders. Photo by Carol A. Clark/ladailypost.com
By MAIRE O’NEILL
Los Alamos Daily Post

U.S. Rep. Steve Pearce visited Los Alamos Tuesday as part of a sweeping trip through Northern New Mexico this week. He met with members of the business community, County officials, and visited the Los Alamos National Laboratory and indicated that he is investigating running for governor in 2018.

“We said we would not consider the race for governor until 100 days out, so what we’re doing is working our way across this northern district, which I do not currently represent, listening to people,” Pearce said. “We want to see what their vision is for our state for the next 30 years.”

In an interview with the Los Alamos Daily Post, Pearce mainly focused on the need for jobs, the health care issue, the failing education system, and the importance of taking care of veterans.

“No other department shows the inefficiencies and ineptness of our Department of Veterans Affairs, which is in need of extreme overhaul. If I were in the VA, I think I would be setting aside the bureaucracy and trying to focus on the care of veterans,” he said. “We’ve made a promise that we’re going to address your healthcare. If we don’t follow through, that’s a deep indicator of our inability to keep even the basic promises. It weakens the trust that other people have, because they know that of all the people we should be watching out for, the vets are very high on our list, and if they don’t take care of them, they’re sure not going to take care of me.”

Pearce said that feeling is very rampant in society now, that people are angry, frustrated, scared and agitated about the government and its operation.

“We could go a long way by treating veterans right, and that’s where (President) Trump originates in his almost magical ability to tap into the American pulse and speak to that and then do it. It’s one thing to speak about it but implementing it is a huge deal,” he said.

Speaking of the need for jobs, Pearce said his vision for New Mexico is that he doesn’t want the state to run his grandchildren out over a job, which he said is a very simple concept. He said everyone is agreeing that the state’s education is one of the worst in the nation.

Pearce said some people believe we shouldn’t have the labs or oil and gas production or coal mines but the answer it to have them and keep the environment clean.

“You have to have a way to feed your family,” he said.

Pearce said people are wondering where the whole healthcare thing is going and if it’s going to be okay, but he believes it is going to be better than okay.

“Our bill isn’t perfect, but it’s way better than what it was headed for. I went from a no vote to a yes. Our first attempt wasn’t better than what we have … I stayed a no vote on that all the way until they pulled it,” he said. “People want to know they have peace of mind so that if their kid gets sick they can go down the street and get care for them, and if they have some emergency surgery they need or their parents need, that they’ll be able to get care. People don’t have that peace of mind now in New Mexico. It seems like it’s stuck in a ditch.”

Pearce said his decision to run for governor or not needs to come from listening to people and finding out if they like the things he has to offer, his business background, his management background, his veteran’s background, his experience in appropriations in the state legislature and his knowledge of the federal systems he believes are penalizing New Mexico.

“The Forest Service, the Bureau of Land Management, the Fish and Wildlife Service, they’re all choking down our ability to have jobs,” he said. “So, the question is, do I stay where I’m at and run for Congress, or do we run in the governor’s race where I think we can do a lot more with the weight of the state behind us. Those are the kinds of discussions we are in as we go back and forth across the state this week talking to people, asking them if they could support me and the vision I have for the state.”

Pearce said that in talking with people in Los Alamos, he found there is deep anxiety about the educational system and that there should be. He said there also is deep anxiety about whether or not the labs are going to be okay under the new president and what it’s going to mean for the people who are living here. He received a copy of the Los Alamos County Council’s federal agenda policies from elected officials Tuesday morning and said it has already been transmitted to Washington, D.C.

Other communities visited by Pearce so far this week include Grants, Espanola, Taos and Farmington.