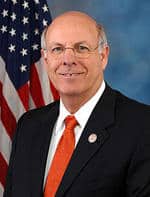 U.S. Rep. Steve Pearce
U.S. CONGRESSIONAL News:
WASHINGTON, D.C. ― The U.S. House of Representatives voted and passed H.R. 4, the Federal Aviation Administration (FAA) Reauthorization Act, with an amendment sponsored by U.S. Rep. Steve Pearce to allow the Roswell International Air Center (RIAC) in Roswell to be eligible to receive grants under the Military Airport Program (MAP).
This program allows for former military installation that have been converted to public-use, civilian airports to apply for federal dollars for a variety of projects such as hangers, access roads, or fuel farms.
“From housing one of the nation’s premier testing facilities, White Sands Missile Range, to New Mexico’s three Air Force Bases, our state has always played a critical role in our military’s development and readiness. When these facilities close, they leave a void in local economies. In New Mexico and around the nation, there are a number of former military air bases that can be repurposed to strengthen economies and opportunities for rural communities. Unfortunately, RIAC has remained ineligible to receive grant funding, severely impacting opportunities for the City of Roswell to develop the community over time,” Pearce said. “By expanding eligibility for MAP, greater assistance will be available for cities like Roswell to make necessary improvements to general aviation infrastructure, updating hangers, road access, and other airfield projects to better support the community.”
Pearce worked closely with the City of Roswell to provide a legislative fix so that the RIAC can better benefit the surrounding community and state.
“The closing of Walker Air Force Base had a severe impact on the community and economy of Roswell, New Mexico. Through its own efforts, the City has strived to maximize the economic development of the Roswell International Airport Center (RIAC). From general aviation to military flight training, RIAC is in the right location and has the flexibility to be an ideal candidate for further investment. Thanks to the efforts of Congressman Pearce, RIAC can grow as an even greater asset to the nation’s air transportation system by having eligibility for MAP funds,” stated Mayor of Roswell, Dennis Kintigh.
Background
In January 2018, Pearce introduced H.R. 4630 to clarify eligibility requirements for military airports to receive grants underMilitary Airport Program (MAP). This bill is included as an amendment in H.R. 4 which passed the U.S. House of Representatives by a vote of 393-13. The MAP funds improvement projects for former military airports that have been converted to civilian and joint use airports. These funds can be used to increase general aviation activity by financing projects such as building or updating parking lots, fuel farms, hangars, utility systems, access roads, cargo buildings, and other airfield projects at former military airports.
Currently, the FAA is only allowing airports that were formerly military bases that were closed under the BRAC process to apply for these funds. This amendment removes this arbitrary date to, ensure the FAA is following the original intent of Congress when administering this program.
Menu
LOS ALAMOS